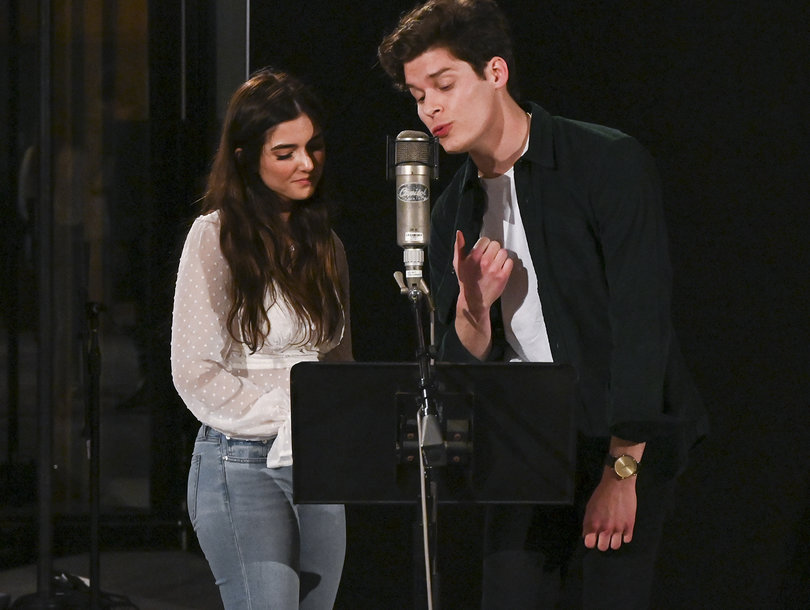 So are we watching “Listen To Your Heart” because not a lot of TV right now has new episodes airing, or, are we just watching because it’s somewhat Bachelor-related programming. I mean, nothing about it was really that ground breaking. As I told you for months, this show is done by the same exact producers who do the Bachelor. When you watched last night, you could see the same exact type of storylines forming, the same exact lines (“can I steal you for a sec?” was uttered twice), the same exact producer manipulation that you could see from miles away, the same type of background music, etc. Nothing about this show was really anything different than what we see on the “Bachelor” in any given week outside of the singing aspect. But here’s the thing: Have you seen all these contestants IG pages? There’s only 3 people out of 23 (3 more women come in next week) have over 40k followers. Some of these people barely have 1000 followers. So for them to claim they cast some of the best musicians across the world, well, that’s a flat out lie. Outside of a few, a lot of them haven’t even performed in front a large crowd before. So don’t let them fool you into thinking they were actually casting some really great musicians first and hoped they found love on the show. It was the other way around. They just cast anyone who they deemed attractive and hoped they had some sort of music background.

So here are some thoughts on last night:

-The mansion they use is already better than the mansion they’ve used for “Bachelor/ette.” I wonder if they’re actually gonna use this one moving forward. My guess would be no just based on the familiarity of the other one and how iconic it’s become with the franchise.

-The intro videos we got were:

Bri – was engaged 1.5 years ago, but he wasn’t ready so she called it off. Gee, I wonder how far she’ll get this season?

Sheridan – Has lived in his Subaru named “Sheila,” has the long hair, the beard, from Austin, and yeah, looks a lot like guys who gig in Austin.

Bekah – She talks to herself in the mirror in her video, so, that doesn’t bode well for her future edit.

Savannah – Lives in Nashville, is a yoga instructor, and I had 3 people email me last night saying she absolutely had a boyfriend going on the show and this was strictly done for her acting career. But I haven’t gotten it confirmed yet, only because I don’t care enough to since we already know everyone on this show is going on for promotion of their career anyway.

Trevor – Former “American Idol” contestant, he’s never dated another musician, and he’s got a laundry list of women coming out of the woodwork who’ve called him a dog, a player, a cheater, and just not a good guy at all. More to come on him this season.

Jamie – the youngest one on the show at 21 and says that every guy she’s ever dated has cheated on her. Gee, I wonder who she’ll end up with at the end of this thing. SPOILER: it’s Trevor. And shocker, he’s already broken up with her. I have no idea if he cheated, but judging from his past, nobody should be the least bit surprised he didn’t even last 2 months with her.

-There weren’t any creative intros as they arrived at the mansion because they weren’t there to impress one Bachelor or Bachelorette. But Matt did think Chris Harrison was named Chris Hansen. That would be something wouldn’t it if those two switched jobs? Chris Harrison walking in on some perv who brought a bottle of lube, beer, and cookies in hopes to meet some underage teen who set him up? “You’re not here for the right reason, are you?” Lets make this happen.

-Ryan and Jamie are the first two into the mansion and they connect immediately. Ryan tells her he had seizures as a kid and had major surgery at 6 years old. She’s immediately drawn to him, which means it’s destined for disaster.

-Rudi says she’s already dated all of LA already, which is funny, since so have a lot of people on the “Bachelor.” Maybe she should try that show. I’m pretty sure we’ll be seeing Rudi in Paradise at some point. Rudi is attracted to Matt, the dude who doesn’t know who Chris Harrison is, so she should automatically lose points.

-Trevor has arrived and Jamie now wants him. I don’t know many things in this world, but I’m pretty sure I know this: Jamie will absolutely be on a future season of this show. If not the “Bachelor,” absolutely BIP. She is made for this franchise: cute, outgoing, will be a memorable contestant from this season, and was already dumped.

-Michael Todd is the resident creeper from this franchise, as within minutes, he’s trying to make out with Savannah telling her he likes her lips. He totes thinks that was an invitation to make love to her mouth and she wants no part of it. Probably because she has taste. And a boyfriend. Allegedly.

-Sheridan and Julia are hitting it off now. Julia has cystic fibrosis and she’s never dated a musician. Or so she claims. I have no idea, but it seems really weird we now have two on this show who have admitted to this. Musician is such a niche field, you’d think they want to date within that field since it’s certainly not easy to be with one if you’re not familiar with the business. Don’t think so? Ask around.

-But now Julia is flirting with Brandon and they make out. Sheridan might have to go gas up that Subaru again.

“Listen To Your Heart” – Episode 2 Thoughts, Madi Speaks Out – And Peter Responds, & What is the “Quarantine Singer?”
To Top