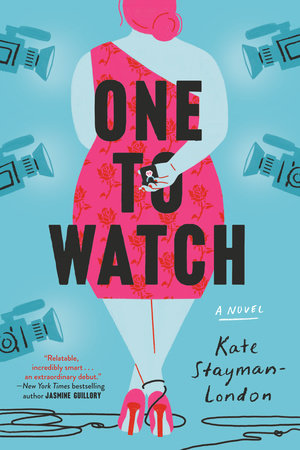 A very fun podcast this week as the author of “One To Watch,” Kate Stayman-London joins me to talk about the book, which is a fictional depiction of the “Bachelorette” essentially. In the book the lead for the season of “Main Squeeze,” is Bea, who is plus sized. Something we’ve never seen in the history of this franchise before. How will someone who knows Hollywood has never depicted many plus sized women on TV feel to now be the center of one of America’s most popular dating shows? How will she think the men on her season will view her? The book takes a lot of twists and turns that really get you to think as a reader of how we as a society view plus sized people, especially when it comes to the media. For those that haven’t read the book, the first 30 minutes of my interview with Kate is spoiler free. We don’t not talk any plot details. The following 15 minutes after that are all spoiler talk, so if you don’t want to be spoiled, I give you ample time to fast forward through or just stop listening altogether. But I want both people who’ve read the book and those who haven’t to enjoy the podcast – even though I didn’t realize that until those first 30 minutes were up. As always, if you’d like to respond to the interview, please include Kate’s Twitter handle (@_ksl) in your replies. Really enjoyed this one, I finished the book in 4 hours when I received it, and if any of you are a fan of the “Bachelor” franchise, this is a must read for you. I’m not a reader at all. Like whatsoever unless it’s sports/gambling related, or written by someone in Bachelor Nation, and I ripped through this book in no time. Easy, fun read that’ll really get you to think, I promise.

(SPOILERS) I begin by talking about the latest from “Bachelorette” filming, including hate that Clare is getting along with all the rumors and speculation. Then Kate Stayman-London joins me (18:31) to talk about her book “One To Watch,” which is about a reality TV dating show, “Main Squeeze,” where they have a plus sized female lead, and all the emotions from not only her during filming, but also the contestants. For the first 30 minutes of the interview, we don’t talk spoilers about the book. The last 15 minutes, we discuss all spoilers for those that have read the book.

Lets now discuss a few things happening with “Bachelorette” filming. The first 17 or so minutes of today’s podcast addresses all of what I’m about to write. SO MANY rumors and speculation swirling around what’s going on now. I’m sure you’ve read a ton of them – Clare was being difficult, Clare sat out a date, Clare and Dale had a pre-show relationship, Clare ended filming after 2 weeks to be with Dale, Tayshia is the new “Bachelorette,” Becca Kufrin and Hannah Ann are there, etc. So many stories, yet, no one seems to have any specific details of anything right now. There’s a reason I’ve re-posted the stories from E!, ET, US Weekly, etc. Because I want to make sure when I eventually do report on what’s going on down there, I’m not reporting rumors. I’m starting to hear things that are a liiiiitle bit different than what’s being reported in the media. When I can confirm things, then I will post about it. But until then, I did want to address a few things that are happening.

Rather than re-write exactly what I wrote yesterday on Twitter, here is my Twitter feed from yesterday where you should be able to click and read my 9 tweets on the hate that Clare is getting from fans which, quite frankly, confuses me:

Wanted to address some of the current sentiment regarding Clare and “Bachelorette” filming because I’m not understanding the hate she’s getting. First off, no one knows EXACTLY what’s going on right now. We have an idea, but not many details. That’s first and foremost…

Yes, I may be coming from a bit of a biased view because personally in dealings with Clare in the past, I really liked her. But I can always be objective. I just think the people coming at her with pitchforks for breaking some sort of imaginary “rules” that the show definitely doesn’t have, is kind of silly. Yes, she did say “respect the rules…respect me,” and maybe that was her mistake since what she was calling people out for really had nothing to do with the “rules” of the show per se. It was more a direct shot at Matt James seemingly for having a Cameo account and having a “Bachelor” tag on there when he hadn’t even appeared on the show yet. That has nothing to do with show rules as far as I know. She wasn’t telling guys not to talk to women if they were interested in being on her season, etc. So her wording was probably wrong, but we all know what she was referring to with that tweet. This is the first time in 40 seasons the lead has ever known their cast of contestants before filming, and that’s due to COVID.

One thing is for certain. This season will be unlike anything we’ve ever seen in this franchise. It’s going to be different. This will not be your mothers “Bachelorette” as the saying goes. COVID threw everything for a loop so to quote Julie Chen, “expect the unexpected.” Which brings us to the reports that Becca Kufrin, Hannah Ann, and other alumni are down at the resort as well. No one has reported exactly why they’re there, but I can say it’s not because there’s some double “Bachelorette” season, or they’re gonna make the guys choose between Tayshia and Hannah Ann, or that there’s a BIP season filming now that Clare and Dale have “ended” her season of the “Bachelorette.” NONE of those are happening. Tayshia is the “Bachelorette.” That’s a done deal. Which guys she gets, how it’ll be introduced, how many episodes will she get, etc will all come out in due time. So alumni being at the resort at this time seemingly is just chalked up to them being there to help out. They all have to quarantine for at least a week (as Becca has been there since the beginning of the week at least), so that’s that why they’re there for a while. I mean, Becca hasn’t even publicly announced her relationship status with Garrett. How would she possibly be the “Bachelorette” or immediately jump into any sort of BIP situation. Trust me, that’s not it.

Based on the schedule, it looks like Tayshia is gonna get 4-5 weeks of filming her season, with the premiere happening on Tuesday, Sept. 15th. We will see Clare’s journey and everything that happened with Dale, along with how Tayshia is ushered into the fold as the new “Bachelorette.” However, I’m starting to hear some things that aren’t lining up with what the media is saying and I’m trying to nail down the accuracy of it before I report it. Different season this time around for sure, but I guarantee you by the end of all this, you will have your spoilers as you do every season. I’m thoroughly enjoying all the chaos and confusion this season to be honest. Kinda fun. But ultimately, every season I hear fans complain about how production meddles too much, they want a love story, why does it have to be so produced, etc. If the end result is Clare found her guy, why are people pissed at the way she got there? The way I look at it, Clare seemingly has gotten her love story, Tayshia is on her journey to possibly find hers now, this show has all the buzz surrounding it they need and they don’t premiere for another 6 weeks. Seems like a win win for everyone involved.

I’ve been getting a few emails about the lack of columns these last few months, and again I find myself saying this every season, but that’s kinda the way it goes in the off season. For 4 months, there was nothing to write about. Only in the last 2 weeks was anything happening with the “Bachelorette,” and clearly info has been hard to come by. And honestly, when I have a bit of info to report, even if it’s just a few sentences or a paragraph, it’s much easier to just tweet it out and post on my IG story. It’s 2020 now. Long form columns will post on my website, but I haven’t had any stuff that warranted a few paragraphs in the last 4 months outside of today. So when I’ve got tidbits and pieces to give you, I’m gonna tweet it out and post on my IG story. It’s much easier that way. I have never, and will never, post a column on my website that’s 4 sentences long. It’s exactly what Twitter is for and I use it accordingly. Also, sometimes once I verbalize something on a podcast, it’s a little repetitive to write all that out in a column unless it’s major spoiler news, etc.

Once the season starts back up in September, we’re back to a regular schedule. Clare/Tayshia’s season is airing on Tuesdays, so it looks like “Reader Emails” will post on Tuesday’s in September, my “Bachelorette” recap will post Wednesdays, and Thursday’s will remain the podcast.

Speaking of podcast, go check out “Game of Roses” podcast today as I did an interview with them which was a lot of fun. I was introduced to them a few weeks ago when they recapped my appearance on Nick’s podcast. Very good stuff and I think you’ll enjoy me on their podcast today. A lot of fun.

As for next week’s podcast, I’m set to record with this person on Tuesday, and I’d say it’s a pretty big one. Not someone I ever expected to have on the podcast, I’ve definitely been critical of them in the past, we will discuss their time on the show and some of the heat they’ve taken, along with discussing numerous other topics. As far as I know, nothing is off limits. I don’t want to jinx anything or tell you if it’s a girl or guy. Just know I’m looking forward to this one and I know you will too.