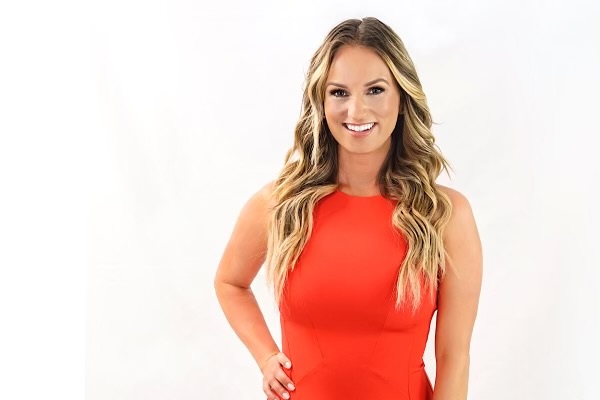 For only the second time in 237 podcasts, we are diving into the sports world for today’s podcast guest. But first, I have some news regarding Katie’s final four & discuss some news regarding “Bachelor in Paradise.” That is covered in the first 10 minutes of the podcast & written below. Then two of my favorite things are in today’s podcast: sports and gambling. If you’ve never heard of Kelly Stewart, professional sports handicapper, she’s got a great story and someone that’s risen to prominence in the sports gambling world in the last couple years. Having spoken to and met Kelly on a couple of occasions, and seen her career grow over the last two years, I’ve always been fascinated by her story. There are quite a few industries out there that are male dominated. But when it comes to sports handicapping, Kelly is on an island by herself. She’s the biggest female name in the industry that has very few women at all. You could probably count on one hand how many women are giving out sports picks for a living. Yet Kelly has carved out quite a niche for herself and has a great story. As always, if you’d like to respond to the interview, please include Kelly’s Twitter handle (@kellyinvegas) in your replies. Enjoy…

(SPOILERS) I start by giving a spoiler update on Katie’s final four & discuss some “Bachelor in Paradise” news. Then Kelly joins me (13:02) to talk about her rise to prominence in the sports handicapping industry, from how it came to be, did she always want to do this, what she did to get discovered, how she landed on Showtime’s docu-series “Action,” and much, much more.

A few weeks ago, I reported here that I’d heard Blake Moynes and Greg Grippo were in Katie’s final four. And I was 99% sure that John Hersey was as well. Then shortly afterwards, Katie posted on her social media a weekend she spent in San Diego with friends from Bachelor Nation, and I started receiving emails that one of the places she tagged she visited, Duke’s in La Jolla, was where John Hersey worked as a bartender. This led to even more people telling me that they were 100% convinced that John is who Katie chose, they’re engaged, and that’s why she went to that restaurant. I never mentioned it until now because that story wasn’t based in anything other than speculation and it never made sense to me. Well, I can report now there’s nothing to it. Why? Because I’ve learned that I was wrong about John making final 4. He didn’t. He didn’t even make Top 8. So all the people who emailed me telling me there’s a ton of people convinced Katie’s with John, sorry, but that’s not the case. He’s not in her Top 4, let alone her top 8.

I’m not sure if it was just Katie being at Duke’s in La Jolla as the reason people were convinced she was with him or if there was something else, but once again, I think this kinda plays into the idea of narratives when it comes to this franchise. If someone WANTS Katie to be with John, they can create anything they see on social media to fit that narrative. It’s very easy. But Katie is the most media savvy lead we’ve ever had. She posts non-stop about her life, where she is, etc. No lead has ever come close to posting as much as Katie has, especially before her season even starts. The John thing never made sense to me which is why I didn’t bring it up til now. Lets say she HAD chose John. I never thought she’d be that stupid to 1) visit his place of work and 2) visit his place of work WITH friends from the franchise. She’s too smart for that. There’s no way she’d be that dumb. If she had chosen him, I think she’d know through conversation and spending time with him where he lived and worked and she wouldn’t be that dumb to visit his place of work while he was working, which was the other thing that was being reported. It never made sense. And now, well, you can put that theory to rest.

A story broke yesterday about BIP that they were going to have rotating celebrity hosts, with one of them being David Spade, as Chris Harrison will not be part of BIP this season. For those that aren’t big on social media, I can tell you this hire makes sense. Spade is obsessed with this franchise. He covers it every Monday night on his IG stories, he’s friends with people in the franchise and invites them over for watch parties, and I know he’s contacted some contestants “personally,” – make of that what you will. He’s a super fan, so this makes sense on many levels. We don’t know who the others hosts are going to be, but I’m sure their names will be getting released soon.

As for who’s going down to Paradise, I was out of town this weekend so I wasn’t paying attention to which contestants posted anything about heading out of town or going off the grid. But I know people like Victoria Larson, Kelsey Weier, Victoria Paul are a few of the names. There’s obviously plenty others since the show starts with 16-18 people on it. This weekend I’ll try and get more of a list of names who I’m hearing are down there and post them on Tuesday.

One person who won’t be there is Kelley Flanagan, even though during her Q&A on IG stories yesterday, she gave people reason to think she might be. However, once she realized what she said, she then posted another story saying that yes, she will be in Mexico in 2 weeks, but not for BIP. She’s just going for vacation.

We’re back in full swing next week. Recaps on Tuesday, “Reader Emails,” on Wednesday, and podcasts on Thursdays. And basically that’ll be the schedule for the next 9 months or so since we’ve got “Bachelorette,” BIP, and Michelle’s “Bachelorette” season which will basically be back-to-back-to-back through the rest of the calendar year, then seemingly the “Bachelor” will be back the first Monday in January 2022 like it always is even though it hasn’t been publicly renewed yet. I expect it to be though. So while I haven’t posted much in the last 2 months since Matt’s season ended, that all changes next week. 9 straight months of content coming up. Gonna be a doozy. See ya Tuesday.