A lot of Bachelor Nation notes to get to today before giving my thoughts on the BIP finale that was about as long and drawn out as you can get. Holy Jesus that was long. As I tweeted, when a friend informed me that “Dumb and Dumber” was on at the same time on Channel 241 on DirecTV, I gotta admit, I was flipping back and forth once we were down to the final 3 couples and there were still 90 minutes left on the show. Yeah, Harry and Lloyd’s antics kept me entertained while, I’m sorry, Riley/Maurissa, Joe/Serena, & Kenny/Mari pretty much went through the motions for the remainder of the show. How can you not be entertained by two nitwits navigating their way from Providence to Aspin (yes, that’s how Lloyd spells it)? I could watch that movie 500 times and it will never not be funny. Too many classic lines. Crazy thing is it still holds up today for a movie that came out in 1994. I can’t believe that came out when I was a sophomore in college. Yikes. Don’t be hating on “Dumb and Dumber.” If you have a problem with that movie, you have a problem with yourself. It’s comedy gold.

Where do I begin? Ok, lets first start with something on Clayton’s current season of filming. We know it began a week ago at the mansion. Second rose ceremony was this past Monday, meaning rose ceremony #3 is Friday. Obviously, Jesse Palmer has to be there for rose ceremonies. But as we know last weekend, Jesse was in Connecticut for his college football Saturday duties for ESPN. Does he make it there on time this weekend considering he’s in LA late Friday night/early Saturday morning for the rose ceremony. These are the kind of things I’m interested in seeing.

Also there’s this. Remember last month there was a week period where we knew that the next “Bachelor” was gonna be from Michelle’s season, but we didn’t know who it was yet? And remember I had told you I was hearing about a location of filming for the “Bachelor” this season and since sometimes they’ve liked filming in a Bachelors hometown that I was thinking it could be a particular person, but didn’t know? Yeah, that would’ve been wrong. Because the location I’d heard was they were looking at filming at the Houston Space Station CORRECTION: Houston Space Center. And PJ was the only guy from Houston on the show this season. That’s why I always say I hear things all the time, but need to wait to confirm things. Could’ve jumped to conclusions and assumed PJ was the Bachelor, but when you look back on it, they are hit and miss on if they film in a Bachelors hometown. They filmed in Sonoma and SF for Ben Flajnik, Miami for Juan Pablo, Iowa for Chris, Indiana for Ben Higgins, Wisconsin for Nick, and Colorado for Colton. Even went to Arizona for one date with Arie. But I’m talking full episodes. Brad, Sean, and Peter were the only 3 Bachelors in the last 10 that never did any filming in their hometown. I don’t count Matt only because he never had a chance to because of the pandemic. All this to say filming is expected to move to Houston after Friday’s rose ceremony, so they will be there starting Sunday/Monday. But I don’t believe they’re doing a date at the Houston Space Center anymore.

As you know, for the last 5 months, I’ve basically stayed away from Bachelor Nation gossip. I was called out for it, reassessed how I was affecting contestants lives by posting some of the past stuff I’ve written, and made a change. I said the only times I will do that going forward would be if either the person coming to me with information puts their name behind it/does an interview, or, if there’s photographic evidence that doesn’t compromise a source. And in these past 5 months, of ALL the things I’ve heard and seen, it has yet to happen where I felt comfortable releasing something. Then this weekend, I get sent a few pics that I can share with you today because, well, here’s photographic evidence. And this isn’t anything bad or negative info. But it’s two Bachelor Nation contestants seen together that, as far as I know, haven’t been publicly seen together until now. Although, I don’t keep up on all of them, so it’s possible they have. Anyway, the first pics are of Madi and Mike Planeta from Katie’s season together at the TX State Fair this past weekend: 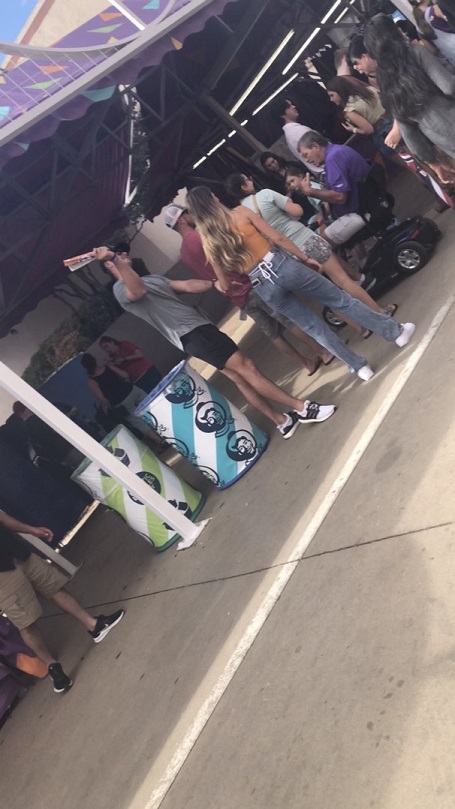 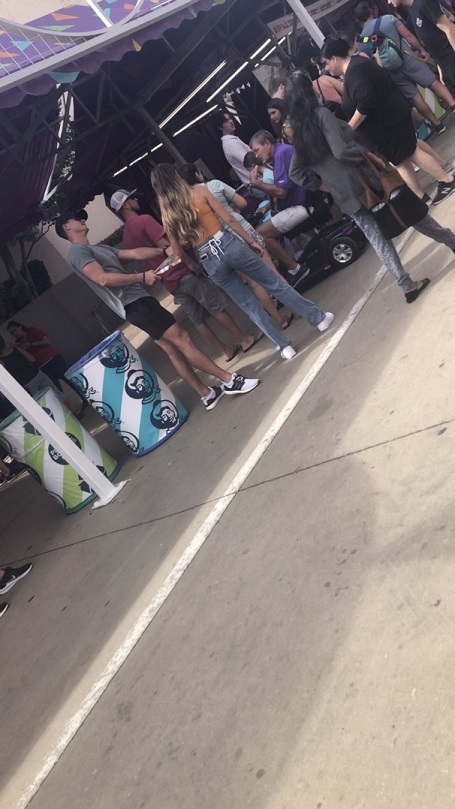 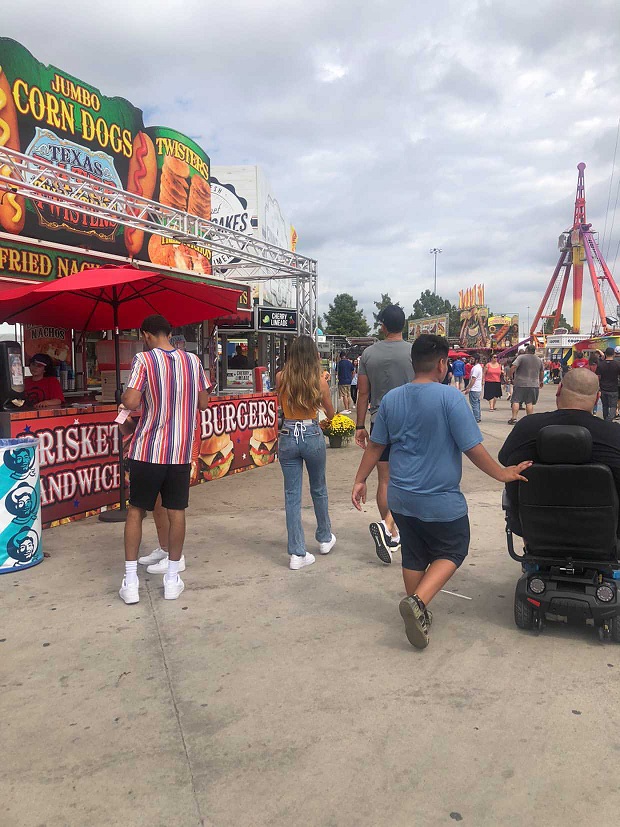 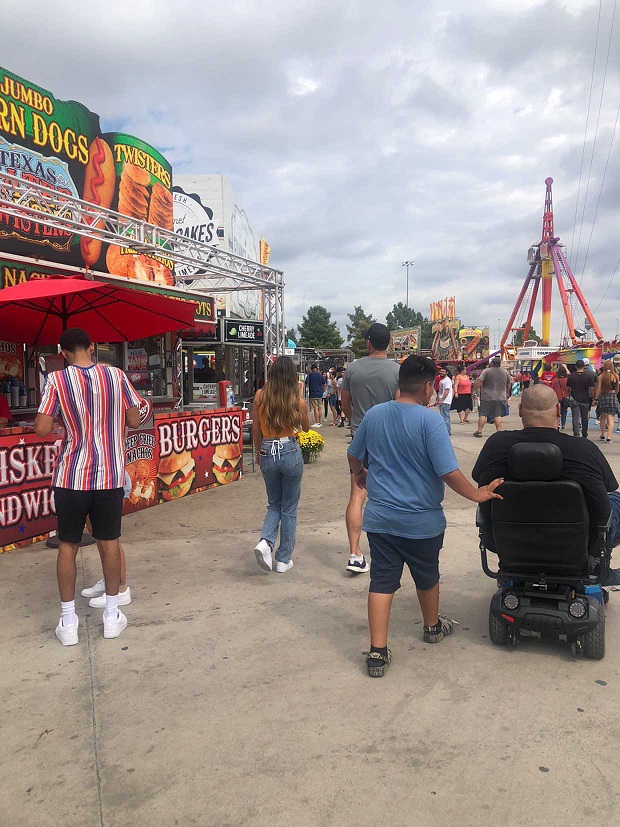 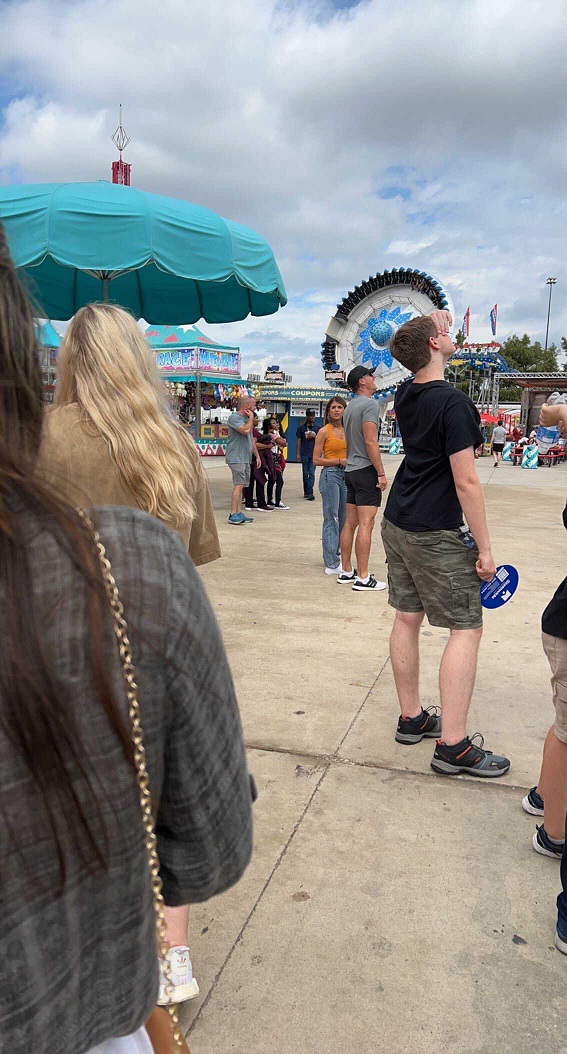 Also this past weekend, here’s a pic of Kelsey Weier and Spencer Robertson from Tayshia’s season on a catamaran in San Diego. I saw that Kelsey hasn’t hid the fact she’s in San Diego, but I didn’t see her post with Spencer unless I missed it. 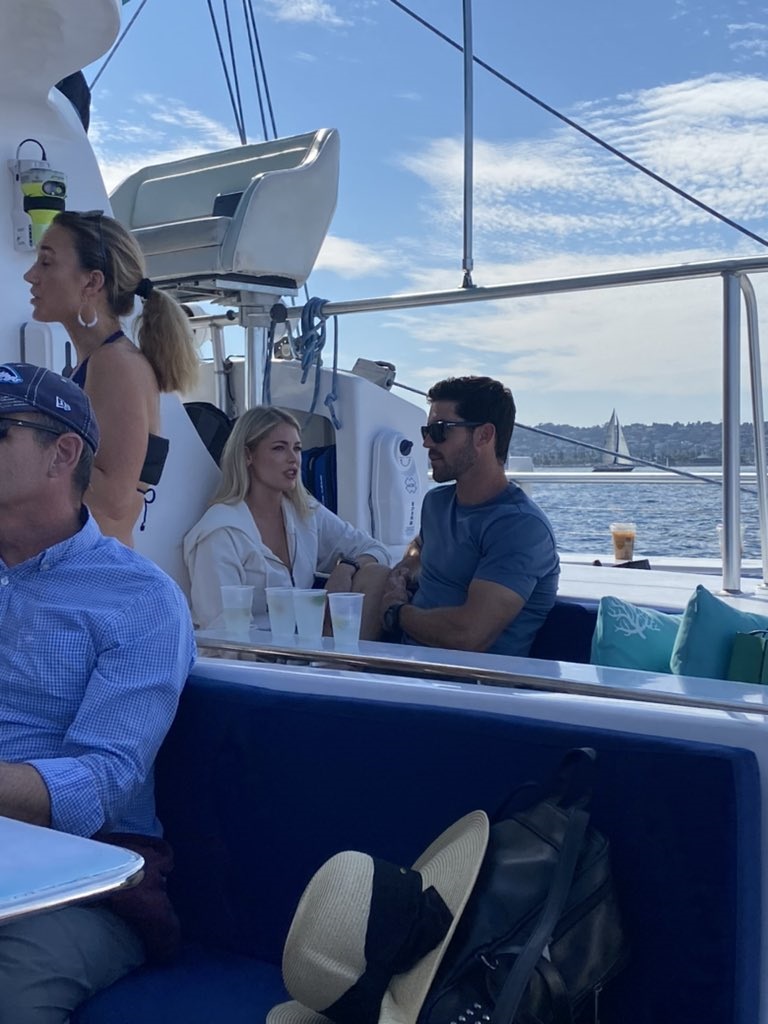 What does this mean for each “couple?” Hell if I know. But, neither Madi & Mike and Kelsey and Spencer live in the same cities, so, do with that as you will. And yes, only if it’s BN-to-BN people do I post pics. Have a few others over the last couple months with pics of someone in BN dating someone outside of BN, but those are ones I’ve chosen not to ever post about since the non-BN person isn’t someone anyone would know so they don’t need to be outed. If that BN person wants to post with them, they will. And I would expect a couple of them to probably start posting soon together now that BIP is over. You can take your guesses as to who.

I know you want the gossip. I know you love the tea. And yes, in the past I ran with a lot of stuff before anyone else did that ended up being picked up by major outlets. But also formed a narrative around contestants that wasn’t flattering. It’s just not something I feel comfortable doing anymore unless it’s under the umbrella of what I mentioned a couple paragraphs ago. Someone else puts their name behind it or photographic evidence that doesn’t out a source. I have a ton of photo evidence of either pics or text convos over the last 5 months that definitely would back up some great tea, but it’d compromise a source. These pics of these two couples don’t compromise anything really bc it was just random people that happened to see them together and get a pic in a public place. So I’m sticking to spoilers and any behind the scenes stuff that’s show related. I’ll let other people in BN (and Ducks Moy) spread gossip, yet, were the first in line to jump on my case when I did. Again…the hypocrisy in this franchise is laughable.

Yesterday I gave you the spoiler that Michelle and Nayte are engaged. But of course we’d love to know who the final 2 guy was. And until yesterday, I only had pics of who it was, but couldn’t identify who it was. So speaking of random people that just happened to see Bachelor Nation filming and send me pics of it, thanks to ABC’s preview of Michelle’s season, I’ve now been able to lock down who that final 2 guy was – Brandon Jones. Here’s the promo for Michelle’s season they ran at the end of Paradise last night:

Excuse us as we watch, rewind, and freeze-frame the special sneak peek of Michelle’s season of #TheBachelorette. See you October 19 on ABC. ? Stream on Hulu. @michelleyoung pic.twitter.com/LItAhH7Crp

About midway through, there’s back-to-back scenes of Michelle riding side-by-side horseback with a guy, then the next scene is Michelle and that same guy making out on the beach. I’ve told you for a few weeks now that I had pictures of Michelle on a jet ski date 2 days before her final rose ceremony took place (even though I was doubted I had them for whatever reason. Why would I lie I had pics when I knew I’d eventually post them once I knew who he was?), but it was from behind and I couldn’t identify the guy. I just knew it wasn’t Nayte since Nayte is 6’8” and, well, by looking at these pics, the guy in them isn’t 10 inches taller than Michelle. These were the pics I’ve had for the last month: 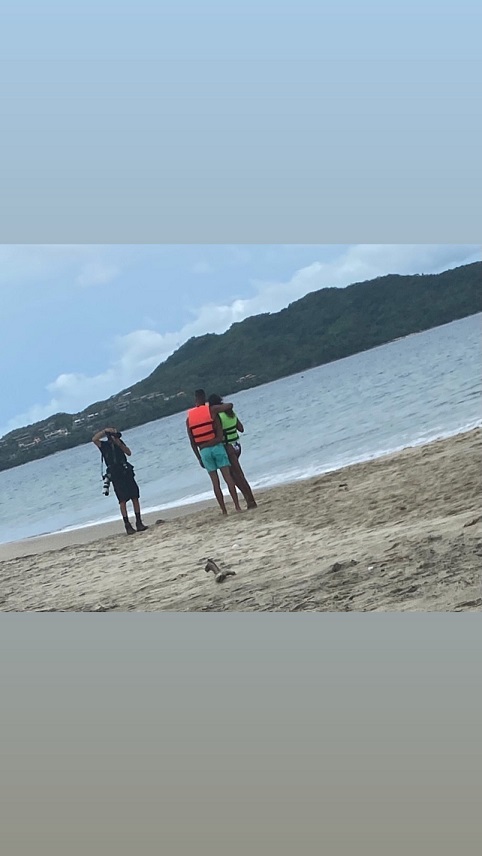 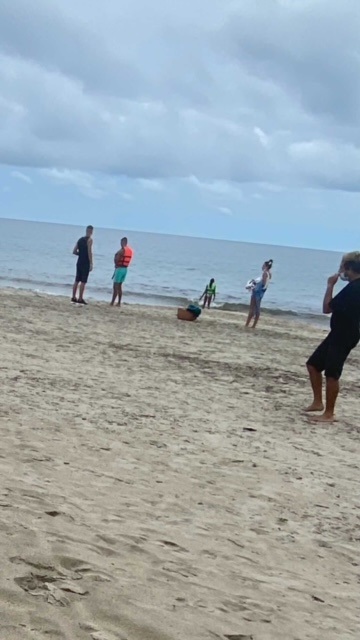 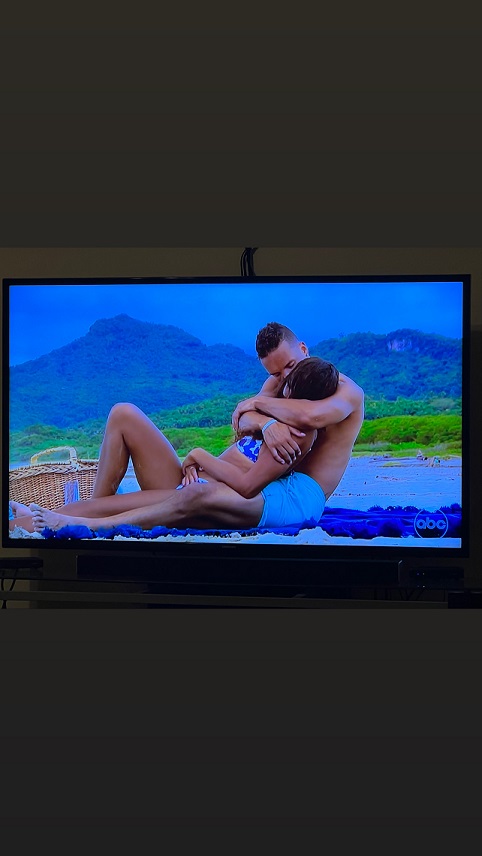 You can clearly see that the bathing suits both are in (and the background of the hills in Mexico) are the exact same of them making out on the beach. I was sent those first two pics on Sept 7th. Michelle’s final rose ceremony day was Sept. 9th. So that absolutely makes Brandon #2 and that was from their last date together. You can’t see the jet ski’s in the picture, but that’s what they were doing according to the person who took them. Funny note: production told the person who took the pics that they were shooting an Adidas commercial. Good one, production. Very believable. Yeah, the “Bachelorette” just happened to fly down to Mexico, is in a life jacket and on jet skis with another guy for an Adidas commercial. Look, anytime production for this show is seen in another country or even at the airport and they’re asked, they always lie. If a group of guys are traveling on the plane and are asked by someone else are they a team or whatever, I’ve heard in the past they’ve had to tell strangers they’re a lacrosse team/water polo team, etc. Same goes for the women. I just find it all amusing. Adidas commercial. Suuuuuuuuuuuuure.

My thoughts on the BIP finale on Page 2…