-I was surprised they spent as much time on Salley as they did. When her whole talk with Clayton ending in her rejecting his rose ended, it was 40 minutes into the episode. We hadn’t even started limo entrances at this point. As for how that all went down, I just know it wasn’t 5 hours before limo arrivals when she went to his room. The women were released on the Bachelor FB page Sat, Sept 25th. The season started filming Wed., Sept. 29th. Salley was already home by Monday or Tuesday the 26th or 27th if I remember correctly. So that convo that happened with Clayton was either the day the potential cast was released, or, the next day the 26th, which was the day she was supposed to get married. But she was definitely already back home before the first night of filming on the 29th. So them telling you it was 5 hours before limo arrivals was for dramatic effect. It wasn’t.

-Clearly from the season previews shown, and as I reported while the season is going on, Shanae is your villain this season. She’s shown arguing numerous times with the women, she shows up on the group date after party in Houston that she wasn’t supposed to be a part of and chucks their trophy, etc. You’ve seen the promo. They’re not hiding that Shanae is the one this season that’s causing drama. And while I’m sure she’ll run to some defense of “You don’t get to see everything” or whatever the new line is they all go with, I’m sorry, but those were your actions. No matter how many women you may not have liked, or no matter how much you may not have enjoyed being there, the second you become the loud one calling people out and showing up on dates you aren’t supposed to be on, you are the villain of the show. Period. End of story. I can say til I’m blue in the face that people shouldn’t equate being the villain of this show with being the worst person ever and that you should receive hate and death threats, but that falls on deaf ears every season. Unfortunately, Shanae will take a ton of shit online this season from trolls. That’s what this show has become. If she didn’t want that, there was only one way to 100% avoid that: never go on the show in the first place. Once you sign up, unfortunately, everyone is now signing up for possibly being hated on by trolls. It sucks and these people have no lives whatsoever, but it’s now become the norm for the show.

-One thing Shanae did when she got home from filming is go get baptized: 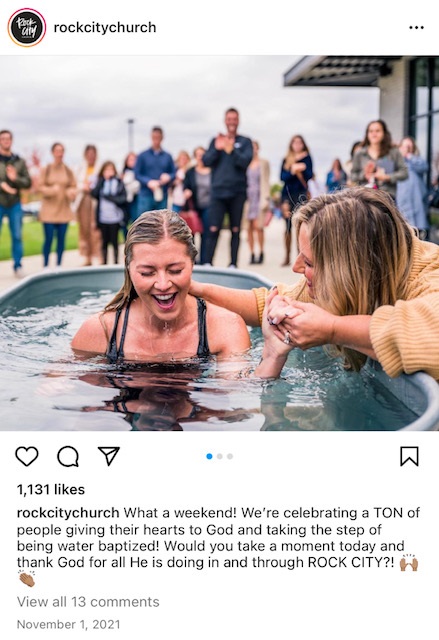 Seems like she wants to get out in front of this narrative before it gets out of control. Granted, I don’t know how many people will see that versus the amount who will see how she was on the show, but, to each their own.

-One thing Clayton definitely did last night was set the record for most women kissed on night one. I think I only remember past leads at the most kissing two or three women tops. Last night of what they showed us, Clayton kissed: Teddi, Kira, Eliza, Rachel and Cassidy. There were probably more they left on the cutting room floor. But those are the ones I remember them showing us. Man, if you weren’t on Clayton’s kissing list, you must’ve been in the bathroom or something. He was giving away kisses like Claire gave out insults.

-Speaking of Claire, I hope all of you could clearly see how drunk she got. Maybe because she wasn’t falling over herself like we’ve seen in the past it wasn’t as visible, but yeah, the speech pattern, the eyes, etc. She was drunk and probably why she was saying the things she did. I mean, she did say she hated him, but I get why she denied saying it. I don’t think she literally meant she hated him. At least that wasn’t the impression I got. It was more of, “Ugh, we didn’t hit it off at all.” But to deny she said it, because of her drunken state she was in, she wasn’t really gonna go into an explanation as to why she said it, so she just denied it. Much easier that way. Ever had a drunk person try and logically explain something to you? It’s literally the most annoying conversation ever. Claire’s exit wasn’t nearly as dramatic on TV. Clayton walked her out and we never heard from her again. No ITM’s in the car, no final conversation before he sent her away – nothing.

-Rose ceremony time. Teddi already safe with a rose. Clayton: “Thank you for being here tonight…long but eventful…truthfully believe my future wife is in this room…apologize to those I was not able to speak with…following my heart…and because producers purposely don’t let some of you see me. That’s the way this game goes.” Serene, Susie, Eliza, Rachel, Ency, Sarah, Kate, Cassidy, Elizabeth, Kira, Shanae, Sierra, Mara, Marlena, Genevieve, Melina, Gabby, Jill, Lyndsey W, Hunter.

“Clayton, ladies. This is the final rose of the evening. When you’re ready.” So while Jesse is now the new host, looks like they’re making him keep it as close to the original as possible. Instead of “night” he says “evening” now. Everything else stays the same.

Tessa gets the last rose of the night.

Your spoilers are at the top of the page on desktop where it says “Bachelor Spoilers – Season 26” or on mobile where it says “Clayton Spoilers.” As mentioned, it’s all your spoilers up to the final 3 in Iceland of Susie, Gabby, and Rachel. I’ll let you know once I find out who of those 3 he’s with. All 3 of them are being quite cagey on IG so your chances of them revealing it on there are slim and none. Because already I’ve heard people make cases for all 3 of them based on posts they’ve made and, well, that isn’t possible. I’ll also be posting the spoilers weekly on IG and TikTok. IG will go up today for rose ceremony #2. TikTok later this week once my niece teaches me how to use that thing.

Podcast #265 (And Column) – Clayton’s Episode-by-Episode Spoilers (Up to the Final 3)
The “Bachelor” Clayton – Episode 2 Recap, Cassidy Goes Off on Social Media, & Bachelor Nation Relationships
To Top