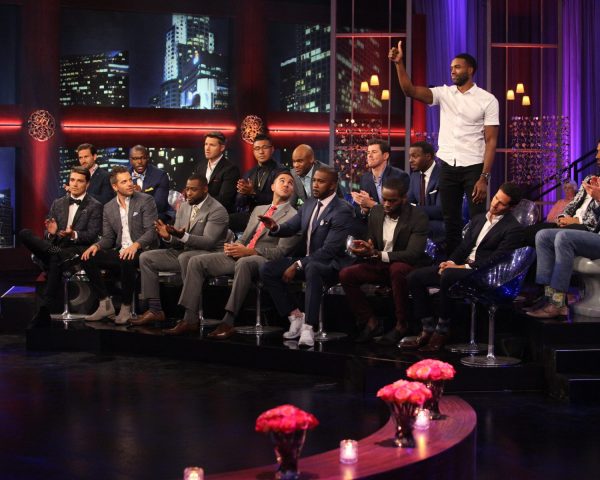 -A majority of the show focuses on the Kenny/Lee drama. Kenny handled it about as well as you could. I’ll say this for Lee: he could’ve handled it a lot worse. After how he acted on the show, and the tweets that got posted during his time on there, he only had one real reason for showing up to the MTA and that was to apologize. You can question his sincerity (which a lot of people are) and you can say he only did it because he got caught, but, the fact is he actually did it. If he put up ANY sort of resistance last night and never apologized for anything, then he looks like a complete ass. He had trouble admitting and saying certain things, and there was even a part of him that did seem like he was being too cocky up there, but ultimately the guy apologized for the tweets, apologized for how he provoked on the show, and apologized to Rachel. That’s all he could really do. He had a stage full of guys firing daggers at him all night, and rightfully so, and he didn’t get agitated, he didn’t egg it on, he denounced his tweets, and he took the heat and apologized. Only his actions from this point forward will determine whether he was serious or not, but I at least give the guy props for apologizing.

-You gotta remember, Lee was cast for a role on this show. I’m sure there was barely any emotional or physical connection to Rachel for him. He went on this show to do what he did, and once he got there, with the egging of the producers, ate it up and loved playing the villain role. No different than a lot of other contestants in the past who, once they were in it, realized the role they needed to play. Some just play it better than others. The role Lee played, looking back, is probably a role he should’ve passed on. For 30 minutes he just kept telling us he has a lot to learn. Yeah, I’d say so. Like I said, it only matters what he does from here on out. Anyone can apologize with words. It’s actions thereafter that determine if he’s serious or not. No different than when James Taylor came on the podcast. His apology to the girls in that text, and then what he said on the podcast is all fine and dandy, but if you don’t change your behavior afterwards, it means nothing.

-Not only did anything Jack, Tickle Monster, or Alex say get cut from the final edit of the “Men Tell All,” but Adam got called up to the hot seat and that never got shown either. Guess they needed to get rid of that filler so we could have the Kenny & Lee Race War of 2017. We got Adam Jr. sitting in the crowd last night, so there’s that. But yeah, Adam had his time on the hot seat and they showed footage of his relationship with Rachel that we never saw on the show, but alas, they didn’t think it was important enough for the audience to see that. And what does Adam care. He’s been in the Dominican Republic the last few days with Raven and the rest of the girls, which still has me shaking my head. Do I buy that? No. But hey, have fun while it lasts I guess.

-Dean on the hot seat, and then his subsequent talk with Rachel was rather comical. Only for the sole fact we know he doesn’t care. But he’s supposed to sit up there and pretend like he’s really interested in why Rachel sent him home, even though for the last 2 months he’s banged two of her friends. I’m guessing if he had his way, he wouldn’t have had to sit up there and really wonder out loud why Rachel told him she loved him but then dumped him 4 days later. Really? He’s really concerned about that when he’s moved on with multiple women since the show? His BIP edit is going to be interesting since, well, he starts off with Kristina, DLo arrives and they become a thing, Kristina leaves, then Dean dumps DLo at the end because he says he’s still in love with Kristina, only have Dean and DLo be all over each other post-show and Kristina really isn’t in the picture anymore. DLo will see the light at some point. At least we hope she does.

-Did I hear correctly when Rachel came out on stage when Kenny was talking to her he said, “If things don’t work out with Peter or Bryan, give me a call?” Ummmm, did he forget Eric is still in the running? Thought that was kind of funny. Unless he did say Eric and I missed it. But him just completely skipping over Eric in all that goes to show how they all know exactly what happened this season. Shocked the editors left that in there. Unless he did say Eric then my bad. There are a few guys from Rachel’s season that I’d definitely be interested in talking to down the road. Eric, Kenny, and Josiah are three of them. Hopefully they’ll come on the podcast at some point. Probably won’t be til next year, but hey, they should know I’m looking for them. All seem like good guys and all have three very different stories to tell.

So next week we finally reach the end. Thank God. I can honestly say this season has had so many more, “You’re wrong about Rachel and Bryan” emails than any previous season. Now, I don’t know if that’s because I initially said Peter and people not living in reality want to believe it so bad she’s with him, but man, a TON of people have come forward since June 6th saying Rachel is with Peter. I get it. You want to believe that. There’s nothing I can say apparently that’s gonna change your mind, but not only did I change the spoiler two months ago, I’ve basically mentioned in every column since then that Rachel is engaged to Bryan. I’ve basically beaten you over the head with it. Yet you know come next Monday night, there will still be people saying “You were wrong.” Comes with the territory I guess. Yes, for 3 weeks I was. But it was corrected on June 6th and talked about ad nauseum since. There isn’t one fiber in me that thinks this spoiler is wrong and hasn’t been since June 6th. That’s the best I can give you people. But just prepare yourselves next week if you’re a Peter crazy. It ain’t him.