UPDATE ADDED 2/12: After Hannah G.’s hometown is over, Hannah B. shows up to Colton’s hotel to talk to him. Ultimately leads to nothing, she does not get a hometown date, and does not go any further than that. But someone convinced her it’d be a good idea to show up while they were filming in Alabama for Hannah G’s hometown and talk to him.

So back on Nov. 28th, I originally reported your ending to the season. It was definitely different, something we’ve certainly never seen before (as I laid out in that column), but there were still some details I didn’t have. I was able to get a somewhat clearer picture of what went down. I gave you all that in the podcast last week, but here it is again:

The first overnight date with Tayshia did happen on Oct. 6th with Tayshia Adams in Sagres, Portugal. Here is a picture of them walking together near the famous lighthouse on Cabo de Sao Vicente: 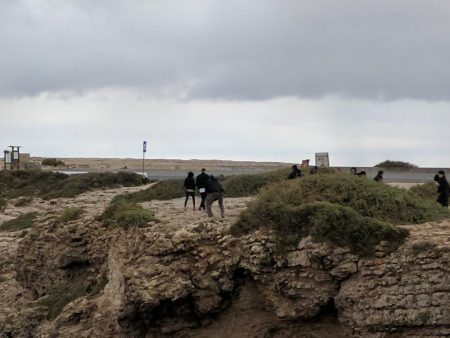 Then on Nov. 8th, he had his overnight date with Cassie. It was on this date that I heard something happened which made him make up his mind he wanted to be with her. At the time I reported it, I didn’t know what that was, but that the end result was he never went on an overnight with Hannah G. and told her he was going to pursue Cassie, then went back and told Tayshia the same thing and ended it with her. And what I had heard was the end result was that Colton and Cassie were engaged. That didn’t happen. On his overnight date with Cassie, what I was told was was that Cassie got cold feet, anxious, whatever you want to call it, and realized she wasn’t ready to be engaged yet. She told him this and essentially left the show. This supposedly is where Colton does his fence jump. He obviously wasn’t happy since the woman he wanted didn’t want what he wanted. But I guess we’ll see if it plays out as actually the time where he jumps the fence. But Cassie did leave the show at that point during overnights and went back home.

So instead of being left with two women and going through with picking one of them, he still ended things with Hannah G. without even taking her on their overnight date. Ended things with Tayshia as well, and essentially ended filming at that point. So there will be no final three rose ceremony and no final rose ceremony. I’m still really curious as to how this is going to be shown since we’ve never seen anything like this before. Whatever the case, once Cassie left and went home and Colton let Hannah G. and Tayshia go, shortly thereafter, Colton came back to the states and “chased” Cassie down, they filmed something in Southern California where he shows up and tells her they don’t need to be engaged and he wants to date her. She agrees and that’s where we are right now. They are dating but not engaged.

One response I got a lot of after the podcast last week was “Why’d she go on the show if she didn’t want to get engaged?” Well, there’s a lot of factors in regards to that. I can’t speak for Cassie’s mindset but I don’t hold that against her. Any number of things could’ve changed. No one knows why she feels that way. Maybe she felt that way before she even went on the show, maybe she didn’t. I think people understand by now that just because a couple gets engaged at the end that it means they’re going to get married. Especially since only one of the previous 22 Bachelors married the final woman he chose. So I wouldn’t jump down Cassie’s throat for that until we see it play out. Will they eventually get engaged and get married? Not a chance in hell, but hey, I’m sure some of you out there think she might come around on it. They’ll date, they’ll carry this out for x amount of months, but I don’t see this going anywhere.

We’ve still got 2 ½ months before this finale airs, so more information and an update on them can possibly still happen. I’m sure I’ll hear something over the next couple months. They’ve definitely had Happy Couple weekends together already, so they’re together. How serious it is and the fact that she initially got scared and left the show, is she all the sudden gonna be ready to be engaged in March at the ATFR? I’m guessing no, but weirder things have happened in this franchise.

How’s it’s going to air, what it means for next “Bachelorette,” all that stuff I gave my thoughts on in the Nov. 28th column so no need to repeat it here. Should be interesting watching it play out. Whether you agree with Colton as the “Bachelor” or not (which a lot of people don’t), at least this season will give us something we’ve never seen before in the show’s history. Not to mention, getting any updates on them, the fight for “Bachelorette” and who ends up getting it, along with sizing up the women who will go on BIP should be interesting.

One final point to make in regards to something I said on the podcast last week with “Reader Emails” which people seem to have misinterpreted or maybe I wasn’t clear in how I presented it. Someone asked me about Blake and Brandi Cyrus and then about Blake and Kristina and I said to keep your eye out for Blake and Hannah G. and that the wheels are in motion. Let me clarify. I have no idea if Blake and Hannah G. have spoken. Hell, Hannah G. could end up being the “Bachelorette” and this would be a moot point. All I heard was that Blake is interested, as I’m sure many guys are, and that if she ends up not being “Bachelorette” and goes to Paradise, you can bet your ass she will be a lot of guys #1 option, and being right at the front will be Blake. I think I made it seem like they were already a thing and already talking and that I don’t know. I’ve just heard she’s definitely on his radar, so sorry if you got the wrong idea.

Anyway, that’ll do it for your spoilers. I’ll update anything I can as the season goes along. As I mentioned in the podcast two weeks ago, this was the first time I’d done the ep-by-ep spoilers in a podcast first before the written version. It’ll always be in written form, but whether or not it happens on a podcast BEFORE it appears on the website again in the future, I have no idea. It all depends on the season and how things are going and just if I decide to do it. But you’ll always have your episode-by-episode spoilers on the website to click on when need be. That’s never going anywhere. Enjoy.