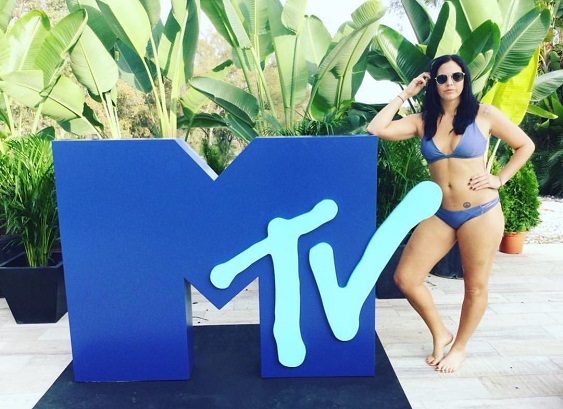 A big splash being made in the Challenge world in the last week, as former “Bachelor” contestant Danielle Maltby came out last week and shared the lies and deceit of ex-boyfriend Paulie Calafiore. Paulie responded trashing her, then Danielle teamed up with Cara Maria showing receipts, put him on blast, did an excellent podcast with US Weekly where they laid out the exact timeline of everything that happened and the amount of lies he told. At that point, Paulie did the same podcast, cried for 25 minutes straight, admitted to everything, and begged for Cara back. Then yesterday, Paulie is seen with Demi from Colton’s season in NY, and all hell broke loose. No less than 5 days after he cried on a podcast for almost a half hour straight begging to do anything to win Cara back, he’s seen with another woman who is about to become a villain on Colton’s season. Most of us know 2 + 2 = 4. I’m sure they will deny anything happened and they’re only friends, but what Paulie doesn’t understand (and apparently neither does Demi) is that due to his actions over the last 9 months with Danielle and Cara Maria, he doesn’t get the benefit of the doubt anymore. Not to mention, I’m pretty sure Demi knew EXACTLY what she was doing hanging out with Paulie. I told you in the spoilers Demi wants to be Corinne 2.0 very badly. She wants fame out of all of this, is a shoe-in for Paradise, and knows exactly what kind of attention hanging with Paulie will bring.

I asked Cara to be on the podcast yesterday, but she told me she didn’t want to do another interview about this since she’s already taken so much criticism for talking about this. I respect that. So the haters who are telling her she can’t stop talking about this and just wants attention, just know I asked her to do the podcast and she said she’d rather lay low. But because this is a big story, I wanted someone from the Challenge to weigh in and what better person than the outspoken Jemmye. We tackle all this stuff and more in the podcast today. There is an open invitation to Danielle to come on the podcast at some point if she wants as well. Not to go over the timeline because pretty much most people are in agreement this all happened. Hell, Paulie admitted it. But just to talk about how this all came to be and how she ended up being so manipulated by him. But Jemmye and I try and break down all aspects of everything that’s happened, where they go from here, if there’s a reconciliation between them, and is it really over? As always, if you want to respond to the interview, please include Jemmye’s Twitter handle (@JustJem24) in your replies.

Very rarely do I direct you to the other podcasts, but if you have no clue what’s going on with this whole situation or want a timeline of everything, here is the podcast that Danielle and Cara did together last week for 70 minutes, followed by Paulie crying for 25 minutes. You can listen here: https://itunes.apple.com/us/podcast/paulie-cara-maria-and-danielle-explain-their-relationship/id1351436080?i=1000426649573&mt=2. I can’t tell you enough how you need to listen to this because it explains everything. Not only hearing the timeline of all of Paulie’s lies and manipulation, but the pain in each of Danielle and Cara’s voices having to re-live this.

(SPOILERS) Jemmye joins me to talk about the latest developing situation in the Paulie/Danielle/Cara Maria saga, including late last night when a Twitter follower posted a picture of Paulie with Demi yesterday in NY. We talk about if anyone is on Paulie’s side, whether Paulie really is sorry, his abhorrent behavior towards both women, his IG live he did right after the story broke on People.com with Danielle, where does the relationship between Paulie & Cara Maria go from here and much, much more.