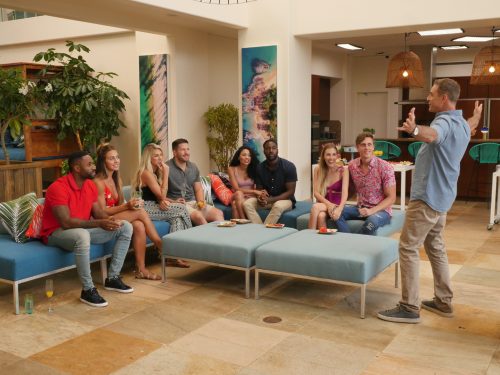 I’m really not sure how much worse it can get for Kaci. It was her idea to bring her boyfriend on this show. It was her logic-over-emotion mindset that put this now-scorching plan into motion. And after only a few weeks, it is her boyfriend declaring his burgeoning feelings to another woman, even as the woman he has been with for five years has decided for sure that their relationship is very definitely worth saving. To move forward while literally being stuck in this horrible little experiment that’s being televised to the masses, Kaci either has to take her mind off what she now knows is going on by trying to lose herself in something that, at the very least, mimics infatuation, or she can remain focused on everything she very well may lose. Listen: I know Hawaii is beautiful and spending your days hacking pineapples off a bush must be kind of fun, but when your future is dying and you feel impotent in your present, how much fun can slicing into any kind of f*cking fruit really be?

We left off last episode with Kaci watching Evan kiss Morgan. As a random viewer of this show, I can’t quite understand why Evan is so smitten with this woman. I certainly realize we are only privy to random moments between them, but we’ve been shown next to nothing to explain why Evan is all in here. That said, the why isn’t really what we should be focusing on. Evan is into someone new, his actual girlfriend now knows it, and if she’s able to somehow not lose her entire mind in the subsequent days because she no longer has control over how she wants her life to go, she’s a stronger person than I will ever be. When it’s Nicole’s turn to watch some footage, she gets off easy. She just watches Karl sing to Brittany, but what she sees doesn’t bother her all that much. She’s not sure if it’s because she’s allergic to the feeling of butterflies swirling around in her tummy or what, but since Nicole isn’t sitting beside a bonfire with a reality show host and breaking into heaving sobs, I’ve decided that maybe we should all become allergic to those bullsh*t butterflies that only cause confusion in the short run anyway. Kady gets to watch John lap peanut butter off another woman’s chest. It could so be worse. I mean, when he shouts out at the end that he needs some milk, the scene could have ended with him attempting to drink silicone out of some woman’s nipples and, well, that didn’t happen so, um, there’s that. Shari is up next and she sees Brittany babbling rather incoherently to Javen about how he mustn’t be scared around her. According to Brittany, Javen should be instead be sacred, and though I almost passed out from rolling my eyes after listening to such linguistic nonsense, Shari has a different reaction. She tears up. She no longer feels connected to Javen and she’s starting (starting?!?) to regret appearing on a TV show called Temptation Island. I’m not sure the host telling her that this experience will either make them stronger as a couple or make her stronger as an individual will be enough to stop her from playing out scandalous scenarios in her head all night long that all end with Javen disrobing in front of a lunatic Aquarius.

After a reflective night tinged with misery – at least for the women – a new day dawns and it’s time for the men to pick their next round of dates. But being that this is a show where producers probably sit around in a “thinking circle” during preproduction so they can best contemplate new and exciting ways to destroy the souls of others, there is a twist to the date selection this time around. The female Tempters will have to say which person they each want to go on a date with! That’s fun, right? The problem here is we don’t actually know very much about any of these women. We’ve been exposed to a grand total of (maybe) four consecutive minutes that are meant to reveal who they really are as people, but that’s not enough for most of us to invest in the will-they-or-won’t-they-achieve-eventual-romantic-joy game so there’s not a ton of stakes here. In any event, three women raise their hand to date Javen and Javen picks Hannah. At least five women raise their hand to date Karl. He chooses the Aquarius. He’s not sure if the clandestine looks she throws as she floats around the house are given only to him – they’re not – but he’s interested enough to take her out for the day. Three women raise their hand to be chosen by Evan, but this guy with a girlfriend only has eyes for Morgan. Last is John. He chooses Lindsey, the new girl with the old profile picture that Evan has already squeegeed clean from the recesses of his mind because, once again, EVAN IS ALL IN WITH MORGAN.

Mark then heads over to the other villa so the women can watch men raise their hands as a way to show interest. A ton of guys throw up their hand for Kaci and she picks Jack. A lot of them express interest in Kady also, but Kady likes that Johnny’s hand shot clear into the air first and she selects him. Her choice of date appears to crush Wynn, but Kady wants to get to know other guys, too. Three guys want to spend the day with Shari, she casually chooses James, and Val cannot help but wonder why this girl is even on this island since she’s clearly still mentally existing in a Javen-scented bubble. She probably is still living in some mental bubble, but even if that bubble were to pop, I can’t imagine Val would be the guy she’d go running towards. Nicole is last and she chooses Tyler. Wynn glowers blatantly because he cannot believe he wasn’t chosen for a date. Perhaps he and Val can bond poolside all day long and discuss the moronic choices these women are making while whomever it was who repeatedly shouted “Bullsh*t!” as the women walked away can serve them drinks with tiny umbrellas. See? All is not lost, you guys!

The date Karl and John go on with their selected women involves a boating excursion and Brittany lets us know that she totally feels a vibe with Karl. That’s nice. Human connections are so very sweet. And had she not already declared that she felt the same way for two other men in the house, I would actually maybe believe her. Javen hangs out on the beach with Hannah and allows her to apply sunscreen to his back without flinching. Growth! Elsewhere, Morgan opens up big time to Evan by telling him she has never eaten a grapefruit before. I know! Will the secrets never cease rolling between these two soulmates? Then they kiss while standing in the water and Evan lets us know (once again) that the chemistry the two share is seriously off the charts and therefore scaring the sh*t out of him.

The girls and their dates head to a luau that begins with some lawn games and it’s here we learn Johnny’s secret Life Skill is rolling a small ball between two sticks. I’m not sure how such a thing will save Kady come the apocalypse, but that sh*t has to count for something. When Shari and James sit down to talk, he patiently explains to her what this show is actually about: people in real relationships – but cracked relationships – allowing themselves to be tempted by men. Shari listens to him, nary an expression crossing her face, and then acknowledges that maybe she’s going to have to open herself up more to the process.