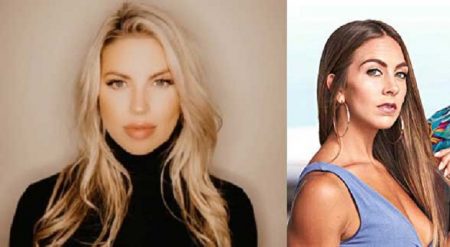 We continue our journey through “Temptation Island” this week with two more podcast guests, including our first “single” from the show. Katheryn Golden, the blonde who was John’s overnight date joins us first to talk about her journey and she has plenty to say. I knew Katheryn would be fun to talk to but even she exceeded my expectations. She certainly has no filter and doesn’t hold back in expressing her views, which is refreshing. She is up first, and then she’s followed by Nicole Tutewohl, who recorded with me while on a vacation in Maui of all places, where TI was filmed. Since we had Karl on last week, figured it’d be best to have Nicole on this week. Nicole gives her side of things, which in all honesty, pretty much matched up a lot with what Karl said. However, Nicole does fill us in on what really happened during their breakup at the final bonfire which is something I don’t think any of us knew. As always, if you want to reply to the interviews, please include Katheryn and Nicole’s Twitter handles (@Katheryn_Golden & @Nicolekayfit) in your replies. Two great interviews lasting over two hours total, so sit back, relax, grab some popcorn and enjoy.

Posted this on Twitter yesterday, but to update you on “Bachelorette” filming, here’s some bullet point notes for you:

-They are currently in Latvia filming episode 6 and 9 guys remain: Dustin Kendrick, Tyler Cameron, Connor Saeli, Luke Parker, Garrett Powell, Dylan Barbour, Mike Johnson, Jed Wyatt, and Peter Weber.
-They are staying at the Pullman Hotel in Riga, Latvia.
-Yesterday’s group date they were seen in the central market in the capital of Riga. Tyler, Connor, Luke, Dylan, Mike, Jed, and Dustin were on the date, meaning Garrett and Peter have the 1-on-1’s this week. One of them went bungee jumping in the town of Sigulda. The other 1-on-1 will be today.
-Since there was no 2-on-1 date in Rhode Island (ep 4), Scotland (ep 5), and Latvia (ep 6), pretty much confirms we won’t have a traditional 2-on-1 date this season since next week is the last week before hometowns, and they usually don’t do one then. There will be a group date that might end up down to 2 guys and she chooses one, but the traditional 2-on-1 date between two contestants who normally don’t like each other isn’t happening this season.
-“Bachelor in Paradise” has a premiere date of July 29th, meaning that would put Hannah’s finale the week before on July 22nd. Knowing her season starts May 13th, this looks to be a regular 11 episode season with no double episode weeks.

I have some more stuff to give you coming next week about some things you aren’t aware of yet that happened earlier in the season. I think you may be mildly surprised at some things. And, per usual, there is someone there who might’ve ghosted a girl he was dating and broke up with her right when he was called to LA for final casting weekend. Seems like that’s pretty much the norm nowadays.