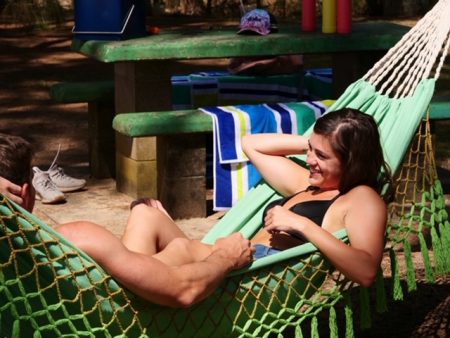 Before anyone who partook in the sweet little threesome that closed the last episode can shift the narrative to something that seems more convenient, let’s first be clear: not a bit of that “just happened.” There was ample time for any one of those pseudo adults to decide not to hop into a bed located inside of a room they know full well is rigged out with cameras. They could have come to their scattered senses in, say, the bathroom – you know, where the guy (the one who told his girlfriend she’s his one and only) was showering with another woman – or they could have halted things in the hallway leading to the bed or they could have ceased the debauchery as they stood around musing that they weren’t accustomed to threesomes. And yes, I know alcohol clouds things and I also know that’s why there’s so much alcohol on that f*cking island, but I will have far more respect if any of these desperate individuals just stands up and says, “Yup. I participated. I wanted to experiment sexually and have fun and I plan on slipping my grandparents a powerful sedative prior to this episode airing so I will not in any way be responsible for a coronary incident that could take place when they view me gyrating atop two relative strangers” than if they now choose the sheepish route on the guilt-paved highway.

Also: Tell me one more time that these Tempters came on this show to find true love. I f*cking dare you.

I don’t think we will see Kate’s innards crack into three until late in the episode, so first we must head back into Dave’s bedroom to watch three people who clearly only have the very best of intentions. Let’s remember, shall we, that up until four seconds ago Payton was obsessed with Casey, Samantha was trying to figure out how to get Dave to really like her, and Dave – well, Dave was a prick then just like he is now. His only concern is that his bed is too small for him to properly host two women, so Samantha tells Payton to go sleep in Casey’s bed instead. As for Casey, he is calmly relaxing in the hot tub with Medinah. She wants to know why he is intent on keeping every girl in the house in the friend zone, but Casey doesn’t see the friend zone thing as being anything bad. He likes that he can talk to any girl and he does not feel guilty about that and this experience is making him realize that if he and Ashley break up, he will be absolutely fine. You know who won’t be absolutely fine upon hearing that sound byte later? That would be Ashley, though once again, contestants on this show need to realize that if something like that is screened for them at a Bonfire, it’s because nothing more scandalous has gone down and they really should feel nothing besides waves of relief.

What’s that? I spoke too soon? Casey is not mumbling comforting words and is instead saying he’s not sure he actually loves Ashley? Motherf*ck…this is going to be a Bonfire for the ages. And now here comes Payton, and she’s just in time to listen as Medinah announces that The Mystery of Casey has been solved: the guy is an assh*le. An assh*le? Then he’s perfect for Payton because she seems kind of like an assh*le, too! Oh, does that sound harsh? Okay. In that case, I’ll just call Payton “psychotic” because I don’t think “confused” is a vivid enough word to describe a person who walks out of a threesome, climbs straight into a hot tub with another man that a rather wise woman just diagnosed as being an assh*le, and then bursts into tears about because said assh*le – who, again, has a girlfriend – isn’t showering her with validation. Right now would probably be a good time for Payton to just go to sleep or for Casey to swim off the island or for Medinah to be bequeathed with her very own talk show, but instead Payton cries some more and Casey stalks out of the hot tub in an attempt to put an end to the madness.

Nothing orgy or orgy-adjacent is happening at the girls’ villa, but Esonica looks great as she loses at flip cup to Kareem. Her penalty is to climb into the hot tub next to him. But we don’t see any of that sudsy cuddling because we are dropped instead into a conversation between a devastated Ashley G. and a totally apathetic KB. “Do you even care about me?” Ashley asks, and I cannot be the only person who shouted “Not even a f*cking bit!” at my TV screen. Let’s be frank here. All this guy wanted was the challenge of seeing if he could nail a girl with a boyfriend. Once he succeeded at it, the challenge was over. Still, Ashley hopes they can remain friends, and I’d say that’s a lovely sentiment except she’s attempting friendship with someone who doesn’t actually give a single sh*t about her and would prefer to spend his time perfecting his repertoire of smug smiles. Perhaps Ashley should spend her time forming a different friendship or, I don’t know, taking up needlepoint. Other Ashley, meanwhile, is finding herself in the opposite position. She’s got two men who are interested in her, but she’s concerned about how all of this could appear. If she takes Deac on her next date, Ben could be upset, but if she asks Ben out again, Casey might feel insecure. She’s not used to all these men being into her, but she finds it flattering. She decides to ask Deac on the date, and though I fully believe that this show’s entire premise is damaging to humanity in general, I will say that I’m starting to find it sweet the way Deac and Ben support Ashley. Sure, they would both very much like to be f*cking her right now instead of giving her encouraging grins, but until that’s what she wants also, they are behaving like gentlemen.

I cannot believe it’s still nighttime on this show. I also cannot believe that a woman who was just engaging in a threesome with some other guy is now stomping outside in a bikini and a fluffy towel so she can bawl over a different man – WHO HAS A F*CKING GIRLFRIEND – for not mirroring her desperate feelings. If Payton is doing anything right now, she’s showing Casey that she is an awful lot of work, and for a man who is seemingly looking for ease, this girl is basically a walking nightmare. And listen: I get that Casey made the decision to be on this show and him simply participating in such an experiment indicates that he’s interested in getting to know other women so the fact that he’s not currently feeling up someone new is baffling for those in his presence. But that he feels responsible for consoling a girl who had her tongue in some other dude’s mouth fifteen minutes ago is infuriating to me. I also cannot figure out what it is about Casey that has Payton so obsessed, but I think it’s probably because he’s one of only four men she is able to fixate on in the immediate present and she seems to me like a person who, um, likes to fixate. I know I sound judgmental here, but there’s no other way to be when you’re watching a girl say that the men she’s always been with have been assh*les, so she chose to try to find a non-assh*le BY GOING ON A REALITY SHOW POPULATED BY MEN WHO ARE QUESTIONING THEIR ABILITY TO REMAIN FAITHFUL. All of it is too moronic for words, and I hope you all enjoy Payton’s presence, because something tells me she will appear on several more low-budget reality shows in the very near future. How else is she supposed to locate her soul mate?

Also: I think Casey may be a little bit terrified of Payton.

Also: He should be.

Oh, thank the f*cking Lord – it’s finally morning! Samantha does her walk of shame out of Dave’s bedroom while Dave has the audacity to say aloud “What did I just do?” You know full well what you did, Dave! You knew it as it was happening, you chose not to stop it, and you did it knowing your choice would, as you so eloquently put it, “mess Kate up for the rest of her life.” And it’s sweet and all that the guy is capable of regret, but that regret means nothing now. Speaking of regret, the man hired to tempt her out of a relationship has ditched Ashley G., so she is searching for a new way to make her life more difficult. She decides she doesn’t want to jeopardize what she has with Rick anymore because she knows she’s already done enough to warp the man forever, but her other pressing priority at the moment is making sure all the men in her villa rush towards her any time she appears upset or mad or is burrowing beneath her bedding because she is a lady who equates attention with affection and she’d maybe lose consciousness if she didn’t get both at all times.

Also: The male Tempters think Ashley G. is in love with KB.

Also: Ashley’s forever true love is constant validation and I don’t think she cares where it comes from.

The guys’ villa must be very hot because apparently Casey sweated out all of his fight or flight instincts during the night. He wakes up and decides it would be an awesome idea to ask Payton out on the very next date. She is obviously thrilled and plans to “turn up the volume on the Casey train,” a statement that has terrified me enough that I have begun stocking canned goods in my basement. As for Dave, he’s not going to allow something like guilt prevent him from setting up his next date. He chooses Samantha because he wants to see if they are “a good fit,” and since those words are far too easy a setup for me, I’m just going to ignore them and instead hope their date involves castration. Esonica chooses Kareem for a third date while Dominique throws down the gauntlet to Kate. He wants her to either ask him out or send him home. And though she admits that he’s the only guy there who makes her heart go pitter-patter, it is for that very reason she doesn’t want to take him out. What if she does something that will disrespect her relationship – you know, the one her boyfriend respects oh so deeply and then proves it by showering with a woman, hooking up with two women, and then asking one of those women out on a date? Unwilling to risking violating the sanctity of her relationship (stop laughing), Kate asks out Aden – who is still really cute – and Dominique handles it like a champ by yelling “Send my ass home!”

Also: If as Dominique speaks you see no red flags flapping wildly, you have clearly chosen willful blindness. Good luck with that.