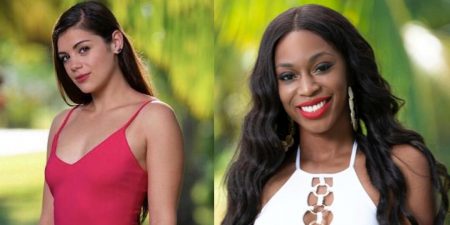 Well, you saw it all go down last night, now you get to hear from some of the people directly involved. “Temptation Island” season 2’s final bonfires and reunion show were quite the spectacle, as I warned you they were. Every outcome of the final bonfires ended up being changed by the time they filmed the reunion – Ashley G. and Rick had broken up, Ashley H. and Ben were done, Esonica and Kareem weren’t together, and Dave and Toneata lasted a hot minute. Today, you will hear from both Ashley’s, who are currently roommates now in LA. And they hold nothing back. I’m sure there will be backlash as everyone wants to get their say in, but yeah, this is all just messy. Ashley H. lets us in on how she really feels in regards to Ben, where she stands with Casey now and a whole lot more. Ashley G. definitely has some feelings on Rick and Medinah and how she approached the reunion show, only to see it’s not what she expected, and that’s why we saw her do what she did on stage. There will be more in the coming weeks from some of those on the show, and more tea will be spilled I’m sure since rumors are flying everywhere. I recorded this with the Ashleys on Wednesday, but made sure to run it today so we could cover everything you saw last night. As always, if you want to respond, please include their Twitter handles (@ashowland & @AGoldsun) in your replies. A wild and crazy season has finally come to an end, but this won’t be the last you hear from these contestants over the next few weeks as I will try to talk to as many of them as I can. Enjoy…

Ashley Howland joins me first to talk about Casey’s proposal, when she fell for Ben, what happened with Ben after filming ended, her thoughts on Casey not showing up for the reunion along with his social media rants right now, and much, much more (3:56). Then Ashley Goldson joins me to talk about what happened with Rick post show, KB’s behavior on the show, what she thinks of Rick and Medinah now, her thoughts on Kate & Dave’s relationship now, and much, much more (33:31).

Episode #25 of the “He Said, She Said” Podcast with Ashley Spivey & Peter’s Women “Officially” Announced
Podcast #162 – Interview with Samantha Hoffman and Dominique Price of “Temptation Island”
To Top