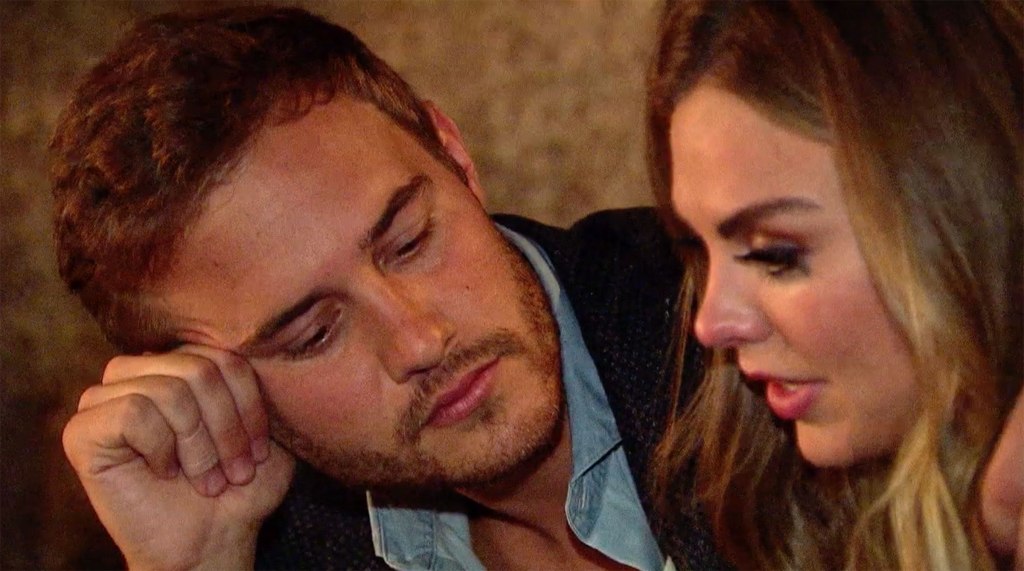 Guess what? One more day. Because I had a podcast guest having to reschedule, tomorrow I will post your rose ceremony-by-rose ceremony spoilers on the podcast and in the column tmrw. You already know all the eliminations at this point, I don’t have every group date rose or what they do on the dates overseas, but you’ll get everything I have tomorrow. I will fill in stuff as the season goes along. The press release for next week’s episode is out, and man, I think we’re gonna get a season of a bunch of “To Be Continued” episodes. Next week’s episode ends with the first group date, which is the Revolve Fashion Show. But when you think about it after this past Monday’s episode, they still need to finish up Peter’s conversation with Hannah, then Peter needs to cancel the day portion of the date, there’s still the group date after party, then the cocktail party before rose ceremony #2 where “Champagne-gate” happens, then the rose ceremony, then the Revolve group date and it’s after party. So makes sense that’s how far they get. The following week will start the Victoria P/Sydney vs Alayah drama. Expect that episode to be full of drama. Then maybe we’ll get caught up finally and episode #3 will end with rose ceremony #3. One can only hope. Who knows how they’re planning the episodes.

A couple interviews of note that came out in the last couple days. Robert Mills, he the head of alternative programming at ABC and someone who definitely is more honest in his interviews than most people when it comes to this show, spoke to Variety before Monday’s episode to give a mini-season preview. One thing he does confirm is that “when it gets to fantasy suites, she says if you’re going to be intimate with these women, this isn’t right for me, so that is an interesting conversation and that’s someone to look out for,” which is Madison of course. So yes, sex will become an issue once again this season. Also interesting response when asked about Victoria Fuller and her past with Chase Rice. Here was that Q&A part:

I know that you don’t like to label any particular contestant as a “villain,” but the viewers do. So who do you think that will be? Is it Victoria F.?

Look, I could see potentially that happening. I think there are a few women who could get the label. But, I think the way the show is produced has evolved and it’s not like, “Oh that’s the villain” anymore. There are more shades of gray and we try to explain to you more why this person is that way. At the very least, you might have people who label someone as a villain, but you’ll have more sympathy than before.

There have been a lot of rumors about Victoria, including that she dated a musician who is performing at one of her dates with Peter. Viewers are wondering if the show is over-produced. You do background checks, so obviously you know who these contestants have dated in the past. What’s your response?

Look, I can’t say that certain things just happen completely by accident. You’d have to be an idiot to buy that some of these things are just happenstance. So yes, there is a girl and there is an entertainer on one of the dates and she happened to run into him. We don’t go in saying that we’re going to reverse engineer this, but when you find out about these things, you have to take advantage of it because it is great TV. So, I wouldn’t say over-produced, but I would say very well-produced. When you watch it, you will say, “Wow, that was great TV.”

Not that we didn’t already know this, but he’s basically telling you “Of course we put her on that date because we knew of their past. Do you think we’re idiots?” We’re fighting semantics here when he compares “over-produced” to “very well-produced.”

Peter did an interview with ET Online yesterday, and the biggest thing I took out of it is that he confirmed a piece of the puzzle for us. He said that the conversation you see of his mom saying “don’t let her go, don’t let her go, bring her home to us” happened “during the final week of filming.” So we can eliminate that happening post show. Thank you for that Peter. The pieces are slowly starting to fall in place…

Ratings are in from Monday night and the show is basking in the fact that it was up 30% from Colton’s premiere last season, 6 million viewers to 5.1 last year, and a 1.9 rating vs. 1.5. What they’re casually forgetting to mention is that Colton’s premiere went up against Alabama/Clemson national championship. You might say, “that’s not the same audience,” and not that everyone who watches that game watches “Bachelor” and vice versa. It’s the fact that a major event watched by millions was happening, so naturally, it’s going to take away viewers from your show. The numbers over the years bear it out because the “Bachelor” has always had to compete with the College Football Playoff. Arie’s first two episodes had to go up against the semifinals & the national championship, and he drew 5.5 million for both. When Peter’s second episode next week goes up against LSU/Clemson, lets see if they draw 6 million. My guess is it’ll dip. It’s certainly not going to rise.