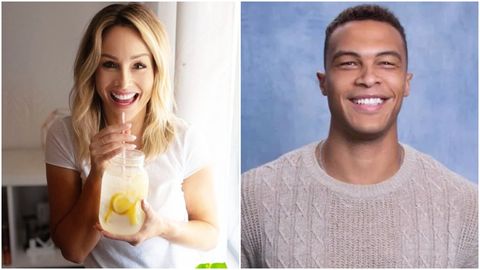 Been a crazy few weeks since the “Bachelorette” started filming on Saturday, July 18th at the La Quinta Resort & Spa in La Quinta, California. And no, it’s not to be mistaken for the La Quinta Inn which are normally right off the freeway and somewhere you stay at for $50 a night as you drive across the country. Different place. Like, by a gazillion times. But within the last week to ten days, a lot of media reports out there with “sources” and “insiders” telling them what’s going on, although none of these reports have really been able to nail down any specifics of anything for that matter. We get media stories every season, but this is a little bit different due to the nature of the situation being that Clare’s season is in one location, they aren’t traveling anywhere, and that location is basically on lockdown, so it’s not like civilians can get in and out. The pictures that have gotten out are all from photo agencies/paparazzi. There’s a lot to digest here, and if you haven’t followed on Twitter, IG, or watched my IG lives, I’m gonna catch you up on some stuff I’ve said on there. If you do follow all that, some of this will be repetitive. But since I haven’t written in a while, I wanted to put it all into a column that people can refer back to whenever. From what I’m being told, there seems to be a lot of misinformation being put out by the media sites, and that’s what I want to clear up today.

What I will say though is, you may not believe what I say today. Which is fine. Because it goes against the narrative being portrayed by the media right now. But I believe where and how I got this info is solid enough to report on. I guess it’s up to each of you individually to determine what narrative you believe. After telling you what I’ve heard, I’ll dissect this narrative and give my thoughts on it. Here’s some of the different things we’ve seen written in the media over the last week or so about Clare’s season:

-Clare quit filming
-Clare locked herself in a room and didn’t show up for a date
-Clare was being difficult and was essentially “fired” her job and replaced by Tayshia
-Clare was a problem on set, production didn’t want to work with her, and they let her out of her contract
-Clare and Dale had a pre-show relationship, that once they arrived on set, was impenetrable, therefore she decided to stop her own season and “run off” with him
-Clare got her phone back because her Twitter account liked a tweet about Tayshia being the new “Bachelorette”
-Clare and Dale are engaged

Those are just a few of the things that have been said. But you get the gist of it. Reading between the lines, essentially this narrative has been it’s been Clare controlling everything – from a pre-show relationship, to demanding to quit, to not showing up for dates, etc. What I’m here to report is that’s not what I’m hearing. In fact, I’m hearing the opposite. When I heard the report Clare and Dale were engaged, the ONLY thing that made sense to me was that “oh, well they must’ve been talking pre-show. Because if not, that means she got engaged to someone after 2 weeks (remember that part).” Logically, it was the only conclusion I could draw IF an engagement had happened. Otherwise, that’s a really quick engagement, and for someone like Clare who we know falls fast and hard (and yes, because I’m biased, someone I’m actually rooting for this season), I think a 2 week engagement would not look great for her in the public eye.

One thing NONE of these media outlets have reported on is Dale’s stance on all of this. Clare has all these feelings, Clare has fallen in love pre-show, Clare only wants Dale, Clare didn’t give any of the other guys a chance, Clare’s gonna regret this, etc. The question I kept asking myself is, don’t two people have to want this for this to all be true? Why is everything being pinned on Clare and we have no idea what Dale’s take on all of this was? Of all these stories being reported, if all true, Dale would have to be complicit as well in everything, no? Clare can want him every day of the week and twice on Sundays, and Clare can be willing to stop down a whole season for the guy, but if the guy doesn’t reciprocate those feelings, none of this happens. So where does that leave the whole situation? Here’s what I can report…

Clare and Dale are together. Whether they are engaged or not, I do not know. I would think a media outlet wouldn’t report they were engaged if they weren’t, but then again, I did during Colton and Cassie’s season, so I guess it’s possible. And again, it’s also Life & Style, who seems to write a new story every day, some even contradicting previous stories. But know this, Clare and Dale are together, Clare’s “Bachelorette” season in particular is over, and Tayshia has taken over as the next “Bachelorette.” So that part of the reporting, the basics, has been correct. And I think everyone has come to accept that over the last week or so. What I’ve been told is that this narrative of Clare being difficult, production not knowing what to do, Clare having a pre-show relationship – are not true whatsoever. So however Michelle Money knew, she was correct. Clare did not have a pre-show relationship with Dale heading into the show. Now, you can dissect that further all you want, but I’m talking about they were talking/texting/FaceTiming heading into the season, he had a leg up on everyone, their relationship had been established outside of seeing each other physically in person, etc. That I’m told did NOT happen. I’ve heard it’s just like Michelle said in her IG story, that Clare took a liking to him based on his IG feed and stories, liked what she saw, and definitely was the one guy who caught her eye heading into the show, possibly to the point where she had blinders on to the rest of them. But reports there was a pre-show relationship and this was planned between them is false.

Which brings us to Dale. What makes this information different than the media outlets is I’m hearing Dale felt the exact same way about Clare heading into the season. Like, to the point of when they met, sparks flew. She knew how much she was into him (as we heard Michelle detail), but apparently Dale revealed how much he had dug into her past and how excited he was to meet her as well. And from the beginning, basically no one else stood a chance. It was once producers noticed Clare and Dale’s chemistry that they realized they had a problem on their hands, and, in probably the biggest difference I’ve heard from what the media is reporting, is that it was production’s idea to go to Clare with a suggestion of, “Well, what do you want to do here? It’s clear you’re into him and no one else” kinda thing. And that’s where production had to think on the fly about what to do next and, eventually, settled on bringing in Tayshia as the “Bachelorette.”