Wait a second. Now you’re telling that since the NY Times bought and took over Wordle, we’re gonna have days (like today) where not everyone gets the same word? What the hell is going on here? I read some explanation on Google and it had me totally confused. But yes (no spoiler here, don’t worry if you haven’t done todays yet), apparently since NY Times bought Wordle, they eliminated some words from their list off the original list? I didn’t even know there was an original list, and wouldn’t looking at the original list kinda ruin the whole point of the game? I’m so confused at what’s going on and I need answers now dammit. And while it doesn’t change my thoughts on how I feel about Wordle and how much excitement level has dropped significantly since I started (currently on a 29 game streak since I started), I still would want to know that we’re all playing the same word every day. I think I’ll text Ashley Spivey after I’m done posting today and ask her since she’s the one who turned me on to this game in the first place. She’ll know what’s up.

Get your “Reader Emails” in for tomorrow as the batch is a little low right now. I believe I only have around 10 or so. Would like 10 or 15 more for tomorrow if that’s not asking too much. It’s so hard to even mentioning anything about the ending of this show anymore because all I do is get shit on if it’s not giving you the winner. The amount of stuff I’m hearing, the contradictory things I’ve heard, the info I’ve heard but can’t confirm…there’s a lot. Here’s an example, but from a past season that I talked about when it happened: Peter’s season. I didn’t know Peter’s winner until the weekend before the finale. But all season I had told you if you were to believe all the people in Auburn, Alabama that were saying for 3 months he chose Maddie, then that’s who he was with. I had tons of people tell me that from a week after filming ended. But I never reported the spoiler “Peter chose Maddie” in the end because although I was being told it by numerous people, none of them ever had any solid info to back it up. It was all, “this is what I heard.” Then I’d ask where they heard it from, and it’d go nowhere that was solid. So that’s what I mean when I say I don’t like reporting things I “hear.” If that were the case, I would’ve already spilled something by now. I want to know what happened and/or who Clayton is with. Not who I’m hearing he picked or what not.

I could say til I’m blue in the face “THIS IS WHO I’M HEARING CLAYTON PICKED BUT IT’S NOT CONFIRMED,” and every Tom, Dick, and Harry with 4 followers on IG will report that “Reality Steve said Clayton picked…” so I don’t bother ever posting things I’m hearing. I will put my name behind it when I feel I know for sure who he picked, not just relay things I’m hearing. And there’s a lot now that I’m hearing. Picked up this past weekend and things are kinda/sorta becoming clearer? It’s tough to say without walking you through everything I’ve heard, where I heard it from, what they said, how it fits into the season, etc. And obviously I’ll never share those details because it’d out sources, which is why I say it’s almost impossible to talk about the ending of this season publicly. You guys want to know the winner. So do I. And when I do, you’ll know.

Shanae took to IG last night to give her assessment now that she’s gone from the show. In case you missed it… 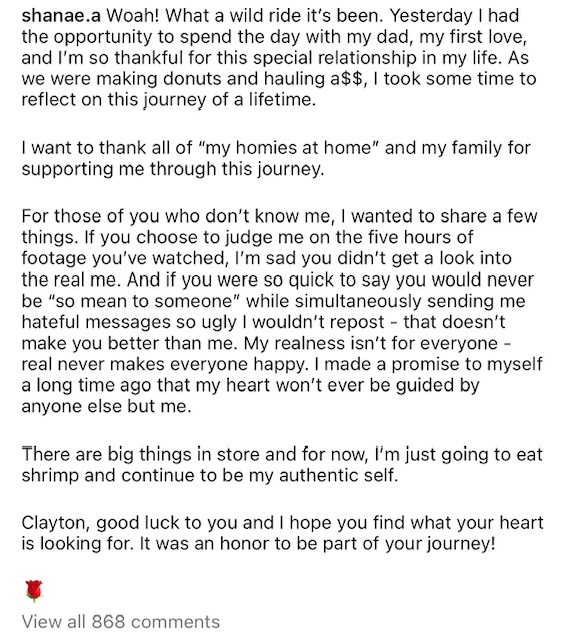 Ohhhhhhhhh, now I see. WE’RE the ones who are all in the wrong. Judging her for what we see on our television screens. How dare us? This woman is flat out delusional. She couldn’t have come across any worse on the show if she tried, she couldn’t have handled social media any worse post-show, and now she’s putting all the blame on us, took zero responsibility for anything she said or did on the show in that post, then gave a passive aggressive “good luck to Clayton” at the end, when we already know her true feelings about him once she told him to “f*** off” once she was eliminated. But hey, you and me are in the wrong here. Not her. Just remember that. Unreal.