This past weekend is one that continuously makes my sports brain explode, and that’s the NBA All-Star game. Why are we even arguing about this anymore? What’s the point? And also, when did the game turn into what it is? Kinda like the Pro Bowl that has turned into 2 hand touch and has no tackling, when did the first 3 qtr turn into, not even a pick-up game, because even those games teams play defense. There’s nothing remotely interesting about what we see in the first 3 quarters of the NBA All-Star game. At least anything outside of what Steph Curry did. Because there’s nothing impressive about wide open dunks, layups, alley oops off backboards, etc. When no one’s guarding you, and you’re a professional basketball player, there’s nothing impressive about that. Three pointers are different. Even if no one is guarding you, draining a 35 footer and turning and running back down court before it goes in is pretty cool. Everything else? Pointless. I like the Elam Ending they’ve established the last 3 years, which at least makes the 4th quarter interesting. It’s still not lock down defense being played, but you can tell they at least put out an effort to try and win. For the first 3 quarters? Garbage. Yet I hear and read so many people talking about the All-Star game like this hasn’t been going on for 10 years now. It’s like everyone has short terms memory complaining about the All-Star game. Bizarre.

Get your “Reader Emails” in for tomorrow’s column by emailing me at steve@realitysteve.com. After you read today, I’m sure you’ll have more questions. Granted, I’m probably not gonna have the answer for it and I really don’t wanna get into speculating and guessing. Everyone else will after today, no doubt. But there’s still a lot of pieces we don’t have the confirmed answers to. However, whatever you got, send it in today and I’ll do my best to navigate the questions for tomorrow.

Honestly I think the only way I’ll miss one is if it’s an “easy” word, like something that ends in “ight,” you know? Because at that point, say I determine by guess 3 that it ends in “ight,” well, it could still be “fight,” “light,” “night,” “right,” “sight,” or “tight.” What if I just guess the wrong one in my final 3 guesses? Certainly possible. Hasn’t happened yet but on something like that where you can make 4 or 5 words by just changing one letter, that’s where it could get you. In my 30 game streak, I’ve never got it in one guess, I’ve got it in 2 guesses once, and it’s never taken me 6 guesses. So almost all are 3, 4, or 5.

Well wouldn’t you know, either Friday or Saturday night, the word was “swill.” I could’ve technically gotten it on the second guess considering I knew the word started with “s” and ended in “ill,” yet, it took me to guess 6 since there were others words that fit that criteria. First time it ever has taken me 6 tries. I documented it so you know I’m not BS’ing you. 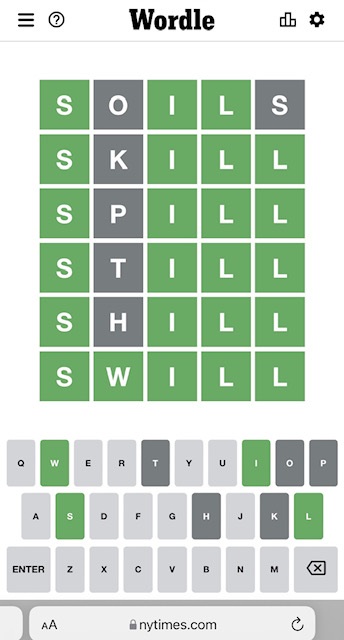 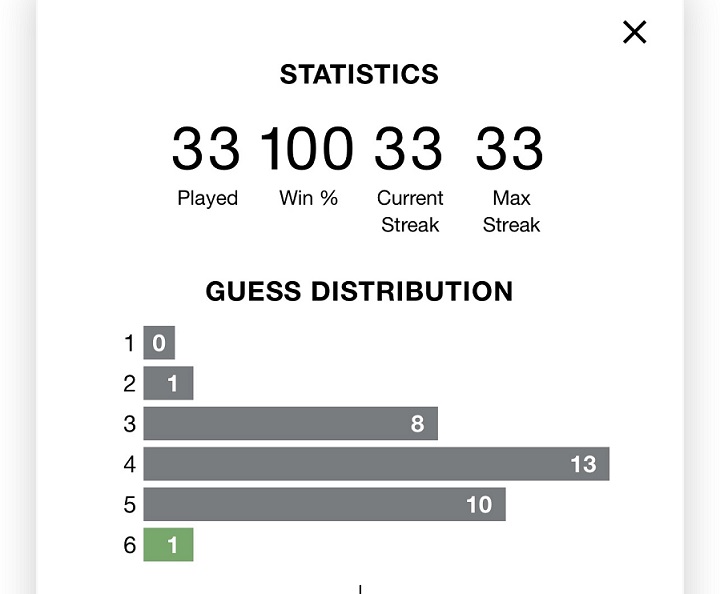 While I’m still playing it every day (I’m up to a 36 day streak now), I’m still convinced the only way I’ll miss a word is if something like that happens. Any other word that doesn’t have 3-4 different words that can be created by changing one letter, I’m gonna get within 6 tries.

I think with this season, there’s a lot of stuff that’s been said and been going on post show that say more about the season than what we’re gonna see. Clayton went on a podcast last week and referenced the promo clip that we’ve seen numerous times of him saying “I was intimate with both of you,” which we know now was said to Gabby and Rachel in Iceland at the final three rose ceremony. Well, in that interview last week, Clayton is even saying now just because you saw it that way doesn’t necessarily mean what everyone thinks it means, and that it has more context to it. I’m interested to see now what he’s talking about because I, and everyone else, all took it to mean he told both of those women to their face that he had slept with both of them during overnight dates. Not unheard of. It’s happened numerous times on this show where the male lead sleeps with more than one woman. We’d just never seen the lead tell both of them at the same time. Well, not Clayton is saying basically, hey, don’t rush to judgment. Watch it play out before you actually form your opinion. It’s definitely a curious way to word things to say “I was intimate with both of you” if he wasn’t talking about sex, but after his interview last week, now that’s on the table. Maybe he didn’t and is just horrible with words.

But there’s definitely more to the end and I finally feel comfortable with some things that I’ve heard that I can share now. Continued on Page 2…