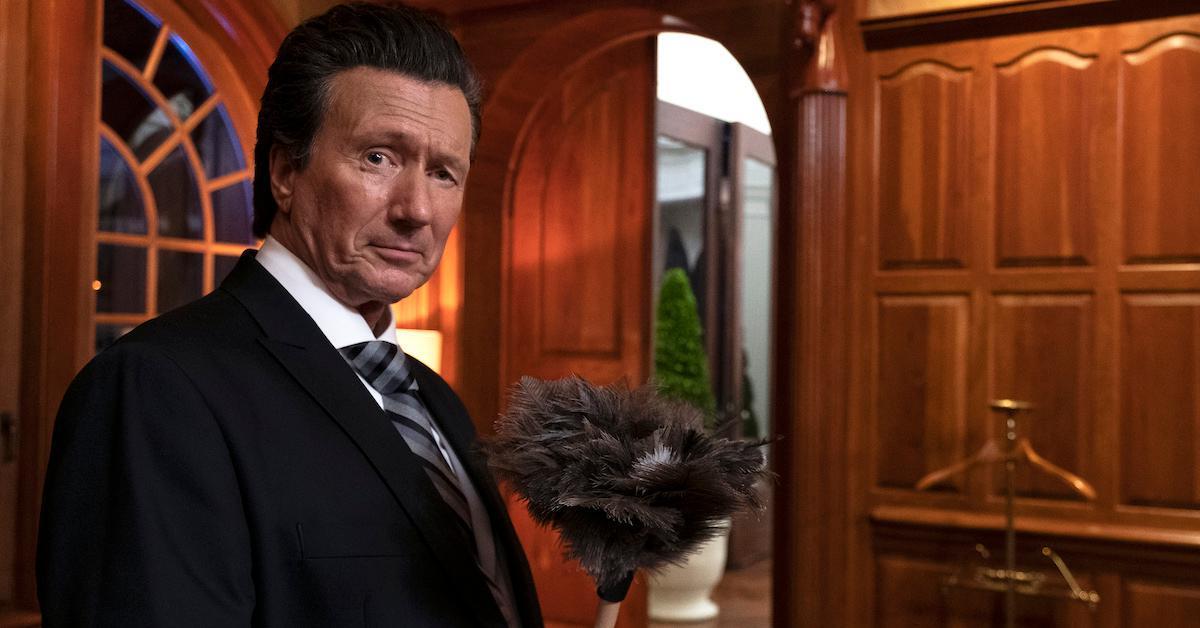 A lot to get to today since you really haven’t heard from me in a week. There’s a reason for that. I’m moving in two weeks. Not far. Just about 5 minutes from where I am now. But as any of you know, moving is just about the worst thing in the world in terms of all the things you have to do for it. So while I’d received information about the “Bachelorette” since filming began last Saturday night, I just figured I’d give it all in one space today here in the column and on the podcast, rather than space it out. Just been busy with getting things in order, throwing out trash, boxing things up, etc. So the first 20 minutes of today’s podcast I talk about the correction of Connor being on the season, debunk the gossip that’s out there about the show, tell you what the format is going to be, and fill you in on where they’re headed this season before hometowns. Then, Martin the butler from “Joe Millionaire” joins me to talk about how he got cast, his Rod Stewart parody band, what he felt his role was on the show, and much, much more. Below is a written summary of the first 20 minutes of the podcast.

(SPOILERS) I begin by correcting the Connor casting from last week, debunking some of the gossip surrounding the “Bachelorette” season, tell you what I know so far and what’s coming up this season in terms of hometowns and travel. Then Martin joins me (21:46) to talk about how he got cast as the butler on “Joe Millionaire,” his background as a singer in a Rod Stewart parody group, how he handled his role as a butler, navigating Steven & Kurt’s relationship, & much, much more.

With filming starting 5 days ago, as I said last week, since this is the first time the US show has ever had two leads throughout the whole season, we wouldn’t know anything until filming began. Once it did, I was sure I’d start hearing stuff and I’d relay it to you. There’s been a ton of gossip and speculation on what people were saying was gonna happen this season and, well, none of it is true:

We’ll get to those in a minute, but first wanna talk about what I posted last Friday, and that was that Connor the Cat, Connor Brennan from Katie’s season and Paradise, was gonna be on this Bachelorette season. Obviously a lot of you saw his response on Twitter to that post, also him being in attendance last Saturday night down in San Diego at Hunter’s 15 year sobriety party. Clearly, Connor is not on this season. That information I was given was wrong. What’s funny is, even now knowing he’s not on the season, I’m still kinda surprised. The info I was given really made me think that he was gonna be on. Obviously I can’t get into what it was or who told me, but just know it wasn’t done maliciously. Or wasn’t done for clicks. I reported what I believed to be true based on information I was given. It happened to be wrong.

Connor started getting a lot of shit on social media once I reported he was going on the show which sucked, but I’m sorry, I cannot control what the trolls say. My report was just that he’d be on the show. I didn’t offer an opinion, I didn’t say “What a loser,” “Why him,” “What’s he doing,” etc. I just said that Connor was going to be on the show and turns out he wasn’t. I don’t know why that turned into an abundance of hate thrown his way which THEN turned into it being my fault. What? While the info was incorrect, the info itself wasn’t negative at all, nor did I put any negative slant on it. Put it this way, if the info WAS true, and Connor was gonna be on the show, it still would’ve elicited the same negative response that it got. So if now I’m supposed to control the thoughts and actions of trolls on the internet, I might as well just never write another word again. If I had followed up my post by slamming Connor, saying he’s an idiot for going on, no one wants to see him, etc., THEN people would absolutely 100% have a right to say the negative reaction he was getting was started by me. I didn’t do any of that because I didn’t care either way if Connor was on or not. I was just reporting what I believed to be true, and it turned out it wasn’t.

Think about it: If it WAS true, why would Connor being on the show in the first place garner so much negativity? Check yourselves people. Who cares if he would’ve been on? Why did that make people want to spew nasty things at him? What’d he do to you? Last weeks reaction is a perfect example of why I call this fanbase Toxic Bachelor Nation. Literally people flying off the handle and attacking Connor for, at the time, thinking that he’d just be appearing on the show. I don’t get it and never will. But please, don’t put this on me. While the info itself was incorrect, the negativity spewed at him is not my doing at all. I didn’t encourage it, I’ve literally been railing against it for over a year now, and I’ve continually called out this show’s toxic fan base and told them to chill on the contestants. But per usual, it’s in one ear out the other. I’ve changed my coverage and treatment of the contestants in the last year, maybe some of you should too.

So as for some of the gossip regarding this season, lets dive into that. This notion that each girl was getting her own season within a season? I’m not sure I even know what that means. I think that maybe they were saying right from the get go Rachel would have her own men and Gabby would have hers and they’d be confined to those guys all season. Well that’s not it. It’s definitely more free flowing than that. Kind of in the same line as “Joe Millionaire,” every guy in the house, as of now, has the ability to date both women and vice versa.

Yes, there was a first night rose ceremony. I don’t know all of the eliminations but I was told it wasn’t your usual 7 or 8 eliminations. The most they could’ve started with is 33 since I reported that Corbin and Koy were definitely cut before the season started. So maybe others were cut as well and we started with somewhere between 30-32, not sure yet. But whatever we started with, I don’t believe 7 or 8 were cut on the first night per usual.

The format in past seasons while they’re still in LA has been: 2 group dates and one 1-on-1 before travel. Then once travel started, the lead would get two 1-on-1s and a group date. Thats different this season now that we have two leads.

For episodes 2 and 3 in LA, which are the first dates of the season since episode 1 is night 1 with the limo entrances and the rose ceremony, it’s one group date, then each woman gets a 1-on-1. Group date was Monday, it rained heavily in LA so I believe whatever they had planned was moved inside. Rachel’s 1-on-1 was Tuesday, Gabby’s was yesterday, and rose ceremony #2 is tonight. I don’t know who was on those dates yet. When I do I’ll let you know.

Then tomorrow will be another group date with both women, a 1-on-1 Saturday, a 1-on-1 Sunday, rose ceremony #3 on Monday, then they leave for Europe on Tuesday.

Last week I told you I knew one of the places they were heading this season and that was France. I also mentioned the rumor about the Virgin Voyage cruise that’d been linked to this show and how I hadn’t heard anything or confirmed it was the “Bachelorette” it was being used for. I can now. After they leave LA, they will fly to UK Portsmouth and board the Virgin Voyage cruise, and that will be their transportation and lodging while in Europe.

When they leave UK Portsmouth, they will dock at Le Havre, France. When I saw that, I had no idea how to pronounce it. So if you really wanna hear me butcher the shit out of “Le Havre,” go listen to the podcast. Even after googling this, I still struggled:

So France will be episode 4. From France, the cruise will then take them to Bruges, Belgium (another city I had no idea how to pronounce) for episode 5, then on to Amsterdam for episode 6. So the dates will still happen in those countries, they’re just not staying in hotels when they go there. Cast and crew are all staying on the cruise for those 3 stops. Should be interesting and definitely something different they’ve never done.

There will only be those 6 locations (3 eps in LA, 3 in Europe) before hometowns. When hometowns happen, they will be going to a split crew. Hometowns will be last week of April going by the calendar. I don’t know how many there will be for each, but on a normal season with one lead, hometowns are filmed like this:

For Gabby and Rachel, however many hometowns each get, it will still be filmed the same way, but each of them will be filming hometowns on the same day, obviously in different cities with a split crew unless they have one guy they both want in their final 3/4. So lets say April 24th is a Hometown filming day (just doing the math, it should be somewhere around that time), Gabby will be filming hers somewhere and Rachel will be filming hers somewhere else on the same day. It will either be 3 or 4 hometowns for each. I’ll know more as we get closer. But this gossip they were only getting two each is definitely wrong. Not sure where that info came from.

Just for the record, zero people have reported anything of what I just posted. Keep that in mind when you start seeing it plastered everywhere now. Same ol’, same ol’.

I don’t know where overnights and final rose ceremony are being filmed yet, but once I do, I’ll let you know. But that’s the format and every place they’ll be traveling to up through hometowns. Obviously as the season continues filming, anything new I hear I’ll be adding on all my social media platforms, so follow me there. Now, back to bane of my existence: packing. Have a great Wrestlemania weekend.

Podcast #279 – Interview with Mark Walberg, Host of “Temptation Island” & “Bachelorette” Guys, One Location for Next Season & Some Other Thoughts
Podcast #281 – Interview with Comedian and Bachelor YouTuber Dave Neal
To Top