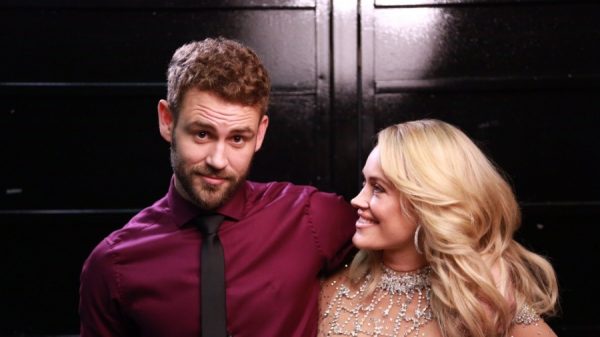 I’ve been reading for about a year now and love the layer of entertainment you add to watching the show. I have a question I hope you haven’t answered before.

Have you ever noticed the number of bachelor/ette contestants that were previously part of a fraternity or sorority in college. It seems to me that sometimes the girls who get along well with the majority of the house, also seem like they may have experience in similar situations, i.e living with sorority sisters before. I’m curious if there might be a trend there, or if we could even find the percentage of contestants who are also former Greeks.

I am probably in the minority of your readers as I haven’t watched any of the Bachelor/Bachelorette shows in years but I do read all of your columns and listen to your podcasts. I enjoy laughing about this ridiculous show and your column gives me context to what my friends/coworkers that do watch this show are talking about.

My favorite podcast has been the one with Courtney. I actually haven’t watched a season since Brad 2.0 but I remember feeling so sorry for her when Ben Fs season was airing b/c so many of the people around me did not like her. Sometimes I think people forget that this is a highly edited/manipulated show and I think they could make just about anyone look bad or good. Anyway point being she’s one of my favorite people to ever appear on this show because of how real and candid she seems. I loved listening to what she had to say and I also have read and enjoyed her book (I hope you bring her back on for another podcast I felt it went by so quickly despite it being long). I think a lot of the guests we’ll be back on again in the future. Because having them on for the first time, we get the “introduction” out of the way of covering their season, talking about what happened, their post-show life, etc. Now the next time they come on, we can just jump right into their thoughts on the current season that’s airing. So yes, I would expect to see repeats of those people in the future. But I don’t know when.

On an unrelated note I had a question for you about 24 Legacy. What are your thoughts on it? 24 is one of my favorite shows and I have watched every season of it. I will watch ever episode of this series as long as it’s on the air. That being said I’m not blown away by this reboot. Maybe it’s the fact that it isn’t Jack Bauer or maybe I just don’t find Carter too interesting? I’m hoping it peaks my interest more when Tony Almeida comes back into the picture. Can’t wait for that!

I have been a casual reader of your site for a few years and. I’ve really enjoyed listening to your podcasts, (I spend a lot of time in my vehicle for work) and they definitely help drives go by faster. I find it so amazing that you have managed to make this your full time job that you can actually make a living off of. Quite the entrepreneurial spirit! Question, have you thought about what you might do for a job or career once The Bachelor is over? I know there are no signs/reasons for it being cancelled in the near future, but I am sure it won’t stay on TV forever.

I’d been kind of wondering why Raven made it to the final two given that he seemed way more interested in/ attracted to Rachel. Then I figured it was because they wanted to make it easier to make Rachel the bachelorette. But after watching that mess I’m starting to think they had no choice but to put her in the final two or else Nick would look like an asshole sleeping with her after realizing he was only her second. My question is whether, historically, this is one of the more egregious examples of producer manipulation they’ve had. I’ve only been watching this show for a few seasons, but I can’t think anything quite as bad as them clearly getting a drunk girl with so comparatively little sexual experience to talk about her orgasms. I’m sure there are worse examples but, wow, that one really bothered me–and I don’t usually give a crap about things like that as I figure these people sign up for what they get. Anyway, thanks for a well-spoiled season. Your site gets better and better (in inverse proportion to how bad the show gets, apparently).

You built up that Vanessa fight with Rachel to be this huge thing when it wasn’t at all! Figures you would do something like that becuz you need clicks on your site. That was trash! It’s obvious that u got your information from one of the girls because it was totally biased!!! Ugh..your pathetic! I can’t believe people read your crap. Never again for me. Leave Nick and Vanessa alone what did they do to you?

Hi Steve! I just have a few observations I wanted to point out that I’ve noticed over the past few weeks:

1) If anyone is still seriously doubting that Nick chooses Vanessa, his Instagram is fairly good backup to prove that point. If you look at all the photos that Nick has posted from his dates with the girls, there is only one picture posted that includes a kiss and that is from his first one on one with Vanessa. There have been two date photos posted by Raven that involved a kiss (her hometown and Finland date) but Nick posted neither. I’m sure other girls have kissing photos as well but I only follow a few. Thought that was rather telling. I guess, but you’re telling me something I’ve known since technically the day after it happened. That’s why social media doesn’t play a role into a major spoiler like that for me. I just don’t pay attention to that stuff.

2) I don’t think I’ve ever seen a Bachelor/Bachelorette couple that I’ve ever been more sure will reach their demise than Nick and Vanessa. Like you’ve said, these two are doomed from the start. It’s obvious that Vanessa has a great life in Canada and wouldn’t want to move and we know Nick sure as hell isn’t going to Canada. However, the “connection” must be strong if he went with her over Raven. I’m sure Raven would leave Hoxie in a minute to shack up in Hollywood. I guess it really just wasn’t “there” between those two. Have you heard there were more friendship vibes and Raven knew she wasn’t going to be the last lady standing?

Hey Steve! Couple of random questions rolling around in my head so I thought I’d write. Loving the podcasts!!!! I’m surprised how candid the former contestants are being!

1. You mentioned Olivia and Nicholas in a recent column, how are they adapting to life in Dallas? It’s been an adjustment, that’s for sure. More so for Olivia than Nicholas. He’s a 4th grade boy. Not much fazes him. She’s a 12 year old 7th grade girl. It’s been tougher as you could imagine.

2. It seems from your podcasts a few of the final contestants were not familiar with the franchise before going on (specifically Clare and Courtney). Do you think this is because they were naive about the process? And other contestants may have known more and were trying to get out in time to be eligible for Bachelorette? They admitted to being naive about it. The show likes to have a few of those people on.

3. Do you think Andi showing up last night was really a shock to Nick or do they prep him ahead of time? I always wonder because I know cameras are almost always there, but it seems weird they’re there taping Nick staring into the night at the exact moment there’s a knock on the door. He knew.

4. How do you decide what TV shows you watch? I’m intrigued because you like teenage dramas like Beverly Hills, but also love dramas like 24 and FNL (which I’m finally planning to start watching this week, thanks to your recommendation!). Just curious if you watch shows based on storylines, actors, etc.

I know, the questions are all over the place, but oh well! Thanks for doing what you do! It makes watching these shows fun!

Reality Man…it’s so obvious you have a bias towards Rachel. All you do is defend her. I get that you need to not bite the hand that feeds you, but that Rachel/Vanessa story was ridiculous and how much you defended Rachel. Try and make it a little less obvious next time how much you hate Vanessa because it’s clearly shining through. Keep on doing what you’re doing!

Thanks. And you keep reading.

Please find one sentence in yesterday’s column where I defend Rachel. I didn’t offer my opinion on any of the bullet points made. It was all what was told to me, so unfortunately, you’re wrong there. And also find me the sentence anywhere this season where I said I hate Vanessa. I never have. I don’t hate her at all. In fact, I feel sorry for her. She got mixed up with the wrong guy and it’s not gonna end well for her. That’s far from hating someone. I think you should actually read what I wrote rather than have your Vanessa goggles cloud what I actually said about her.

The “Bachelor” Nick Overnight Dates Recap, Nick on DWTS, Your “Women Tell All” Spoilers, & What Happened in Bimini with Rachel and Vanessa?
Podcast #15 with Special Guest Michelle Money
To Top