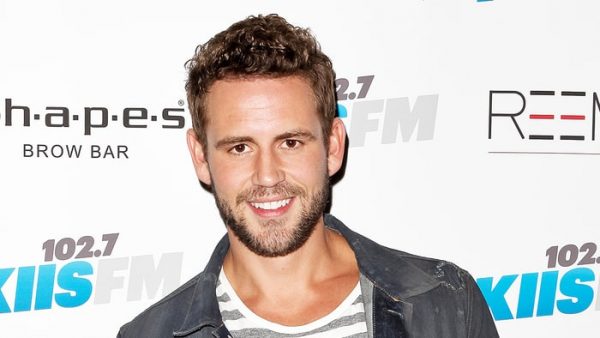 Before we get to all your “Bachelor” stuff today, can I just throw my two cents in on the Oscars fiasco? I watched it, I rewound it, I watched it again, and I’ve heard all the opinions people have on it and one thing I keep scratching my head about is this: Why is Warren Beatty getting blamed? What’d he do? If anything, he was the first one to recognize something was off as you see after he pulls the card out of the envelope realizes he’s looking at something that isn’t right (Emma Stone – Best Actress on the card), then he looks back into the envelope to see if there’s another one in there. I mean if you want to get on Warren for something, maybe you could say if he knew something wasn’t right, he should’ve said something into the microphone, but this is live TV. It’s never really happened in the history of the show (especially for the biggest award of the night), so why would he immediately think to say something? I can understand him being flustered, but I don’t think the guy did anything wrong, yet people seem to be blaming him. Hell, he never even announced “La La Land” as Best Picture. That was Faye Dunaway. Why is he taking the heat? The whole thing is just bizarre to me. We don’t know what happened backstage if Warren was handed an envelope and just walked out, or picked up the wrong one on his own. If he picked up the wrong one on his own, then it’s his fault. But he still didn’t read it out loud. He recognized immediately something was wrong. If PricewaterhouseCoopers person was back there, personally handed Warren what they believed to the best “Best Movie” envelope but it wasn’t and sent him on his way, it’s on them. Crazy night, crazy ending, but Warren Beatty did nothing wrong.

This week’s recap is broken down rather easily since I didn’t spend too much time recapping a one hour show. Page 1 has your Nick DWTS info along with other notes. Page 2 is your “Women Tell All” spoilers. Page 3 is what happened in Bimini between Rachel and Vanessa. And page 4 are my thoughts on last night’s episode.

As you know since it was all over the news yesterday, Nick will be a contestant on next season of “Dancing with the Stars”…just don’t expect him to be a part of the cast reveal tomorrow morning on GMA. My guess is they’ll hold off on Nick until after the ATFR like they did with Chris Soules. Then again, Mike Fleiss spoiled it on Twitter last night that Nick was doing the show, so maybe they will throw him on there tomorrow morning. I still doubt it. Nick will be dancing with Peta, so get ready for all the tabloid talk this season of Nick coming in between Maks and Peta, and all the stories that are so predictable from that show. The tabloids are going to have a field day running with the “Two relationships shattered!” storylines, referring to Maks/Peta & Nick/Vanessa. It’s coming. Don’t say you weren’t warned and don’t be surprised when it happens.

Speaking of Fleiss, I had a feeling Kaitlyn would have something to say about Nick making DWTS, since it’s long been known that Kaitlyn was supposed to be on until the last minute when Fleiss stepped in and said no. Here’s what she tweeted:

Actually I was offered it, had the contract & Mike Fliess told me I wasn't allowed.He said he didnt want people wanting fame after his show? https://t.co/nSzricohi4

Why Fleiss only lets his “Bachelor” leads do the show and not any of the female leads is the million dollar question. The easy answer that he gives (and the one Kaitlyn mentioned in her tweet), we know is complete BS since they’ve become very lenient on people going on to post show success in other areas lately. So saying that he doesn’t want his contestants using their show for fame is laughable since, well, ALL of them do. The more hidden answer is that Fleiss is incredibly sexist. Trista doing DWTS doesn’t count because it was the first season of DWTS, the “Bachelor/ette” was still in its infancy, and it was good for the franchise to get publicity in other areas. But yet, in recent seasons ever since Chris, Fleiss has been known behind the scenes to shy away from letting his contestants do it because he didn’t want it overshadowing his show. Radar Online reported last week that Nick wasn’t gonna be on and wasn’t on their radar as a contestant, but that’s because Fleiss hadn’t given the go ahead yet. For whatever reason, he decided to let Nick do it. With 4 former male leads now getting the gig (Jake, Sean, Chris, and Nick), Fleiss needs to let loose the reigns and let a female lead do it. It’s embarrassing and almost transparent at this point he won’t let a female do it. You don’t think people would’ve wanted to see Kaitlyn and/or JoJo on it? It makes zero sense to only let your “guys” do it and lends a ton of credibility to the sexist claims against him.

Our Nell Kalter has your Vanderpump Rules recap now up for your reading pleasure. Be sure to check in on all the happenings at SUR and whatever the hell else they do on that show. Also, wanted to get this out there early so you aren’t freaked out once the show begins, but Nell will not be covering RHOC next season. Just a heads up.

Ratings are in from last night and the show drew 7.7 million viewers and a 2.4 rating. Last season, Ben’s overnight dates (although one episode and not split into two) drew 8.1 million viewers and a 2.5 rating. With next week’s episode being 3 hours (the first hour being Rachel and Vanessa’s overnights plus the rose ceremony, and last 2 hours being WTA), I expect the rating to rise next week.

Your poll question this week is about Nick and DWTS. How do you think he’ll do? My prediction? He’s finishing top third in that group. He won’t beat Heather Morris or Simone Biles, so 3rd is the best he can hope for. But I can see him in the 4th/5th place range. He’ll beat Mr. T., Charo, the bull rider, Chris Kattan, and the retired baseball player that’s going to be on (probably, since we don’t know who it is yet). His competition of whether he’ll finish between 6th and 3rd is if he’s better than Nancy Kerrigan, Erika Jayne, and the girl from 5th Harmony.