-We get our “introduction” to Rachel, as if a season of her lasting 10 episodes just a few short months ago wasn’t enough. You know, Rachel’s a lawyer. And when you have a lawyer as your lead, you have to shoot a scene in a courtroom to make her look all legally and stuff. Only problem is, no court in America worth a damn is letting reality TV film crew just show up and film in there. Her scene was filmed at SMU in Dallas (I believe I tweeted it out that day), and everyone in the scene was asked to sign waivers to be on the show since, well, they weren’t actual people who worked in a courtroom, nor was that a real court. But hey, other than that, it was totally real. I half expected Judge Judy to be the presiding judge in that scene.

-Rachel gets to have her dog Copper with her in LA. This is big since not many dogs ever get to be on the show. In the early picture I had of Rachel and Peter’s 1-on-1 date (which happens next week), Copper is seen on that date. So not only is her dog cute, but apparently has a great picker on him since he’s choosing Rachel’s fiancé three days into filming. Not bad at all. I wonder if Copper will be the next “Bachelor.” I mean, we’ve have the “Baby Bachelor,” the “Baby Bachelorette,” isn’t it time we get a dog in there. No, Nick doesn’t count. I’m talking about an actual animal.

-It certainly was pretty weird that none of Rachel’s final four guys had intro videos, no? Without going back through every season, I can pretty much guarantee that’s never happened. At least one guy who lasts that long gets their intro video shown in the first episode. Maybe it’ll go up in the deleted scenes. Whatever the case, some of these intro videos were more about telling certain guys stories, until the last two, which were there for comedic value. Lets break these down:

Kenny: He’s the “Pretty Boy Pit Bull” of wrestling. And has a 10 year old daughter, Mackenzie. You see the promo at the end of the episode where Kenny is bleeding. All you needed to do was pause that scene to notice that wasn’t real blood. Another silly gimmick to get people thinking he got hurt when he didn’t. I mean, does this blood look real to you? Me neither. 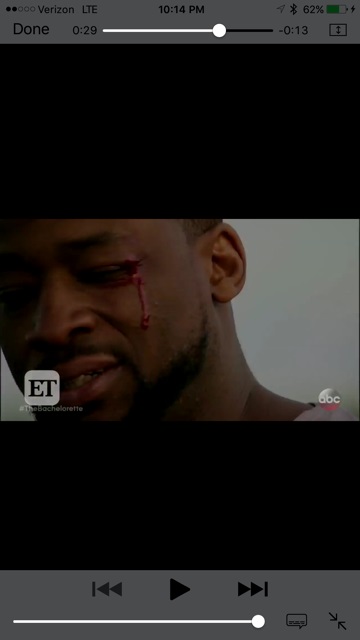 Jack: Lawyer in Dallas whose mother died when he was in high school. Pretty standard, straight forward intro video letting you know, “This story about his mother will get shoved down your throats – at least until he goes home in episode 4 during his 1-on-1 date.”

Alex: He played with Rubik’s cube. So I guess that’s cool. Can he finish that thing in like 14 seconds like that world record holder or whatever? I’d like to see him try. Pretty sure we’ll be seeing him on Paradise.

Mo: He Bollywood dances with his family and has for 20 years. Caila knew Bollywood dance moves and got to final 3. Mo does and can’t get past the first night. Which once again proves my theory: Bollywood dancing means nothing on this show.

Lucas: WWWWWWWWWWHHHHHHAAAAAAAAAAA BOOOOOOOOMMMMMMMMMM!!!!!!!!! There are no words. Except Whaboom. Learn it, live it, love it.

Blake E.: You know you’ve hit rock bottom when we’re less than 15 minutes into the episode and one dude is already talking about his penis size. Of course he is. I wonder when he and Lucas were both on “Ex Isle” together Blake would let Lucas see it? Then he’d yell “Whaboom” at the top of his lungs and all the sudden everyone’s heads would spontaneously combust.

Kenneth “Diggy”: He has 575 pairs of sneakers. Yeah, but did he fork over 5 hundy for the piece of crap Lonzo Ball shoes? Or $220 for the Lonzo flip flops?

Josiah Daniel Graham: Very formal introduction giving us his full name. We very rarely get that. With that said, Josiah almost seems too perfect. We know he doesn’t win, but the guy had the backstory, he’s funny, and basically stole the show night one. To know he doesn’t go that far is beyond me. Something tells me he’ll be crushed. Something also tells me we’ll see him in Paradise.

-Rachel gets to meet up with 7 of her girls from last season: Alexis, Corinne, Kristina, Astrid, Jasmine, Raven, and Whitney. And holy sh**!, Whitney speaks! Not only does she speak, but she relays to Rachel that another one of Nick’s girls from last season, Sarah Vendal, knows someone who knows someone who’s cousin’s friend is a former roommate with a guy who played basketball with DeMario once and his intentions might not be pure. Ummmm, why not just put Sarah on the show to say that? Seemed kinda pointless to have the mute Whitney be the one to relay that info. As I mentioned in Friday’s post, you know DeMario is the one with the girlfriend who shows up on the basketball group date next week and calls him out. Rachel basically tells him to kick rocks, and he’s dunzo. We hear the “girlfriend back home” stories it seems like every season. However, this is the first one to actually show up on the show to tell the lead about it since that one former Playboy chick showed up at the mansion during Des’ season to call out Brian Jarosinski. Can’t believe some of the sh** I remember. I can’t tell you what I had for dinner last week but I can tell you something that happened in episode two or three, 4 years ago. Go figure.

(SPOILERS) Everything You’ll See in Monday’s Premiere of the “Bachelorette”
“Reader Emails,” & The Stitcher Show That YOU Can Possibly Help Us Name
To Top