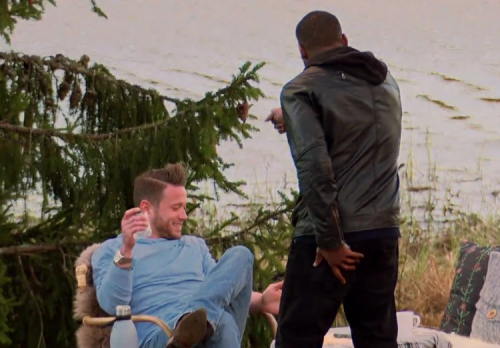 One thing I took back from NY this past weekend? A cold. It’s probably because my hotel room was nice and cool, yet outside it was muggy with 1000% humidity. That’ll do it to ya’. Or it could be all the germs from being on the plane. I’m not full blown sick yet, but my throat this morning feels like I gargled a bag of razor blades. Good times I tell ya’. Anyway, it was a fun trip. Got to see family I hadn’t seen in a while, got to eat chicken parmesan at three different restaurants, did some touristy stuff since I was staying in the heart of Times Square, and finally got to spend some time with “He Said, She Said” co-host Sharleen and her fiancé Andy Saturday night. Oh the stories we shared. There was some deeeeeep conversations going on. I guess that’s what happens when Vodka gets involved. I’ve always loved how down to earth Sharleen has been about her whole experience with the franchise so it was good to see a different side of her in person. Two great people and we had a blast together. I can’t remember the names of the three bars we visited after dinner, but there was definitely some great people watching, that’s for sure. All in all, a fun weekend, but I’m glad to be home and don’t have any trips planned for at least 3 weeks or so.

Remember, we have another new episode tonight because next week is a repeat due to the holiday weekend. The conclusion of the Kenny/Lee 2-on-1 date, the rose ceremony in Norway, then they travel to Denmark for Eric’s 1-on-1, a Viking group date, and Will gets a 1-on-1 as they head over to Sweden for the day. These were the two episodes where I was kinda confused on who went home when, so thankfully we’ll get our clarification tonight.

Tomorrow’s recap will be a tad shorter because of the fact I have “Reader Emails” to include, so get your emails in to be answered in tomorrow’s column, along with any “Dr. Reality Steve” emails for Thursday. And speaking of Thursday…we got her! Thursday’s guest for Podcast #32 is none other than DeAnna Stagliano. She’s got a busy schedule which led to the miscommunication last time, but I was able to secure time with DeAnna almost two weeks ago when we recorded and it’s a really good one. She’s the first lead we’ve ever had on the podcast, so it was really interesting to hear her thoughts being the focal point of a show. Not to mention, she gets very candid about how much she was paid to be the “Bachelorette” (it was nothing much), and she’s very clear that the way her season ended is NOT AT ALL the way she planned or wanted it to go. So glad I was able to get DeAnna on. You’re really gonna like this one. Look for that on Thursday.

Part 1 of DeMario’s sit down interview with E! aired last night, where he spoke for the first time in detail of everything that happened with Corinne. Essentially it’s almost exactly what I heard and was first to report a couple weeks ago. Now, could DeMario be lying and making all of this up? I guess it’s possible. I just don’t think he is. By every account that I’ve heard, what DeMario said on E! last night, and what you’ll hear tonight on the remainder of the interview, is what happened. Remember, Corinne never filed any complaint against the show. Her legal team hasn’t been specific about what actually happened between DeMario and her. They just said they’re investigating more. If Corinne finally speaks up and says everything DeMario is saying is a lie and she never did any of that, well, then we’ve got an interesting story on our hands. I have a feeling she won’t though. People were there and witnessed it. All of it is on camera. So it’s not like this was in some locked room, nobody knows what happened, and it’s his word against hers. We don’t even have her word yet, really. I wanna wait and see what Corinne actually says in response to DeMario before going any further. But he’s being awfully specific about everything that happened. He didn’t speak in generalities. And everything he’s saying is pretty much what I heard from my sources. This was a hook up, they talked about it afterwards, Corinne at no time thought it was inappropriate during filming until producers (who never witnessed it live or saw it on tape) filed a complaint. So lets give this a little more time, but I have a feeling this is gonna die off soon.

Last week I had an article from Ad Age about how advertisers hadn’t started pulling out of “Bachelor in Paradise” yet. Well, according to a new article from Ad Age, some advertisers are pulling out now, which is never good. If it’s a couple here and there, they can survive it. But if it’s a massive influx of advertisers who want nothing to do with the summer show, then this season might be the end of BIP and next summer they come back with something else.

And our poll question today is who you think is more at fault in the Kenny/Lee feud. I think I may know where this one is leaning.