PLEASE DO NOT READ ANY FURTHER IF YOU DON’T WANT TO BE SPOILED. Feels kinda funny that the “Spoiler Guy” has to write that on his own website, but sometimes I’m baffled by the people who contact me via email or social media to let me know they were reading on my site or were listening to the podcast but didn’t want to be spoiled. I don’t know what to tell you. I’m a spoiler site. I spoil the “Bachelor” franchise and all their shows. In my recaps, I will allude to the spoilers I initially posted. Sometimes in the podcast I will eventually give out a spoiler or whatever, hence the reason the episode description of every podcast has SPOILERS in all caps at the beginning. So let’s just lay that out there right from the get go today just in case there are people coming to a spoiler site with “EXCLUSIVE SPOILER” in the title thinking that maybe there was a slight chance I just made it up for fun and didn’t really have anything. I don’t know. Makes me scratch my head at times. Whatever the case may be, here we are, and it’s certainly been an interesting last 6 days or so…

This column is going to dive into everything surrounding the ending of this season. There will be facts, there will be commentary, and there will be speculation just so you know. And I’m going to lay out the timeline for you of when I heard things so maybe you’ll have a better understanding of it. To say this would be important to the season would be an understatement, so I want you to get the full grasp of what I’ve been dealing with since right around the premiere. So lets start there:

A couple days after the premiere, I was given word that Arie called Lauren on the night of the premiere. Certainly an interesting thing to be told because why would a lead possibly contact the girl he dumped when he’s engaged to someone else? So I tried to find out what I could about that situation and was essentially told, not necessarily the content of that conversation (because I wasn’t), but started hearing that Arie was having second thoughts about Becca and thinking he might’ve made the wrong choice. Which certainly was playing into the narrative that ARIE HIMSELF was presenting publicly as on at least three different occasions at the beginning of the season, Arie made sure to let everyone know he “fell in love with 2 women this season.” Here are at least 3 times he said it:

1) In his pre-season interview with People.

2) On Jimmy Kimmel the day after the premiere:

This one begins at the :40 second mark. And it’s a bit odd because he tells Jimmy, “I did fall in love” to which Jimmy interjects, and Arie could’ve easily just left it at that, but then still adds “with two women.” It’s like if you’re Becca in that situation, do you really need your fiancé reiterating the fact on his first national television interview that he fell in love with someone else BESIDES you this season? No woman would be ok with that.

3) On “Extra” with Mario Lopez and the clip immediately starts with Mario asking him about falling in love with two women:

Again, super bizarre behavior and certainly someone, to me, that doesn’t look at all happy with his decision at the time and was really struggling, something I was hearing behind the scenes.

Now lets move ahead to last week. Last Tuesday morning after I’d posted my column, I was told from a source specifically that “Arie broke up with Becca and they are heading to Virginia to film.” Obviously a big deal. Something that, based on stuff I’d been hearing since the premiere, not too shocking to hear, but huge enough news in the “Bachelor” world that I needed to get this double sourced at least. This source who told me that had also given me information earlier this season which ended up being right, which led me to believe this is what had happened. But I wasn’t going to just run with that immediately. There was one part of me that, although it wasn’t far fetched, the first thing I thought was, “Ok, but what if he hasn’t actually called off the engagement, he’s just going to see Lauren and apologize or something to that effect.” It was a long shot, especially since I knew he had been talking to her, but that was the one thing that was holding me up. I wanted to make sure the engagement was definitely called off. This has only happened once before in the history of the show. I needed to make sure this was right.

Not less than 6 hours later, a photo appears in a private Facebook group that ABC’s vans were out in front of Lauren’s mother’s house in Virginia, and the person who posted the picture seemed to know that ABC and Arie were there and were filming. As I told you last Wednesday, the picture itself isn’t incriminating because all it is is cars in driveway. However, knowing what I’d been told a few hours earlier, this picture took on a whole new meaning. This was the picture that circulated in a private Facebook group and was taken down within 5 minutes because people in that private group didn’t want to hear about any potential spoilers: 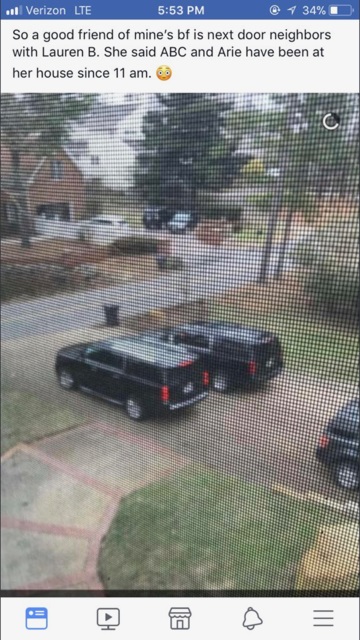 Sure, the whole “a good friend of mine’s bf” sounds like “I know someone who knows someone who knows someone who saw something etc,” but 1) When you’re told hours earlier Arie had broken his engagement off with Becca and there was going to be filming in Virginia, 2) You’re then seeing pictures of vans being there, and then 3) You’re able to confirm independently that ABC and Arie were indeed in Virginia at Lauren’s parents house, well, I was even more sure that my sources were right. But I needed one more confirmation and I got it last Friday night.

Since I don’t post on the weekends or Monday (usually), that’s why I’m posting today and can confirm to you:

Arie ended his engagement with Becca a little over a week ago and is now dating Lauren. That’s why he was in Virginia last week at Lauren’s parents house.

Plenty of people immediately thought that last week upon hearing Arie and ABC were filming in Virginia, but for the moment, lets digest that and dive into everything it means starting on the next page.