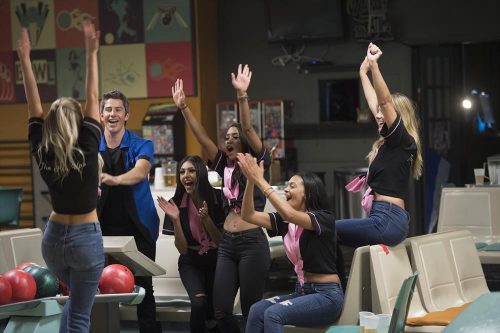 -Time for the cocktail party and people have to know where they stand. Knowing who ultimately ended up getting eliminated, the fact that the show doesn’t even care to show us Arie’s time with them at their last cocktail party kinda speaks volumes. Maquel, Ashley, and Marikh all got sent home, yet, have we ever seen any of those three have any alone time with him in the first 5 episodes? If we have, I certainly don’t remember it. And if they showed it, it was more of a quick shot rather than the time they always show us of him with Becca, Lauren, Bekah, Krystal, or Kendall. So not only did earlier in the episode they run a promo for next week’s show where you can clearly see Krystal saying “We’ll always have Paris,” but now they tried to build some suspense as to whether or not Krystal would get a rose at the rose ceremony, even though we never see any sort of connection between Arie and the three he sent home. Just thought I’d point that out to those who don’t quite follow the inner workings of this show. If you don’t get any camera time, you’re probably going home and were cast strictly to fill time.

-Kendall gets time with him at the cocktail party, and she has a book of 100 Questions that she has for I guess every guy that she dates. He picks a number and she reads the question. Knowing that this girl is basically the sole resident on Planet Kendall, it shouldn’t be the least bit surprising the question that she had for him when he picked #99. Kendall: “If you’re visiting a tribe, and their tradition would be to eat someone, would you do it?” I paraphrased, but that was basically the question. And none of us are smarter for it. Arie said no, but Kendall said she would. Which should come as no surprise considering this is a woman who downed 24 oz of donkey semen all for the sake of reality TV, then had no problem gnawing on a few worms last week. You think she’d be the least bit affected by cannibalism? Please. I can only imagine what other questions are in that book.

-We finally get to see some of Arie’s alone time with Jacqueline, and lets just say, I think everyone in the psychology field just took a bit of a hit last night. She tells Arie that she’s “infatuated” with him and “you also seem to have no ego.” I don’t know how licenses get revoked in that line of work, but could an asinine statement like that possibly lead to her losing her license? It was bad enough we had to deal with Taylor psychoanalyzing everyone last season, and now we have Jacqueline giving one of the worst observations known to mankind to a guy who clearly has her fooled. I had hope for Jacqueline in the psychology world. Now I think she’ll have a stand on the corner of 54th and 6th that says “$1 Advice.” Good luck.

-Krystal at the cocktail party lays it all on the line for everyone there by basically telling them she doesn’t want to talk to them in a group setting anymore since she knows they’re all against her and she feels like she’s attacked. So if anyone has anything to say to her face, they can do it 1-on-1. Then the line started forming to the left. Up first was Kendall, who didn’t appreciate how Krystal acted that day, but Krystal is so much in her own head right now, she doesn’t think she’s done anything wrong. Tia comes and sits in on the end of their conversation then speaks her mind, and again, Krystal isn’t listening. Then Bekah asks her why she’s still here, and Krystal can’t answer the question with any 100% certainty. Who would’ve thought that Bekah would have the right approach to her considering two weeks ago she was just getting her drivers permit?

-When Arie finally confronts Krystal, we hear something we haven’t heard before. Being at the bowling alley triggered something for her since “I grew up in a bowling alley. My mom was there all the time.” I don’t want to say that explains a hell of a lot, buuuuuuuuuuuut…No one should be traumatized by a bowling alley. Ever. They are great escapes where you can wear ugly shoes and shirts and not be judged. You can have Red Vines, nachos, and a coke until you feel like absolute hell. And you can enjoy a silly game of throwing the most disgusting ball down a lane to knock over 10 pins in the most unsanitary environment you can think of. Don’t tell me you’re traumatized by that, Krystal. It’s your happy place. Look how much fun the kids at Rydell HS had there. You saying not all bowling alleys are like that? I beg to differ, my dear.

-Rose ceremony time. Chelsea, Lauren, and Tia are safe with roses. Arie: “Great week of dates…surprising…hard choices…do see where they are going…these decisions are not easy…except they are since Maquel, Ashley, and Marikh are basically the invisible women this episode. The only three women who they never showed me talking to 1-on-1 in Ft. Lauderdale. Soooo yeah, it’s the opposite of not an easy decision.”

Bekah: I think a cool thing for her to do would be to slip him a note in his jacket pocket that says, “Do you like me? Check “Yes” or “No.” Seems appropriate.
Seinne: Seinne might still be there, but only in spirit. A week after her solid 1-on-1, barely any camera time.
Kendall: If Arie would’ve chosen #47, do you think the question would’ve been, “If I get to the fantasy suite, how much sex will you have with me? Will it be more than the other two combined?” Just curious.
Becca: I feel like we’re watching a slow death with her. It’s not going to be pretty.
Jacqueline: If she starts a podcast after the show too, I think I might off myself.
Jenna: It goes without saying, there hasn’t been a girl more drunk at every rose ceremony this season than this girl. She constantly seems plowed at the cocktail parties.

“Ladies, Arie, it’s the final rose tonight. When you’re ready. Are there any golf courses in Paris I can hit up while you guys are off filming dates? I need to bring my sticks with me since I can’t post anything on social media that doesn’t have to do with golfing or ‘Who Wants to be a Millionaire.’ That’s how deep I am.”

Krystal: Even if you weren’t spoiled, there was no way a villain like this would ever NOT be on the 2-on-1. Get your popcorn ready cuz it’s gonna be a good one next week.

So next week we have Lauren’s first 1-on-1 that I’m sure some of you will dissect every inch of. What’s funny is that when I posted videos and pictures of their date in Paris on the day it was filming, the response I kept getting on Twitter and email was that Arie totally didn’t seem into her. Oops. Moulin Rouge group date, and then the 2-on-1 with Kendall and Krystal which I’m sure will make everyone’s head explode.