-Jacqueline’s date was up next and since the show gave it a whole 10 minutes, there really isn’t any reason for me to care about it if they don’t. The girl has waited all season for a 1-on-1 and it almost felt like a pity date at this point. We barely saw any of it, and their conversation before dinner was just Arie drooling over how hot she looked. So yes, very surface level here. The only interesting part of their date was Jacqueline asking him at dinner, “Why do you think you wouldn’t gravitate towards someone intelligent?” She was asking that rhetorically, right? Because I think the answer is quite obvious. In fact, the answer is almost too easy so lets just hope Jacqueline asked already knowing the answer, and just seeing if Arie would say it. He didn’t. Damn. Would’ve been nice of him to admit his brain has the mental capacity of a pea.

-One thing that Jacqueline did mention to him was the fact that her career in psychology is very important to her and she still has 6 years of schooling left. Translation: If you think for a second I’d give up getting my degree and moving to Arizona for your fickle ass, go kick rocks. Or something like that. Even with all that on the table, Arie still decided to give Jacqueline a rose because, well, I’m not quite sure. I know it’s been a while since they brought 7 people to the episode before hometowns. It’s usually 5 or 6. So to give her a rose only to have her leave the next episode was pretty bizarre. Then again, it’s Jacqueline who I believe ends it next week because she just doesn’t think they’re on the level he is with other girls. Which they aren’t, so maybe she is a smart girl after all. Now, if she heads to Paradise after saying all that stuff last night, all bets are off.

-No cocktail party, we are straight into the rose ceremony. Lauren, Bekah, Kendall, and Jacqueline safe with roses already. 5 girls left, 3 get roses. Arie: “Paris was amazing…beautiful…moved forward…this week has been eye opening…difficult, amazing, city of love…find that here…doesn’t this any easier…although it is easier since no one really knows who Jenna is, and I’m sure mommy Chelsea needs to get home to her kiddo.”

Tia: The potty mouth sailor isn’t going anywhere. You think if she was ever the “Bachelorette,” the censors would just follow her around on every date?
Seinne: I would think she’s a shoe-in for Paradise.

“Ladies, Arie, it’s the final rose tonight. When you’re ready. I slept, golf, and drank in Paris so that’s exactly what I plan on doing in Italy next.”

Becca: I feel like I’m watching Jack on “This is Us” when I see Becca on this show. Like, we know what’s going to eventually end up happening, so watching everything leading up to it is just tragic. And oh yeah, told you he wouldn’t die in the fire.

So next week, the 7 remaining girls go to Italy, and we know that there’s a 3-on-1 date based on what Chris Harrison wrote in his blog, and we know by the end of the episode that Jacqueline, Bekah, and Seinne are eliminated. Based on what I’ve heard since I posted the episode-by-episode spoilers, I think all 3 might be sent home before the rose ceremony, and during their dates. Seinne is sent home on her date, and I think Bekah and Jacqueline are part of that 3-on-1? Not 100% sure, but they’re all gone by the end of the episode and I’m beginning to think there isn’t a rose ceremony. Guess we’ll find out in a week. UPDATE: ABC’s press release has the breakdown of the dates. Becca, Lauren, and Seinne get 1-on-1’s (Seinne gets eliminated on her date), Jacqueline goes to visit him between his date with Becca and Lauren (and eliminates herself), and the 3-on-1 is Tia, Kendall, and Bekah. He eliminates Bekah during this date, so there is no rose ceremony (at least one where someone gets eliminated) this episode once he eliminates Bekah during the 3-on-1.

Now, the biggest takeaway from last night’s episode, was the promo that showed clips for the remainder of the season. In case you weren’t paying attention, in the very last clip, they show Arie on a couch by himself with a voiceover of someone crying. 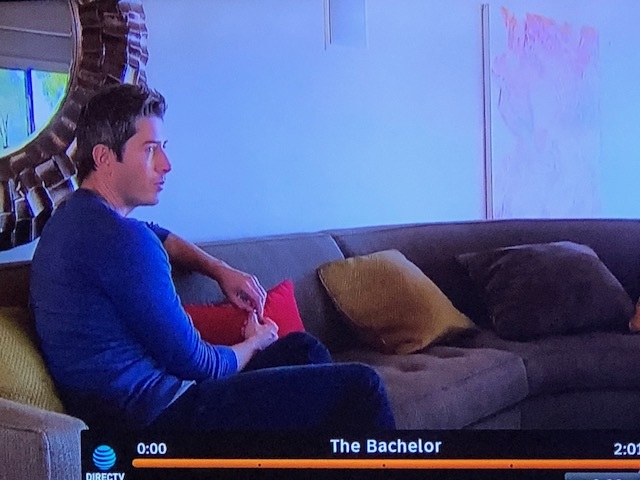 You can kinda tell in that picture, but if you watch it back, Arie is clearly fiddling with a ring in his hand. And since Arie didn’t dump Lauren before the final rose ceremony happened (and he wouldn’t have a ring in his hand anyway if he did), and since there’s no other scene where Arie would be on a couch in regular dress clothes with a ring in his hand, this scene is from the breakup with Becca that was filmed post show. So yeah, any doubts or questions that you may have had that maybe his break up with Becca didn’t happen, or maybe it wasn’t filmed, you can put that to rest now. It happened, Becca obviously was none too thrilled about it, it was filmed, and we will see what he said to her that day, along with whatever he convinced Lauren of at her parents house. Oh by the way, I’ve also learned that since filming ended, Lauren quit her job in Dallas, moved home, and has been living in Virginia. So that explains why Arie went there to talk with her. Again, I’m not sure what he said to convince her that she’s the one for him when two months earlier he proposed to someone else and he hasn’t been able to be with just one girl for like, forever. I only hope she comes to her senses sooner rather than later. This isn’t going to end well.