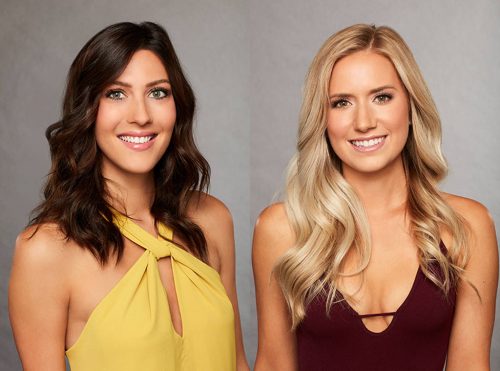 We all know that producers have a huge say in a lot of things you see on this show. We’ve watched UnReal. It’s not that far-fetched. They are pulling the strings and everyone else on the show is just a puppet doing what they tell you to do. And if you don’t, you usually don’t last long. Some know how to play the game better than others. Here’s the thing though: it’s one thing for a producer to manipulate someone in an ITM to maybe talk sh** about someone else, or say something that they know will be a great soundbite. It’s a whole other thing completely for Arie to get manipulated into breaking up with Becca on camera and blindside her during a Happy Couple visit. The girl had had 3-4 visits up to that point, and by the looks of things, they were fine. Yes, Arie had told her he was struggling a bit, but like she said in her interview, did she really expect he’d walk in that day, throw in the towel and just say he changed his mind. Of course not. Why would she? They were ENGAGED. You’d think you’d fight a little bit more for your fiancé. And if your argument is he loved Lauren back in Peru and always wanted her to begin with, then that makes Arie and even bigger asshole for proposing to Becca in the first place. That’s on him, not producers. You’re a grown ass man. Have some balls.

I mean, of ALL the people to change their mind on an engagement after two months, it’s the guy who just happens to be a known womanizer, a known cheater, a guy who carried on a relationship with Sydney probably six months longer than it should’ve lasted, and just proved everything that what was said about him was true. You can change your mind about someone, sure. But when it was predicted from the beginning, and when it completely fits the narrative of what people have said about you for years, doesn’t it kinda become who you are? I sure think so. There wasn’t a more perfect guy to play the role in what we saw happen last night than Arie Luyendyk Jr. It’s almost like his season couldn’t have possibly ended any other way. This is who he is. He cannot be alone, he’s incredibly insecure, he’s incredibly fickle, and unfortunately, Lauren is next on his list. I don’t care if they’re engaged or not. This is nothing against Lauren, but do you honestly think this is the girl he’s going to spend the rest of his life with? This is finally the one he found? Oh sure, in his mind it is. For a few months. Then it’ll be the next new shiny toy that comes rolling into town. Or his DM.

Which brings us to tonight, which I think will be most interesting. The best part is it’s live. No editing can get Arie out of this one. They’ll show the footage for when he went to Virginia to win Lauren back and whatever the hell he said to her family to win them over too. Who knows, but at this point, does it even matter what he said? Look at what he told Becca in Peru three short months ago. Talked about being her forever. Talked about having babies THAT NIGHT. Do you honestly take anything this guy says about anything seriously? You shouldn’t. He’s given you no reason to. And that’s where Lauren is in a hole. I don’t know why she chooses to believe him, although I’m sure she’ll just say she’s following her heart, he’s a great guy, he made a mistake, but he’s been nothing but great to her since blah blah blah. We talked about this on the Possessionista podcast and then again last week. If she wants to take him back, fine. I’m sure plenty of final two girls would take the guy back if he admitted to a mistake. That part isn’t unusual. But when you have the reputation this guy does, and you see how he handled his break up with Becca, and you see everything he said and promised her in Peru, you HAVE to at least think some of him is full of sh**, right? And if you don’t, well, that’s on you. He’s just words. He says things for effect and thinking that’s what they want to hear, but when his actions don’t back it up, what does it matter?

As I told you last week, everything I’ve been told is that Arie & Lauren are engaged. I’m sure that’ll get a rousing ovation from the audience tonight. It’s one thing to take Arie back, tell him you’re willing to work things out, and tell him that you’ll move to Arizona to start a life with him, but it’s a whole other thing to go out and get engaged six weeks after he was engaged to someone else – with that someone else being the person he chose over you in the first place. Now, if for whatever reason these two aren’t engaged and are just dating, while it was still sh***y for him to pull what he did on Becca by ambushing her with cameras, it lightens the pain just a bit if he and Lauren are just dating. I don’t think that’s the case, but, if they’re just dating and she’s moving to Arizona like I’ve been told, then they’re essentially just in the same boat Jason and Molly were in. They dated, they were public enemy #1, but at least they did it right. Molly basically needed Jason to prove to her he was in this for real. Lauren accepting a proposal six weeks after he ended an engagement is just lunacy. There’s zero way for her to defend herself on that. It’s flat out stupid. No way around it. No one will agree with it and she’ll be raked over the coals by the general public, and rightfully so.

Arie’s girls are gonna come after him, we’re gonna see his conversation with Jason that happened after he’d already broken up with Becca and was with Lauren, which is kind of a head scratcher. Molly had this great tweet last night:

Wouldn’t you consider learning from the mistakes of those before you – maybe call and ask what NOT to do…like filming the breakup ??? #TheBachelor ?

Couldn’t have said it better myself. Why did he talk to Jason AFTER he’d already embarrassed Becca by filming their break up? That makes zero sense. Arie has dug his own grave, and now he must lie in it. Everything he’s been getting on social media since last night, and which will continue through tonight, is self inflicted. Not Becca’s, not Chris Harrison’s, not production’s – his. Sure, those people played a part in everything, but they’ve been doing shady sh** for years. This is nothing new to them. Arie could’ve put his foot down and prevented the filming of the break up from happening, and he didn’t. So whatever comes his way is deserved. Becca, while obviously hurt by everything, is so much better off without this guy in her life, it’s not even funny. She’s the winner in all this. She doesn’t have to be engaged to him anymore, and, she gets to be the “Bachelorette,” which we’ll see announced tonight. Arie is Lauren’s problem now. If she thinks she’s gonna finally be the one to change him and have him settle down with, it’s about the most naïve thinking you can come up with. But shhhhh, don’t tell her. Let her figure it out on her own. I wouldn’t want to be them tonight.