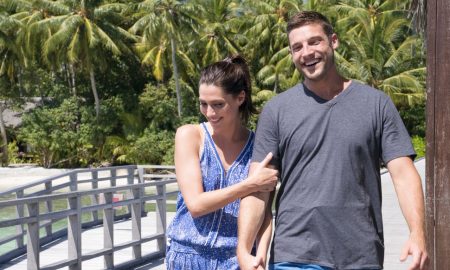 One of the great things about finale night is even though the spoiler has been out there since May, it’s always fun to get confirmation right before the finale airs since the final couple always tapes their Kimmel appearance before heading over to the set of the ATFR. So if you saw my tweets last night about 20 minutes into the show, you knew the confirmation of Becca & Garrett was officially official and that Blake had a bit of a meltdown when he got dumped. I can’t remember a final 2 guy crying like that after getting the heave ho. Man, that was rough to watch. Sometimes we get a few crocodile tears, sometimes we get some bawling in the limo ride being taken away, but that was a full on hysterical, ugly cry. Remember after last week when all the sentiment regarding the next “Bachelor” surrounded Jason after his performance on the MTA? You know whose name I really never heard once last night as next “Bachelor?” Jason. Of course now everyone wants Blake. Every week there’s a new Flavor of the Month. I talk about next “Bachelor” stuff on page 4 of today’s post, but nothing’s changed since last week. It’s really the only secret this show is able to keep anymore.

Our Nell Kalter has her “Floribama Shore” recap now up here for you all to read and get a nice belly laugh in. Check it out, tell your friends, tell your mistresses, and tell as many people as you can. They’ll appreciate it. Also, get your “Reader Emails” and “Dr. Reality Steve” emails in this week. A little low right now for a finale week, but you’ve got plenty of time to send those over. Get on it people. America needs you.

Tonight is the premiere of “Bachelor in Paradise.” 2 hrs tonight, then starting next week, every Monday and Tuesday for 2 hrs each night for the next 6 weeks. I know you’re waiting for episode-by-episode spoilers and I don’t think I’m gonna have them this season. Once I got the ending of the season spoilers, I honestly haven’t put a ton of effort into finding out more. I’ll try this week but I don’t think I’ll be able to nail down every date and elimination and when they occurred because it’s kind of a jumbled mess. Maybe it’ll be easier to do right before each episode, I’m not sure. Anyway, I do have an update that I’ve added to the end of the season spoilers. Chris and Krystal did get engaged on Paradise. That brings our total amount of engaged couples this season to three: Ashley & Jared, Jordan and Jenna, and Chris and Krystal. Yippee. I will keep you updated throughout the season on anything I hear, but your main stuff is all in the season ending spoilers.

Episode 3 of the “He Said, She Said” podcast with myself and Ashley Spivey is now up. You can listen to it on a number of platforms, but you can also tune in by clicking the player below:

(Episode 3): Ashley and I first begin discussing how families with children deal with in-laws. Then Chandra from Canada comes on to discuss her boyfriend of 3 years, her issues with wanting children, but why he hasn’t pulled the trigger yet on an engagement (7:34). Then Blair in Seattle talks about the guy she’s been dating for a few months who cheated on her and she doesn’t know what to do now (41:24). Original theme music provided by Kate Bass and the song is titled “Blink.”

If you want to be a part of the podcast in the future, all you need is access to Skype. Email myself or Ashley, tell us what you’re looking to talk about, let us know what time zone you’re in, and we’ll coordinate from there and get you on a future episode.

Speaking of podcasts, this week’s is with former “Bachelor,” Sean Lowe. It’s been a long time coming, and honestly I don’t know why it even took this long. I guess I always figured Sean was somebody I could go to at any point. But his partners in this new venture he has approached me a couple weeks ago and asked if I’d be interested in having him on. I guess that was the kick in the ass I needed. Sean has teamed up with some investors and launched the Vouch dating app nationwide this week. Basically, it’s a dating app where your most trusted friends (Vouchers) get involved in the screening process to help you find your match. Pretty funny launch video they created:

So we’ll be discussing this, how it came about, what got him excited about this project, etc. all while talking about his career in Bachelor Nation and other shows. I have a feeling I could probably talk to Sean for 3 hours with everything he did before, during, and after the show. A lot to cover there. But they guy does have two kids now, so I can’t keep him too long. Looking forward to this one.