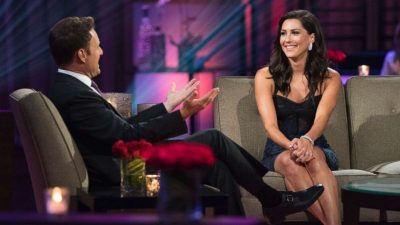 One thing that I tweeted about over the weekend was the fact that final casting weekend for the “Bachelor” was happening. Even though they use the word “final,” it happens over the course of a couple weekends, so this weekend it’s happening as well. Inevitably this will lead to questions of, “How is it final casting weekend if they’re still doing open casting calls? Do those people even have a chance?” My short answer would be, probably not. But when it comes to this franchise, there’s instances where something isn’t black and white. We know (based on some of my former podcast guests) that they were late adds to the cast. Not everyone who makes it on the season is at one of the final two casting weekends in LA. Some people they want on so badly they just push through the process and as long as they pass medical and can get everything in order, and the show wants them bad enough, they’ll get cast. We’ve heard some of them on my podcast during the course of the last year and a half. I mean, I don’t want to burst people’s bubble, just know what your odds are if you’re going to an open casting call. Not good.

Yes, there were open auditions this past weekend in a couple cities. Could someone who showed up at one of those get cast on next season’s “Bachelor?” It’s possible – but not likely. By going to an open casting call, it basically just means you’re in their system, and they can contact you at any point and ask if you want to be on a future season. So not all is lost by going to one. But hearing so many contestants who weren’t cast through an open casting call, just know going in that if that’s how you applied, your chances are very slim of getting cast. They have recruiters year round looking for people to come on this show. They’re talking to agencies, they’re scouting out and about, they’re taking submissions from modeling companies, etc. And when they’re the ones casting and looking, usually those people have a better chance of getting on, since the people who show up to open casting calls aren’t people they ever went after personally. So just keep your expectation level low if you go to one of those then you won’t be disappointed when you likely don’t get cast. But hey, you get a nice “Bachelor” tote bag and some free pens out of it if you do go to one, sooooooo, score?

Our Nell Kalter has her “Floribama Shore” recap now up here. Even if you don’t watch the show, I suggest you read it. It might even lead you to wanting to watch the show, regardless of how back asswards that cast is. Holy moly. Also, get your “Reader Emails” and “Dr. Reality Steve” emails in for this week. I’m sure you have a lot of thoughts as we approach the finale next week. Not to mention, a ton of reaction to the Holly podcast from last week. The emails I posted yesterday were ones sent to her. Tomorrow there will be a few you guys sent to me. Can’t remember a podcast that generated that much positive response from the readers. Good to see.

Kind of disheartening to see this Becca interview with Glamour Magazine talking about the guys on her season. I understand Becca doesn’t want to rock the boat, and I get that she doesn’t want to sound ungrateful, but I don’t think anyone would’ve taken it that way if she would’ve at least said something, ANYTHING in regards to the Lincoln situation. Her response about Lincoln saying “He always treated me with respect. So yeah…” is about as tone deaf an answer as I’ve ever heard someone give. So because he didn’t grope/harass you, that means he must be a good guy? I don’t get what Becca was trying to accomplish with that answer, but that really was a sh***y answer to give.

Becca, you’re allowed to say what you did, but to not follow it with some sort of, “However, I was appalled by the recent Lincoln reports. I hated to hear something like that and I’m glad he wasn’t at the Men Tell All,” is perfectly acceptable. What’s wrong with saying that? Hell, Chris Harrison basically did in this interview. Not a good look for Becca on that one. “I still think those guys are amazing.” That’s great. But Lincoln isn’t, and it would’ve been ok for you to say as such. Lumping him in with “those guys” didn’t call him out at all. She should’ve. You don’t need to give a full speech on it. You don’t need to give him more time than he deserves. But acknowledging what the guy did and that he’s NOT part of your great group of guys would’ve done you a little good.