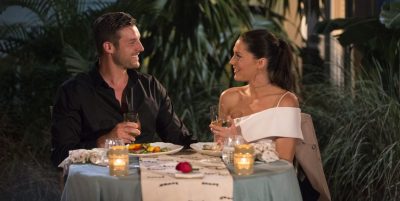 A few things to get to today before we begin our shorter recap of last night’s Overnight Dates episode. Next “Bachelor” talk, Bad Chad is in the news, the hack editing job they did to fool the audience, and Des & Chris on “Celebrity Marriage Boot Camp.” I’m recording this week’s podcast today. I will tweet out later once we’re done who it is, but needless to say, there’s going to be some tea spilled this week I’m pretty sure. This is someone who has been mentioned on this site before, was in the news recently, and someone who wasn’t a big fan of mine in 2017. However, things change and, well, they will be on the podcast this week. Looking forward to getting the full story of their “experience.” All too familiar story. Don’t worry, you’ll have your answer later on today when I tweet it out. I just wanna make sure it’s in the can before I tell you who it is. We’ve already had to reschedule once due to scheduling conflicts. But we should be good to go today and it’ll be out this Thursday. So get your popcorn ready.

Our Nell Kalter has her “Floribama Shore” recap now up for your reading pleasure. Check it out. Once again, it’s one of the shows that even if you’re not watching, you will still get a kick out of her writing. Get your “Reader Emails” & “Dr. Reality Steve” emails in for this week. As of now, we’re running a tad low on both of them, so lets ramp those up.

One thing I’m sure even more of you will ask this week in some form or fashion is, “Who is the next Bachelor?” We’re still about 5 weeks out from that announcement and lets face it, none of us know. I’m not going to pretend I know where they’re leaning because what exactly does “leaning” mean? All the guys in Becca’s top 4 not named Garrett are in the running. Of course after last night, most people think it’s Jason. After last week, they thought it’d be Colton. And in two weeks, they’ll think it’s Blake. That’s how it works with the audience. The guy who’s most fresh in their head off his break up is the one most talk about as the next “Bachelor.” It certainly could be one of those guys. Or they could do what they did the last two seasons and pull a random old from a past season like Nick and Arie. I will say this til I’m blue in the face: Ben Higgins and Peter Kraus will ALWAYS be a possibility. I don’t care what Ben says in interviews, if they were 100% sold on having him do it again and offered it to him, he’d absolutely do it again. Peter I think is a much longer shot, but, just to appease the Peter crazies, I guess he’s someone they could go to at some point. The announcement won’t come until we get closer to the end of Paradise, so I’d say in a month or so. Until then, all we can do is wait.

One of the biggest editing fool jobs this season was done last night during the Jason elimination. At the beginning of the season after the first episode when they run the preview for the rest of the season, this is what they showed. I have it cued up to the point from last night when Becca is crying on the bed:

So in that season preview, she says “He literally just did what Arie did to me.” I remember getting bombarded with questions after week 1 wondering what that was all about. I didn’t know at the time, but on stuff in the season preview, you can never take what they show as honest. They’ll always have stuff in there that either:

And we got our answer last night, since we saw Becca never said “He literally just did what Arie did to me.” She said, “I literally just did what Arie did to me.” Kinda changes the whole narrative, doesn’t it? This happens every season. And every season after that first season preview airs, inevitably I will get asked questions about something they saw that might not have been in the spoilers, or something that didn’t make sense. And it’s impossible to answer because I know how spliced up those season previews are to make things more dramatic than they really are. Just keep that in mind for next “Bachelor” season. Or ANY season preview for that matter because they will screw with you. It’s happened time and time again.

Well this sure was an interesting story. Did you see last week where Bad Chad is suing a movie producer for a bunch of things, one of them being sexual harassment? That’s rich, Chad. Anyway, I don’t know the story, but based on what’s in that article, I don’t see where the “assault and battery” part comes in. Nothing in that story anywhere says this female producer was involved in any sort of assault and battery. Unfortunately Chad, I hope you’re not thinking you’re going to get the $11 million you’re looking for in this one. I’d be surprised if he saw $11 of that. A Hollywood producer promised someone a role then didn’t give it to them? No way! That never happens in Hollywood!

News came out late last week that Desiree and Chris are on the upcoming season of “Celebrity Marriage Boot Camp.” That was news to me but can’t say I’m surprised. That makes them now the 7th couple from this franchise that have gone on the show. Some have been married couples, some haven’t. However, what people are freaking out over is what they saw in the clip. I have it cued up close to the point where Desiree says something that has everyone up in arms:

The “I settled for Chris” line is clearly some creative editing. I haven’t seen the show obviously since it doesn’t air til September, but knowing how editing is done in season previews (as evidenced by how they did it with Becca on last night’s crying scene), I’m pretty sure Desiree is telling the person sitting next to her, “They were saying I settled for Chris,” (or something to that effect), but we only got the last half of the sentence in the clip. Not far fetched to think that’s how that goes. And considering the fact Des & Chris just announced they’re pregnant with baby #2 last week (kinda like how Ashley & JP got pregnant right around the time they filmed CMBC), obviously things are fine in their marriage.