Well, you’re gonna get almost 2 hours of me talking to Sean Lowe on tomorrow’s podcast. There is so much to cover with him since he’s had a pretty extensive career on the show. But even his career post-show has a lot to get into. I tried to get to everything I could, but it’s definitely not like past interviews with former contestants. If I would’ve sat there and run down every date from every season, just from him on the “Bachelorette” and being the “Bachelor” could’ve easily been two hours alone. I tried to touch on the biggest things and talking points from each season. Probably left some stuff out and/or forgot things, but hey, he’s got two little boys under two years old so I couldn’t keep him away from Catherine THAT long or she might’ve gone crazy. What I do know is Sean was very well spoken and open about everything I asked. He’s far enough removed from the show now where the only thing he’d really ever do with the franchise is an appearance or an update with them. So coming on the podcast isn’t going to be some major ordeal. He’s done enough interviews at this point (and even written a book) to where this show isn’t going to scream him down for something he says. Looking forward to you all hearing it tomorrow.

There’s an update on the Leo situation, as early this morning, TMZ has a story that a woman has filed a complaint to Universal Studios (his employer) in regards to sexual harassment at the workplace. Now I don’t know who exactly did it, but considering this woman posted these on Saturday, could it possibly have been her? 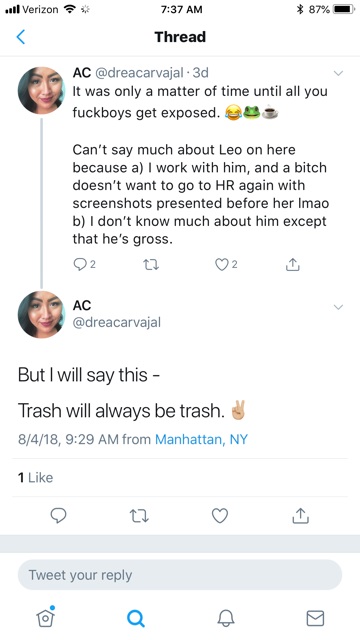 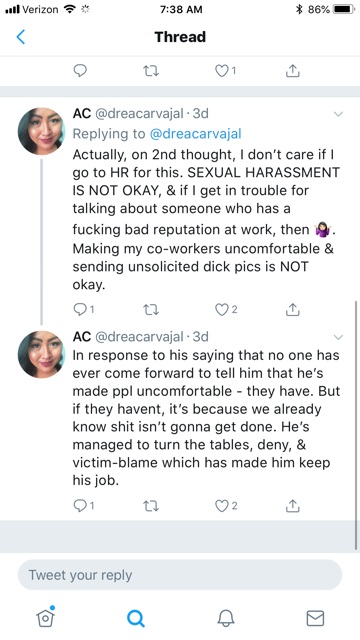 I mean, the timing is awfully coincidental. She specifically mentions she works with him and is another in a long line of women who’ve said he’s done this. Although, if a complaint was filed on Friday, would this woman really announce she did it the day after? I don’t know. This woman posted those tweets after Leo’s “statement” on Friday, so it’s clear she was a bit unnerved about it. I’m sure this won’t be the end of the story. Hey, maybe Leo will give us another statement to laugh at to combat this complaint filed against him?

One thing that I will always do is own up to a mistake I made. I’ve been pretty critical of Colton this season, especially with his inability to keep his stories straight with Tia. Those were further brought to light last night during the Paradise premiere. The thing is, his cover ups are now becoming worse than the lies. Why not just say you saw Tia more than once? No one will think any less of you. But the second we hear you say you only saw her once, but then realize that’s a lie, that immediately comes across shady and that you’re trying to hide something. And if your response is (which I’ve been sent), “Maybe Colton didn’t realize Arie’s season had started airing when he was with Tia in January.” Impossible. I’m honestly supposed to believe that these two spent a weekend together in January, Arie’s season was 4 episodes into it’s run (Jan 1st, 8th, 15th, and 22nd had aired) by the time these two had their weekend, and not ONE time in conversation over a weekend did they ever talk about Arie’s season that was currently airing, which Tia was on? C’mon. However, that’s not what I’m talking about here.

A few days before the MTA, I reported that during the MTA taping, Colton called Jean Blanc a pussy, for which Jean Blanc responded, “Why are you calling me a pussy if you’ve never been in one?” We saw the MTA play out last Monday, both Colton and Jean Blanc were bleeped out, and I doubled down the next day essentially saying that why would Jean Blanc say that to Colton if Colton never called him that. Well, on Robert Mills radio show last week, he played the unedited version of what we saw on TV with no bleeps. Here’s how the conversation went (it starts at the 20:01 mark):

That audio that was released last week was exactly what we saw on TV, except the cursing wasn’t bleeped out. I listened to the audio. I still have last Monday’s episode on my DVR. If you play them in sync (or even separately) you can hear there’s no editing being done. That was the conversation. It’s the same exact audio. TV has the words bleeped out, the audio version doesn’t. Colton never called Jean Blanc a pussy. He said sh*t. He told him to shut the f**k up. But he never called him a pussy in that sequence, which is what I originally reported.

The other thing that was reported to me was what Jean Blanc said to Colton in return, and I think that’s why sources thought Colton said it first. They originally told me he said,

“Why are you calling me a pussy if you’ve never been in one?”

When what he actually said was,

“Colton, you acting like a pussy but you’ve never been inside one…”

Amazing how one word changes the whole context. Maybe Jean Blanc thought Colton called him that in the moment because it was loud and guys were speaking over each other, but he didn’t. It’s clear as day in the unedited audio.

Here’s the thing. I get why Jean Blanc lashed out. Would I have done it if I were him? No. But look at the situation from the outside: already with an edit from the season that didn’t make him look great, he comes on the MTA, Colton is beloved by fans, some guys are still clowning him up on stage, Colton tells him to shut the f**k up on national television which was immediately followed by the audience cheering and laughing, then says he’s gonna change his mind in three seconds and the audience eats that up too – so yeah if I were him, I would’ve felt like everyone was against me at that point. And he lashed out. What he said was the wrong choice of words, but I can tell he probably felt pretty ganged up on in that moment. Anyone would. You already had most of America not thrilled with your exit on Becca’s season, Colton is obviously well liked, and basically the whole audience there is siding with Colton. So I get why Jean Blanc went on the attack. He just had the wrong choice of words since Colton’s virginity has nothing to do with that particular argument.

So my apologies to Colton for putting it out there that he called Jean Blanc a pussy. Going by the unedited audio, he clearly didn’t.