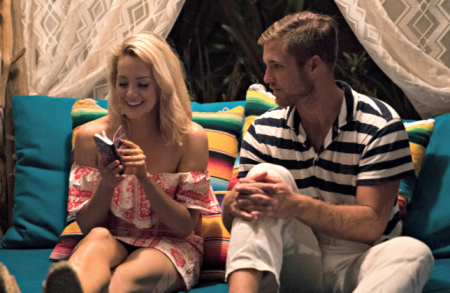 A lot of today’s “Reader Emails” are stuff that came down late last week or in the last two days. Most isn’t Jordan/Jenna related, and that topic is gonna rule Bachelor Nation for the next week or so. This is the final “Reader Emails” of the calendar year, since starting next week, the “Bachelor” will begin filming, I’ll be doing “Daily Links” as much as I can, along with spoiling Colton’s season in real time. It’s a been a fun ride this year to say the least.

Are contestants compensated in any way to act a certain way, even if it makes them look bad, like the way Leo excited bachelor in paradise? Cause I found that to be so staged, also noticed that the guys from Becca’s season who did not get along, were quite chummy during “paradise”. On another note, as long as they are on US soil, whenever they wanna plug a band, it has to be country music, WHY? Is there no other genre that is deemed romantic for a date? Please bring more contestants on your podcast from early seasons, I really enjoyed Meredith and Trish, thx!

Comment: They’re compensated for coming on BIP, not “Bachelor” or “Bachelorette.”

I just finished UnReal a couple weeks ago and I really enjoyed the first couple of seasons. I only started watching it because of your podcast with Shiri Appleby. Anyways, I’m glad I did.

I’m currently listening to the newest episode with Kat and I can’t help but think of that blonde contestant from UnReal’s first season with the eating disorder where when her father passed away and production didn’t tell her and when they did they filmed it. Of course it is shown on a much more dramatic scale. But listening to Kat’s story made me wonder if Shapiro used Kat as a muse for that character.

Really enjoyed listening to this one. Kat seems like a really smart down to earth girl. I enjoyed her being honest and upfront about a lot of behind the scenes. Very refreshing!

Comment: It’s an interesting correlation you made, however, Shapiro was long gone from the franchise by the time Juan Pablo’s season rolled around.

Did you hear anything about why Jubilee really left? It seemed like such a weird exit with it being done in a flashback and no interview with her or John. Then this week John made the comment like he didn’t know people could leave whenever they wanted. Just wondering why it was never really talked about when someone leaving outside of a rose ceremony is usually a big plot point.

Hi Steve! Just wondering what the chances are as Tia going to help Colton out

or be involved in a group date

What percentage of women, do you think drop out of the running of being a contestant in the Bachelor once they realize who they’re competing for isn’t who they wanted? (Ex. a woman who signed up to be a contestant for Blake, realizes Colton is the bachelor..)

Comment: Impossible to throw a number at that. I really have no idea. My guess is very few. Just like casting doesn’t care about finding the 25 most perfect contestants for the lead, the contestants themselves don’t care either. They just want to be on TV, be part of the family, and see where it takes them.
________________________________

Reality Steve: 3 seasons of Colton would be overkill. Can’t see him as the Bachelor.

Producers: WE HAVE TO PICK COLTON. REALITY STEVE WILL NEVER FIGURE IT OUT.

Hahahaaaa joke’s on them. Well done Steve. Thanks for the Bach spoiler well ahead of GMA!

Not super stoked with the choice, but he’s not so different from Chris Soules with his inarticulateness and apparently poor understanding of females. Can’t wait to see the ‘crazy’ contestants and tantrums they throw his way (i.e. the usual producer tricks) and whatever drama they’ll fabricate around the fantasy suites.

Wish this wasn’t goodbye for the year Steve, but I look forward to the upcoming spoilers. When will you drop some of the new cast of women?

Hey Steve, I hope this isn’t too late for Reader Emails,

1) Who do you think in recent bachelor years has been Truly genuine? I’d have to think about that one.

2) After the show is over do the contestants with fame return to their day jobs? If they even have a job anymore. Some do, some don’t.

3) Is there any contestants on Coltons season that you think will create drama, or are famous? You’ll have to wait til next week.

4) Do you believe in Chris and Krystal, Jenna and Jordan, Astrid and Kevin, or Kendall and Joe will last the longest? Hmmmmm, I’ll go with Jordan and Jenna. Ha ha. Kidding. Chris and Krystal?

5) Do you think Tia will be the whole conversation on Coltons season? I sure hope not.

6) Last but not least, When do Kamil and Annaliese end it?

First want to say I love your spoilers, been watching and following for years!

My question is pertaining to Colton. I’m curious your opinion. I have theorized that Colton went on BIP to be the Bachelor. Sounds contrary to what most say every season (that if they’re on BIP they most likely won’t be the Bachelor), but I feel like if he didn’t go on and explore/close the door of the Tia/Colton situation that he would’ve never had a chance at becoming the Bachelor. It’s like he gave the relationship just long enough to be relevant, but not long enough to make it seem proposal serious. It’s like it was prompted for his journey to becoming the Bachelor. What are your thoughts?

the reason everyone is so upset is because they (myself included) dont understand WHY it wasnt jason or blake??!?! like did they both say no ???
we got nick as the bachelor because we found out the original pick luke was shady. we got arie as the bachelor because the original (well popular) pick peter didnt want to do it. but we get colton (who was def third on the list) because……….??
if you could dig for answers or at least if you HEAR something as to why jason and blake were passed over can you please share it with us? it would be much appreciated! im so bummed 🙁
thanks

I know you already posted reader emails this week but I want to ask this because it’s been bothering me.

I follow Raven, Rachel, Tia, Becca on Instagram, and they are literally always on vacation. Did these people quit their jobs and now just live off of paid social posts? Every person is different. There’s no universal answer. For those four, Tia definitely works. She’s in her work outfit a lot on her IG stories. Rachel just got a job with ESPN. Becca is still basking in the post show media tour, so, I don’t really know if she’s getting back into PR or not. I’ll guess she isn’t. Raven just recently moved to Dallas and is still running her Shop Grey Suede shop since she’s constantly posting about it.

I mean, I have a normal full time job at a law firm and only have two weeks of vacation a year. Which is pretty standard. How are these people perpetually on vacation? You’d have to ask their employers.

And then another point for people like Tia who not only don’t work but their bio is “dog mom!” You were in Mexico, then Nashville, Boston, Disneyland, LA. Where is your dog / does it have a new mom now? I don’t know about you but I have to feed my dog and walk him 4 times a day every day. On top of the fact that I actually want to be with him.

Totally admit I’m jealous. But also I actually don’t get it.

Thank you for your detailed and entertaining recaps of all the shows. Your level headed perspective that is refreshing among the over-dramatized Bachelor Nation shows. I do not know why I keep watching these krazy shows, but your insight makes it far more entertaining. Thank you and please keep doing what you are doing, and you do it well – recapping, spoiling, and your podcats are great too!

A couple of comments – first regarding Colton. IMO, Colton is a perfect, safe, nice looking, clean cut Bachelor candidate for many reasons. Colton’s problem: OVEREXPOSURE. We were already tired of Colton from the first episode of BIP, with the whole Colton/Tia thing. And they monopolized BIP until they split. Good luck Colton!

Second comment — funny to see these BIP folks, crying, crying……. Are they crying for the loss of love and “what could have been” in a romantic sense, or are they crying over the loss of their Instagram fame and fortune that they will miss because they did not couple up?? No need to comment, I am just sayin’.

Question for you – is Grocery Store Joe perhaps the only person in this round of BIP that did not actively seek out getting into Bachelor Nation? I read that he was approached when he was shopping in another store (he was not in his store). Joe is so likeable, he seems to be the most down to earth, non-fame guy of the bunch. And now he is going on to DWTS, bravo Joe!

Comment: It certainly didn’t seem like he did. Dude has hit the jackpot since getting eliminated. It’s crazy.