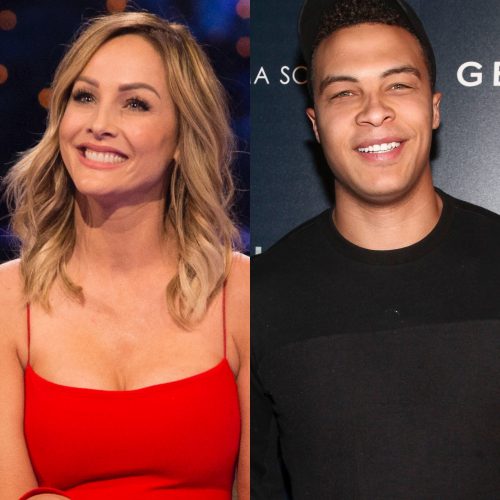 -Lets get to Zach’s date, otherwise known as “Problematic Male Behavior #2.” Let’s make one thing perfectly clear for those who maybe don’t know this. Anytime someone gets eliminated on a 1-on-1 date, production already knows. Zach was getting sent home before this date ever started. Ask any past lead who sent home someone on a 1-on-1 and if they’re being honest, they will tell you that’s how it works. Production already knows who you want to keep and who you want to send home before any date. The whole reason Zach was put on this date was so she could send him home bc that’s what she wanted to do. It’s not like Clare, or any lead for that matter, goes on a 1-on-1 and a decision is made during the date. Zach was gone no matter what he did on that date, so keep that in mind when you think about this date.

-I don’t think you need to be talking during a massage as much as Zach was. Not a horrible offense, but, you don’t need to be talking a mile a minute during one of the most relaxing things you can be doing. Be quiet. Not like it ultimately mattered because his fate was already sealed before this date began, but still. Hey, I’ll cut him some slack and say maybe he had an erection during it and was doing whatever he could to distract from it. I guess it’s possible, but speaking personally, that’s a myth. That’s never even come close to happening to me during a massage and I’ve gotten plenty massages in my lifetime. I basically make an appointment for one every time I go to Vegas. Not once has it happened. I’m way too relaxed to get worked up like that. Where was I?

-Now lets get to the portion of the date where things went completely sideways and that was in the pool. The whole kiss scene was so confusing to me. Clare clearly wasn’t into Zach. That was perfectly clear. At least it was to me. But then she initiated the kiss, he either didn’t reach far enough to reciprocate, or maybe he didn’t want to, I don’t know. But from that point forward, things took a turn for the worse. She seemed a bit turned off by him not reciprocating her kiss, if not pissed he seemingly rejected her. To me, Clare misread the situation. I think she took that totally the wrong way and he wasn’t being malicious or intentional in the least bit by not kissing back. But I can’t explain it. Their wires definitely got crossed and maybe Zach will say something on social media about it (Uh oh, he did. And it did him no favors). The whole thing was just awkward and if I had to guess, Clare made that miss-kiss out to be worse than it was. HOWEVER…

-I can’t put myself in Zach’s head. I can’t speak for the guy. I can only speak on what was shown, what we saw in that scene and Clare’s subsequent ITM where she said his aggressive behavior triggered her. Zach may have thought Clare overreacted. Zach may have thought Clare misread the situation. Zach may have looked forward to kissing Clare since the second he arrived, finally got his chance, and was bummed out when things went sideways. So when Clare essentially lets it be known that his actions weren’t what she expected and got up to get out of the water, at NO POINT was putting his hands on her, especially around her neck area, the least bit acceptable. TWICE. This isn’t even debatable. Sorry. This is a woman who has said this season and in interviews that she’s been in a physical abusive relationship in the past.

-We know you were trying to let her know you didn’t pull away Zach. We could clearly see that. You wanted to prove you liked her when she thought you didn’t. Absolutely, 100% get that. But you didn’t need to use your hands in her neck area, TWICE, to do it. There’s no defending that. At all. I think you can absolutely make the argument Clare might’ve misread/overreacted to the way the miss-kiss went down, but that doesn’t justify his actions. How can it? There was a ton of positive response to this on Twitter by Ashley Spivey, Emma Gray, and numerous others responding to my tweets. However, as I predicted in yesterday’s column, there was some absolutely trashy responses. And no, it’s not trashy because it didn’t agree with my opinion, it’s because you’re basically saying it’s ok for a man to put his hands on a woman that way, and in no scenario is that ok. None. These are what some of the people defending it were saying. Gross.

And here they come… pic.twitter.com/AgJmJU5jy6

And then, well, Zach responded to my tweet. Ugh. I’ve embedded the tweet AND taken a screen shot just in case he’s deleted this awful take by the morning. 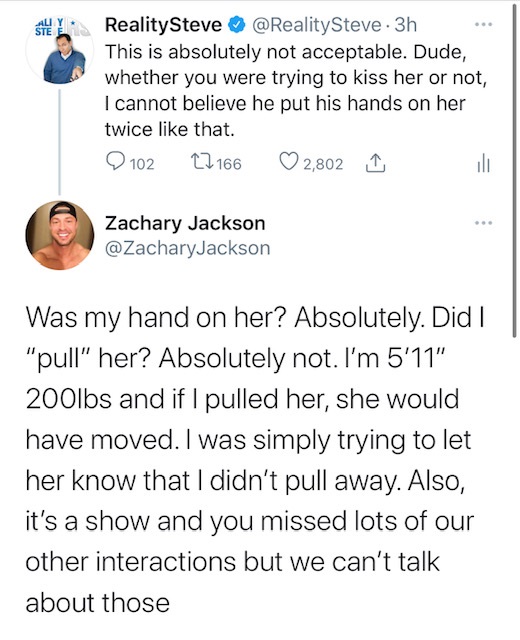 Was my hand on her? Absolutely. Did I “pull” her? Absolutely not. I’m 5’11” 200lbs and if I pulled her, she would have moved. I was simply trying to let her know that I didn’t pull away. Also, it’s a show and you missed lots of our other interactions but we can’t talk about those

Man, for such a short tweet, there are so many things wrong with what he said. But lets go over them, shall we?

1) He’s responding to my tweet and says “Did I pull her? No.” At no point in my tweet did I ever use the word “pull.” So why is he saying that?

2) “I was simply trying to let her know that I didn’t pull away.” Again, as I just said, we know what your intentions were and what “point” you were trying to make. It’s the way you went about it that was absolutely wrong and you should know to NEVER put your hands on a woman like that. TWICE. She clearly was walking away from you both times. Take the L, let it go, meet up later for dinner and use your words to tell her you’re sorry about how the kiss went, sorry for the confusion, you’re into her, and apologize.

3) “Missed a lot of our interactions.” Your previous interactions that you’re claiming weren’t shown have absolutely nothing to do with my tweet and saying you never put your hands on a woman like you did. Unless in a clip that we never saw earlier in the date Clare told you, “I’d love for you to put your hands on me in an aggressive manner as I’m walking away twice,” you’re in the wrong. Own it.

5) The fact there are people defending him under his tweet is depressing and makes me sick. They think it’s OK what he did because SHE initiated the kiss. SMH. How about this? She was wrong for initiating a kiss on someone she ultimately wasn’t into, and he was dead wrong for putting his hands on her twice when she was clearly put off by it? Why is that so hard to say?

I don’t know Zach. I’m not calling him an abuser or anything like that. Neither did Clare. Nobody’s canceling Zach. Yet people are now claiming Clare has ruined this guy. No she hasn’t. She said what he did triggered her. It’s her experience. Who are you to tell a woman who’s been previously physically abused in a relationship how she’s supposed to feel? Good Lord. All we’re doing is telling him his behavior was unacceptable and to never do it again. I have no idea what this guy has been like in past relationships. Maybe this was a one off thing. We can’t say either way unless an ex comes forward with a similar story. Regardless if you felt there was a miscommunication about the kiss, which it certainly seemed like there was, the second she was walking away, his hands shouldn’t have touched her. He crossed her line, and that’s all that matters. You’re really gonna sit here and debate signals Clare was giving him made his actions acceptable? Are you kidding me? If you’re arguing Clare’s signals she gave him, then you’re basically also in the camp of, “Well, the woman dressed sexy so she was asking for it.” Holy crap I can’t believe some of the responses I’m seeing. You know, like this one:

I don’t think Zach’s intentions were malicious, nor do I think he meant to be aggressive. But his intention and his actions are two completely separate things in this instance. I’m not debating his intention. We know what he was trying and wanted to do. He just went about it in the worst way possible. Here’s the thing: that date happened in July. It played out on TV last night almost 3 months later. And yet, Zach came with THAT tweet as his defense? That’s actually making him look worse because he still doesn’t see anything wrong in his actions. I don’t see why he can’t just say something like, “After watching it back last night, while my intentions were pure, the way I handled the situation wasn’t. I never should’ve put my hands on Clare in any matter and I see now how that wasn’t the appropriate response. I apologize to Clare for making her feel that way and I wish I never did that.” Or something to that effect. Hell, even if he says that now, while I guess it’s better than nothing, it’s almost still too late because he already sent that tweet out last night as his first response, so we know how he really feels. Just a sad situation all around and another black eye for this franchise unfortunately.