Still plenty of stuff to get to before we start in on my thoughts from last night. Man, talk about not being able to read the room. Did you see this story from US Weekly regarding Colton’s extra chapter in his new book? I mean, we knew this was all coming, and part of the reason he did my podcast this summer along with a few others, but after the stalking allegations happened, and the subsequent retraining order that was filed, then settled out of court, is this story really necessary to give attention to? I mean, read that thing. It summarizes 5 points from the extra chapter that’s added, then in the very last paragraph in the story, just casually throws in there the story about the stalking and restraining order. Look, I know there’s a relationship there between US Weekly and Colton, but this is completely unnecessary. Promoting the guys book and recapping its contents but then just throwing in a paragraph at the end of, “And oh yeah, there was this little thing this summer where he stalked her and she filed a restraining order against him, but it’s all good they settled out of court” is supposed to suffice? Brutal.

Last week in this recap I told you about all the emails I’d gotten since the cast was announced in October about Sarah and that she had a boyfriend pre-show, had traveled to Mexico with him in August, was seen with him a week before leaving for filming, and that reports were she’s been right back with him since she got home from filming. Well, here’s the guy and a story that pretty much echoes exactly what I told you last week. She’s allowed to date whoever she wants, since clearly she didn’t end up with Matt, but, it really calls out how sincere she really was about this process when this seemed like a plan thing for her to do from the moment she left. The amount of emails I’ve gotten pre and post show, the pictures and videos from this – the optics aren’t great at all, and the story is pretty believable? Why? Because she wouldn’t be the first contestant to ever do this and she won’t be the last. My opinion based on everything I was told was that this was her plan from the very beginning, DJ boy was in on it as well, knew she was going on the show, didn’t care, and knew she’d come back to him once she was done. Everything else on the show she cried over was just window dressing to me. Her plan was to go on, get her name out there, build her brand, then leave. I didn’t buy anything else she said or did on the show.

As mentioned in my podcast last Thursday, Matt’s former roommate of one year, Sophia, appeared on the “Stay at Home Pop” podcast last week to tell stories of when they used to live together. Interesting stuff to say the least. If you haven’t listened, you can download that episode or listen here:

Certainly doesn’t put him in the greatest of light and makes it really hard to believe this guy is ready to be out of the bro down, frat boy lifestyle. Shit, all you need to do is watch his stories even post filming to see that. How can he successfully have a relationship with Tyler Cameron attached to his hip?

Then yesterday, a clip of Matt golfing with his buddies made the rounds where one of his friends commented on Victoria’s body and the rest of the guys had a good laugh at her expense:

Instead of publicly coming out and issuing an apology, Matt doubled down and start blocking people calling him out and leaving negative comments. As of this post, he’s yet to address this video. Victoria deserves criticism for her actions on the show this season, but this behavior is just feeding into his bro down, frat boy behavior that precedes him. Not a good look at all. If he doesn’t apologize for this, it’s a horrible look.

Victoria is well aware of that Matt video because she made sure to take to IG last night and talk about her body. She initially posted a pic with a caption of “Tell me again, how my body doesn’t look so good?” But then some fans got to her and informed her she MAY be showing a little too much from the waist down, so she deleted the original post, posted a new one, cropped the picture so it’s only from her waist up, and then re-captioned with “Y’all are too much.” I was able to capture both pics: 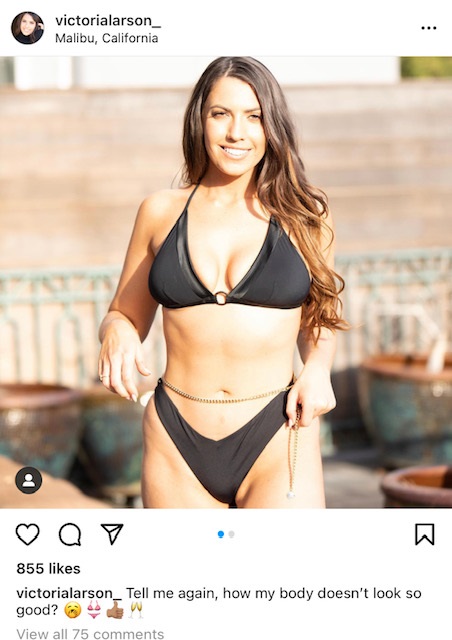 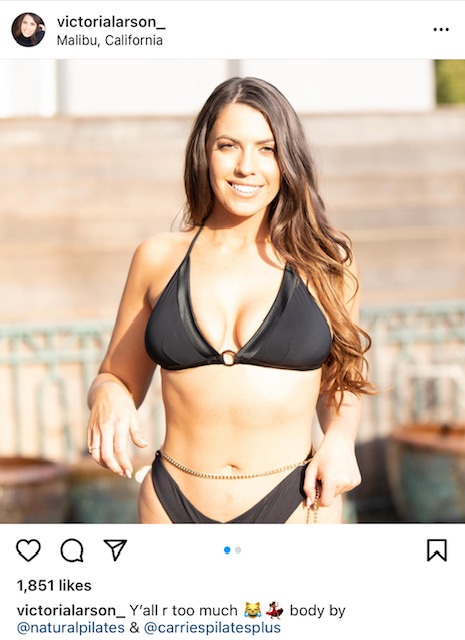 Speaking of Victoria, in case you missed it over the weekend, a report came out about her arrest back in 2012 at a local Publix store snatching make up and other things. This mug shot has basically been plastered everywhere. We see shit like this all the time pop up on contestants in their past. It’s more funny than anything honestly. This was 9 years ago, she was in her teens, this is not a major story at the current time. It’s more of just something to throw on the hot mess express that is Victoria this season. Like, if something like this came out about, I don’t know, Katie or Bri, or Serena P, I think people would be more taken aback. Like, is anyone really all that surprised based on what we’ve seen of Victoria this season that she did this in her past? Me neither.

My thoughts on last night begin on Page 3…