So I decided to do something this weekend that I hadn’t done before. I jumped on the latest IG trend, and did a “True or False” questionnaire that, well, went way longer than I thought. A few observations I had from it. Either people weren’t aware that Kat and I broke up, or maybe they just wanted to hear more details, but I’d say 1/3 of the True/False questions sent in had to do with Kat. Easily. Secondly, I should’ve saved Saturday’s Q&A in my Highlights section, but I forgot. But everything I answered on Sunday is saved in my Highlights on IG. So if you missed it and want to catch up, there you go. Unfortunately, Saturday’s Q & A was mostly Bachelor related questions, and those were the ones I forgot to add to my Highlights. But hey, if you wanna know if I do sock, sock, shoe, shoe or sock, shoe, sock, shoe, you can find those answers in there from Sunday. It kinda gets overwhelming since there are so many questions in there. Also, I’d say 25% of the questions weren’t “True or False” either. So there’s that. I’m sure I’ll do it again at some point when I’m sitting around bored like I was on Saturday and Sunday. Some good stuff there.

However, one thing took me by complete surprise. Minnesotans are hell bent on telling you their state doesn’t have any mountains. Someone asked me about my Peloton, and I had answered that on Saturday, I did a 60 min ride through the mountains of Minnesota. Well, I can’t tell you how many people responded after that with something to the effect of, “I don’t know what mountains you’re talking about but they sure aren’t here in Minnesota.” So let me clarify. The Peloton has scenic rides where there’s no instructor and you’re just riding through video footage of wherever they chose to take the camera. My ride on Saturday is labeled “60 min Minnesota Mountain Ride.” Here’s the description of it: 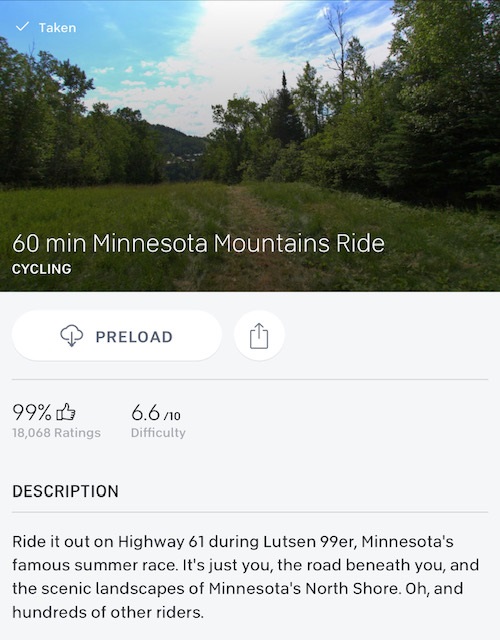 So I guess maybe Peloton exaggerated the word “mountain” when they should’ve said “hills.” I don’t know. But geez, don’t shoot the messenger. I’m just telling you what Peloton calls it. Although after riding it, it definitely didn’t seem like it was mountains that I was riding through. Definitely more hilly. But there you go. Don’t ever tell Minnesotans they have mountains in their state or they’ll be utterly confused what you’re talking about.

Before we get to the crazy social media activity from a couple nights ago, wanted to fill you in on an update to the ending of the season. You know I was able to confirm that chooses Rachael in the end. Was told he even let Michelle go early. Well, here’s another update:

Matt did not propose to Rachael. They are still together today though.

What’s funny is, people always think (including myself) that an engagement at the end of this show is pretty ridiculous since these people barely know each other. However, now knowing that Matt doesn’t propose to Rachael this season, do you think most people will think, “Oh great. That means that can really take their time to get to know each other and hopefully have a long, prosperous relationship?” Hell no. Everyone will basically say this relationship has zero chance because it doesn’t have that “label” of engagement, even though that’s never mattered in the past since so many don’t make it any way. ONE guy who proposed in the final episode ever ended up marrying that same woman, and that was Sean. So whether Matt did or didn’t propose I don’t think should matter in the least bit, since engagements on this show really don’t mean anything. But I can already tell you him not proposing will immediately have people giving the hot take that these two won’t make it. I mean, I don’t think they will either, but not because he didn’t propose. I don’t think they’ll make it because I don’t think for a second Matt is ready for a serious relationship, and never was.

Speaking of Q&A’s, Dylan Barbour sure got people riled up this weekend on Twitter, didn’t he? Yikes. I’m not sure what got into him or why out of left field he decided to do a Q&A on Twitter and essentially rip the franchise and expose show secrets. UPDATE: He has since deleted all the tweets. Well, I think for the average fan that was some tea spilling. But anyone who has listened to a word I’ve written or said in the last ten years has probably heard me say it numerous times. It’s always good though to hear it straight from a contestants mouth who experienced it first hand. I think some of you think I just throw shit out there just for a reaction, or because I just feel like it. I’m not sure. But when I tell you stuff about the franchise and behind-the-scenes look at what’s not shown, I’m usually telling that from a perspective of what past contestants have told me. And what Dylan answered was no different. Well, except one thing I still question…

Dylan was asked the one person he thought got screwed over the most by editing and he answered “Jed.” Now, Jed is Dylan’s boy. Dylan’s been saying this ever since Hannah’s season. So that was nothing new. However, Jed then took to his IG and said he was gonna release a YouTube video explaining everything that really happened and expose some stuff. Well, that YouTube video turned into a podcast that he says will be released today. I’ll be interested to hear what Jed has to say. Does Jed not remember he did a few post-show interviews and podcasts where he basically admitted to the Haley stuff, he just had a different opinion on their relationship than she did? What new info is he going to offer? And if it’s different than what he told Rachel and (then) Ali, and different than what he said on GMA, then why would he expect us to believe him now if his story changes? Also, Dylan made sure to tell everyone that Jed never cheated on Hannah. I didn’t even know that was an accusation. Haley Stevens, Jed’s ex, came on my podcast TWICE and never said anything about Jed cheating on Hannah. Cheating on Hannah would mean he hooked up with Haley post-filming, and she said the opposite – that he basically ghosted her once he was back from filming and that’s why she felt betrayed. If anything, he cheated on Haley, but that’s another story for another day.

The thing with Jed doing a podcast today and allegedly going to tell us what really happened is, he’s not being asked anything. Whatever he says today will just be what he wants you to know. Which is fine. I’ll listen to it. And I’ll compare it to what Haley said to me on the two podcasts we did together, and then decide for myself who I believe. Hint: It’s not looking good for Jed. However, Jed being able to just talk on a podcast, without being asked specific examples of specific situations that happened and getting a direct response, isn’t gonna help his case. I can’t imagine him saying anything today that’s gonna change people’s minds. He’s going to say Haley wasn’t his girlfriend, she thought they were, and yada yada. He’s already told us that. He’s always going to have a different view of their relationship than she did, and the rest of us do. We saw what he was writing her. You heard her tell you the things he was telling her behind the scenes. We know they took a trip together on what, Valentines Day? He can hide behind the “girlfriend” label all he wants and say it wasn’t technically a monogamous, established, exclusive relationship, but c’mon man. If she thought it was, then you’re a horrible communicator, own up to it, and just move on. Jed has a new girlfriend and is seemingly happy in this new relationship. Why is he all the sudden wanting to “out” the real truth of what happened? So bizarre.

Don’t forget to send your emails in for tomorrow’s “Reader Emails” and join me and Ashley Spivey tonight for our weekly IG live. We had a ton to talk about last week, it didn’t save, but we should be fine tonight. You know, unless IG wants to start glitching again. Hopefully we’ll be fine tonight. See you then!