As a lot of you know, outside of 2020 when the pandemic started, there are two guaranteed Vegas trips I take a year – March Madness and first weekend of NFL. For the last few years (again minus the last 2 bc of the pandemic), you can add in the weekend of my Vegas Fan Appreciation Party. And yet again, while I was in Vegas this past weekend (which happened to be one of my best FB/craps weekends ever), fairly important news broke regarding the Bachelor. I swear, it seems like this happens often when I’m there. I know back in March the day I left for March Madness was the day they released the men for Katie’s season and I was on the plane posting info on the guys. Then this past Thursday, news broke from a couple different outlets that the next “Bachelor” is gonna be a guy from Michelle’s season. So no Michael, no Greg, no Andrew. That was the first I’d heard of that, and yeah, I’m surprised, just like I said I would be if it wasn’t Greg when I reported that a month ago. Greg was definitely interviewed, he was someone that I was told they were seriously considering and that it was gonna be him at some point. I guess I shouldn’t have reported that. But that seems to be the problem I’m running into when it comes to next lead announcements.

Some I’ve gotten right in the past, and some I’ve reported too early. It’s really the only secret this show can keep because they can hold out until the official announcement is made. So now you’re asking, “Well who is it from Michelle’s season then?” It’s been almost a week we’ve heard it’s one of Michelle’s guys, yet, no one still knows who it is. I don’t either. I have a possible lead based on a location for filming next season I heard about. But again, if I even say that, it’s still an assumption which people will immediately take as fact. People want to hear what I’ve been hearing about spoilers/tea, but even when I tell them what I’m hearing, that turns into “Reality Steve is reporting that…” no matter if I specifically say “this is what I’m hearing.” So I’m damned if I do and damned if I don’t. I’m not hearing a name of which of Michelle’s guys it is. I’m hearing a location they might be filming in the US this season. If they filmed in Minnesota for “Bachelorette” because that’s where Michelle is from, well, if they film in this place where I’ve heard they’ve asked to film, I’m making the assumption that location was chosen because that’s where this guy is from. But I can’t run with that now because it’s not solid enough to me. I’m just making an assumption that if they went to MN for Michelle, they’d do the same and film in the city where this guy is from. That assumption could ultimately end up being wrong, so I need to find out more.

Is the choice to cast one of Michelle’s guys surprising? Yes. We’ve never really seen anything like it. Nick was announced as “Bachelor” before we’d seen him break up with Jen Saviano on Paradise. Rachel was announced as “Bachelorette” before she was eliminated on Nick’s season. Those are really the only two leads I can remember that were announced before they were “off” whatever show they were on. This is a whole different level. The only thing any of the public knows about Michelle’s guys are the 3 days their headshots, first name, age, and city were released on the “Bachelorette” Facebook page, and then on my IG (and other places that reposted my info) of their full names, city, and IG accounts. ABC hasn’t released their bios yet. I don’t know when ABC is set to make the announcement of who the “Bachelor” is, but whoever it is, no, the public won’t know a thing about him from Michelle’s season since hers doesn’t start airing until October 19th. The next “Bachelor” starts filming, I’M HEARING (guess I need to put that in all caps now going forward so people can distinguish a spoiler from things I’m hearing) on or around next weekend, Sept. 26th. So we’re gonna know who the “Bachelor” a good 3 weeks before we ever see him on Michelle’s season.

Will it be different? Sure. But before you ask why they did this, or why it wasn’t Michael, or Greg, or Andrew, I’d just ask you to save your breath. I don’t know why they went this route. I guess the simple answer is because they can. They can do whatever they want. It’s clearly gonna be someone they gave a good edit to and will come off looking great on Michelle’s season. Will it be someone who went home early? Middle of the season? Made it late? Again, I don’t know. I could see it being any of those really. I guess I might be surprised if it’s someone who made her final four just because that would ruin any suspense as they got towards the end of the season. Like, there’s no way it’s whoever her final 2 guy is since that would ruin the season. And yes, Michelle’s season ended filming this past Friday down in Mexico. So it’s over and done with. I’m starting collect some info now on the season. I won’t have episode by episode spoilers, but I do have some things right now. Trying to find out the winner as we speak. Again, just hearing rumblings now.

With the show only airing only on Tuesdays now through the end of the year with BIP and Michelle’s season, I think we’re gonna go back to what we did last season through the rest of the calendar year. “Reader Emails” will be moved to Tuesday’s, and Wednesday’s will be the episode recap and thoughts. A little low this week since I didn’t have the day before to tell everyone “get your Reader Emails in.” Well, now I’ll be doing that on Wednesdays for them to be run in next Tuesday’s “Reader Emails.” So get your emails in the next 5 days dammit. I know, schedule changes suck, but I still want to have Tuesday, Wednesday, and Thursday as days where there is content on the site.

As for last night, a few thoughts on the episode:

-Maybe it was because I was out of town for 4 days, or maybe it was because there aren’t 2 episodes a week anymore, but it seemed like Paradise hadn’t been on for a month. Thank you for the refresher in the beginning of the episode since I couldn’t remember where the hell we left off.

-While the Brendan and Pieper situation dominated the first 20 min or so, did any of you feel a little underwhelmed how it all played out? Joe and some of the women told them how they felt, Brendan and Pieper didn’t seem to care, and they bounced. For how it was built up, I wouldn’t say that gave us the greatest payoff. You knew from the spoilers they left the show together, but I didn’t think there were many fireworks last night.

-Pieper took to her IG stories last night and wanted to let everyone know this: 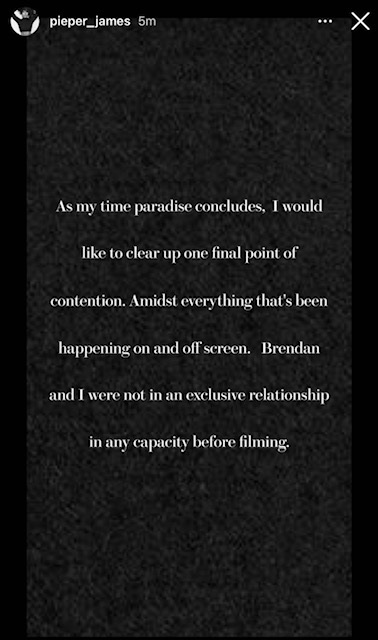 Oh geez. She’s totally missing the point. She’s arguing semantics now. If THIS is what she thinks people need to be clear on, she’s completely missing the whole point of what she did out there. Totally dropped the ball – yet again.

-These contestants have seriously got to stop getting on other contestants for going on the show for followers, clout, likes, etc. It’s so hypocritical it’s embarrassing. Get on Brendan for using Natasha. Get on Brendan and Pieper for having one of the worst pre-show plans ever, then getting to the island, and completely botching the execution of it. But to be mad at them for just wanting a vacation in Mexico to get followers is something every single one of those people are going on the show for. They know it, we all know it. It’s actually insulting to the audience when you can’t admit that. Brendan and Pieper had no shame, although, they didn’t realize they were being caught on camera talking about it.

-I know a lot of you want to live back in the old days, but I’m sorry, this is what the show is now. Everyone in Mexico has access to all the other contestants before going on the show. In the early days, no, it didn’t nearly happen as much. But lets not all be surprised anymore or annoyed by these storylines. I don’t have a clue who’s gonna be on season 8 of BIP next summer. But you know what? I guarantee there will be people on there that hooked up pre-show, use the show for clout, might even be full on dating by the time they get down there. Hell, the show is LOOKING for that so they already have a built in storyline. This is not gonna change. If you want to see a summer show where no one talks before the show and everyone is meeting down there for the first time, you’re watching the wrong show. Complaining about it is useless since it’s going to be what you’re going to get.

-Thomas hasn’t said or done much right in the two seasons of TV we’ve seen him on until last night in my mind. He had stronger feelings for Becca than he did Tammy, which he’s allowed to do, and he told Tammy to her face rather than blindside her. Can’t fault him for how he handled that in any way. Yeah, it sucks to hear if you’re Tammy, and clearly she didn’t take it well, but at least he was honest. And what ultimately sucks and is just a fact of life when it comes to this franchise is yeah, there’s a pecking order. And someone like Becca Kufrin, who’s practically royalty in this franchise, is gonna get chosen over someone who’s a lesser name in terms of airtime, how long they lasted on their season, etc. Again, another reality when it comes to this show. But in the grand scheme of things, of course Thomas chose Becca over Tammy. Nothing against Tammy at all, because she was enjoyable this season to me. I just know how a lot of the guys on this show think and work, and Thomas choosing Becca was a no brainer.