So I had something pretty good and pretty funny for you today to go over, but then, well, the guy (I’m assuming it’s a guy) already quit was he was doing because he got called out for it. I mean, we know there are some crazy whack fans in this franchise. But honestly, this guy takes the cake. Funny thing is, I’ve never spoken about him before. I’ve always meant to but then I just forget. And since I don’t know his true identity, it’s not like anyone can really find out who it is, but, when you do the same exact thing over and over again and numerous women start being duped, I finally remembered to point it out now after it happened again over the weekend. Truly someone has way too much time on their hands to be doing this, but alas, he pulled it off again this weekend, I had a couple women email me over it, so I figured I’d bring it to the forefront for the first time in case it happens in future seasons. He’s already stopped this season seemingly, since the IG account is gone now.

So what someone does (and again, I’m assuming this is a guy) is he creates a fake IG profile of a famous Bachelor. Sometimes it’s the lead, sometimes it’s just one of the popular guys. And he creates an IG account of someone who doesn’t have a blue check mark yet and makes the new IG handle VERY similar to the real persons. Not to mention, he basically takes all the pictures on their current IG page and uploads them onto this new fake one so unless you look at the dates of uploads, you can easily be fooled. Anyway, this past weekend, this imposter created a fake IG account for our new Bachelor, Clayton Echard. The real Clayton’s IG is @claytonechard. This fake one that was created (and was deleted over the weekend after he was called out) was @clayton_echard. I screen shotted it before he deleted:

Same exact pics from the real Clayton’s IG. This guy literally took all 33 of Clayton’s posts and posted them to this new account. Then he takes it a step further, and in his IG story over the weekend, just did a story that had his Snapchat name in it, seemingly so people would snap him, which I also got a screen shot of:

Then what he proceeds to do for any woman that snaps him, is he tells them how good they look, or how hot they are, asks if they’re single, and if the woman engages enough, will eventually ask for nudes. How do I know this? Because this is the third different season where I’ve gotten emails from women saying something along the lines of “I’ve been snapchatting with __________ and he’s kinda creepy.” The other two guys I remember getting emails about were Nick and Greg Grippo. And these women would show me the snap conversations they were allegedly having with Nick/Greg/Clayton, and it’s hilarious how this guy never changed up his game. Always spoke in one and two word sentences. Always commented on how hot they were, and then ultimately would always get around to trying to get nudes out of them. He starts out on IG, he lures them with his fake snapchat account, they start talking to him there thinking at first he’s the real person, then once he starts getting creepy, they’ve either emailed me at that point asking if it’s legit, or (I’m sure plenty have never told me they fell for it and maybe are embarrassed, but I doubt this perv would’ve kept doing this if he was never successful), they’ve figured it out themselves. I don’t have the fake Nick and fake Greg ones saved anymore. I should’ve released them when I did, but here was the fake Clayton reaching out to one of the women first on IG this past weekend: 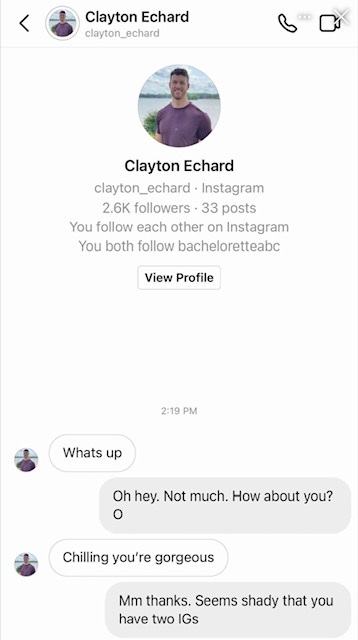 That’s how it starts out. Then he gets them to move on over to Snapchat because that’s where seemingly he thinks they’ll feel more safe being sexual and sending over nudes.

Here’s two different convos women approached me with this weekend regarding the Clayton imposter. Protecting their identities for obvious reasons: 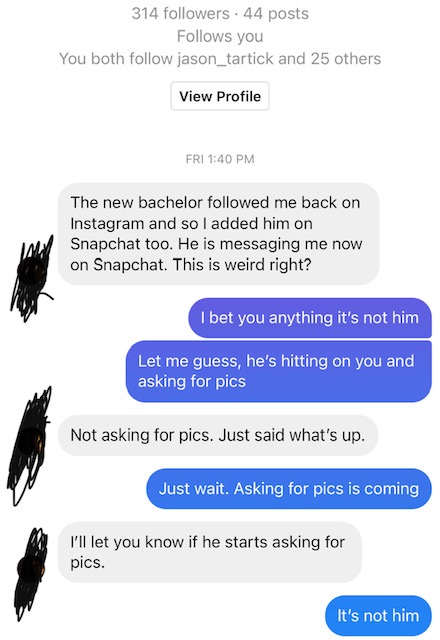 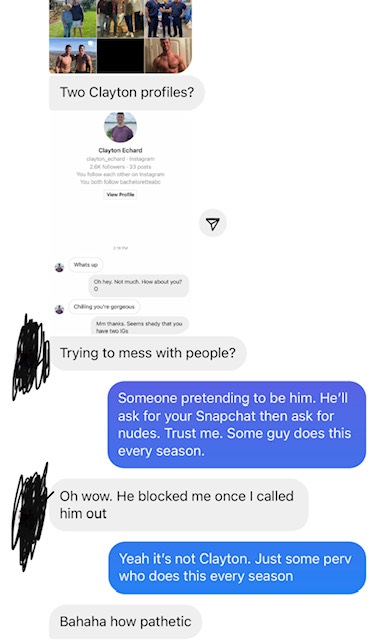 I’m willing to bet someone did send nudes to a fake Nick, Greg, or Clayton. Or at least flirted thinking they were talking to the real them. Those are the only 3 I’ve ever been emailed about, so I gotta believe this imposter has tried pretending to be other guys from the franchise as well.

So just to be clear for those that skim rather than read. This is NOT Nick Viall, Greg Grippo, or Clayton Echard creating fake accounts themselves to try and lure women. This is an imposter who has now done the same thing for those 3 different guys that I know of, because he’s used the same dialect in all three conversations I’ve seen pretending to be all three of those guys at different times, and basically, well, his gig is up hopefully. As you saw above, one of the women called out the fake Clayton this weekend and the account is already down. But hey, I’m sure this guy isn’t done and will be trying in the future pretending to be another dude from the franchise. So women, if you ever get a random DM from a Bachelor guy and wanna believe it’s real, just do a little digging into the account they sent it to you from, see when the pics were uploaded (they’re usually all on the same day), and make sure you don’t get duped.

That is my PSA for the day. Glad I could help those out there. Although, I already know one response that’ll come from it. Just waiting for that email to happen. However, I’d love to hear any more stories if anyone actually did carry on a conversation with someone they believed to be a Bachelor guy and were either duped, or, caught onto it real quick. We know catfishing is a thing, so, send in your stories if it happened to you.

Running late today, but I will post a couple of the women I expect to see on Clayton’s season tomorrow. I’ve heard the women for Clayton’s season will be arriving today and tomorrow in LA, which means you can expect for ABC’s Bachelor Fan Page to release all the possible women in the next couple days. I only had about 4 of them, and now 2 of them I don’t even know if they’re going anymore. Gonna try and find out today. But if I get anyone else today, I’ll add them to the 2 that I definitely heard are going and put that in tomorrow’s column. Here’s one thing I’m hearing about Clayton’s season: I’ve already told you filming starts at the mansion this season. I’ve heard there will be international travel for his season. Heard a couple places but hasn’t been solidified. I just heard they do plan on going overseas. I mean, other reality shows are filming overseas, so I guess it shouldn’t be too much of a surprise. I will try and find out if the locations I heard are definites and report back if/when I do.