A lot to get to in regards to Clayton’s season filming right now. Most of this was tweeted out yesterday and put on my IG, so if you followed there, this won’t be much news to you. One thing that’s been brought up is that Katie has said she’s going to Toronto at the end of the week after she does a stand up performance on Friday night. This led people to believe she’d somehow be part of Clayton’s filming. I don’t see how that’s possible. If I’m not mistaken, Katie said she has a stand up gig on Friday, then leaving for Toronto after that. The rose ceremony in Toronto is tomorrow night. So yeah, no overlap there. Don’t expect Katie to be on Clayton’s season.

Yesterday I filled you in on some things that have happened on Clayton’s season and what’s happening now. The biggest piece of news I guess was this one:

(SPOILER): While I did not know who got Michelle’s first impression rose until that group pic, I do know who got Clayton’s.

I don’t know why I was never able to find out who got Michelle’s first impression rose all season until ABC’s cast photo spoiled it yesterday (it’s Nayte). But now that we know it’s Nayte, is anyone all that surprised? That’s something like 5 of the last 7 Bachelorettes who ended up picking the guy they gave their first impression rose to. We had 4 in a row that did it. Then Hannah Brown broke the streak by giving it to Luke but picking Jed in the end. Then Clare got it back on track with Dale. Tayshia gave it to Spencer. Then Katie gave it Greg, but never had a chance to give it to Blake since he joined later. Now Michelle has started a new streak. Lets see if it continues.

But anyway in regards to Clayton giving his to Teddi, I mean, that’s great and all, but as we know, and as you can clearly see in Bachelor Data’s coverage of it, only one woman in 25 previous seasons got the first impression rose and went on to win, and that was Hannah Ann on Peter’s season. So it’s not looking too bright for Teddi.

Even though that only goes back to Season 14, just know every season before that none of the first impression rose recipients ended up winning either. Pretty crazy how it’s 1 for 25 with the men, yet 5 of the last 7 or 8 women’s seasons their intuition was right on the first night. 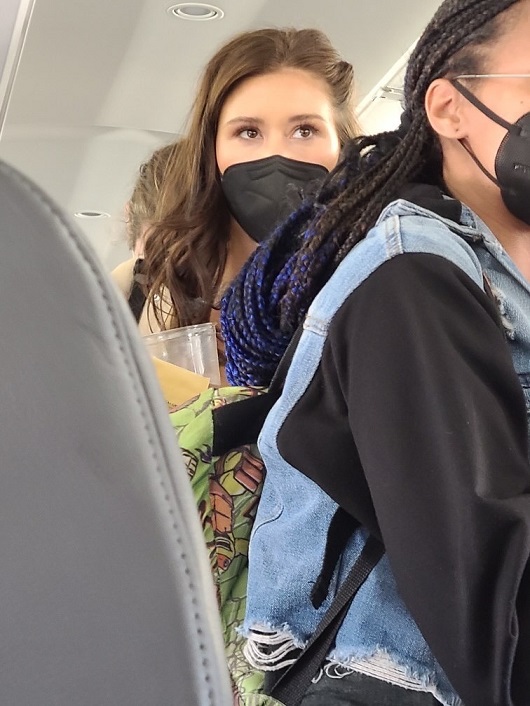 More where those came from, but, I’m not releasing the remaining 12 yet because I want to see how things play out. I understand that you need to know everything 3 seconds after it happens, but trust me, you’ll have all the spoilers you need this season. I pretty much have everything up to this point in Clayton’s filming outside of one date. Once they get overseas, the dates might be tougher to figure out, but, the eliminations I don’t think will be.

One thing to mention from that flight on Saturday that I don’t feel like re-writing:

On Saturday on their flight from Houston to Toronto, Clayton’s women said they were a Bachelorette party for “Jessica” and singing “The Boy Is Mine.” Bad acting, ladies. In the past I’ve heard them tell people they were a “soccer team,” “lacrosse team,” etc.

Because normally when they first travel, it’s 15 people or so. Then they go to the next place and it’s 12. So if you’re in an airport and you see a group of 12-15 similarly looking people, you’d probably think it’s some sort of team or Bachelor/ette party. The odds of someone who studied the faces of Clayton’s women for the 3 days they were on the Bachelorette Facebook page, or, studied them enough on my IG feed or other places where they’ve been posted, then recognizing them in an airport, is really very slim. Hell, the pictures that were sent to me of them on the plane was from someone who had no idea Clayton’s season was even filming. They just noticed it more from what they were saying and no idea who they were. I’ve just always found it humorous they use the same type of “teams” every year when I hear stories about travel. Jessica’s Bachelorette party. Psssshhh. Like I said, bad acting. So hey, if you’re in the Toronto or Austria or Croatia airport and you see a group of women, feel free to call them out on their BS. I’d love to see how they flip the script and still try to pretend they’re not.

As for Toronto, the one date I know of was yesterday’s group date that was a comedy roast hosted by Canadian comedian Russell Peters at Archeo restaurant. 9 women were on it, which is interesting, since that means that today will be the return of the 2-on-1, and someone had a 1-on-1 on Sunday that I don’t know about yet. However, knowing about the villain this season, and knowing she wasn’t one of the 9 on the group date yesterday, I can pretty much guarantee she’ll be on today’s date. If any pictures of today’s date gets out, I’ll fill you in on who it is. If not, then I’ll just wait until I post more about the season in upcoming weeks. But of course there’s tons of “spoiler” sites out there that have all this information already so I’m sure everything I just laid out yesterday and in today’s column is just old news to you at this point anyway. Oh wait…

When ABC released the possible women for Clayton’s season on their Bachelorette Facebook page, there were 33 women. 3 of them never ended up getting cast. I told you about Salley Carson days after that happened, so she’s not on. The two others were Breauna Jade and Kara Gandy:

The 3 women who were in the initial cast list who never ended up making final cast were:

There’s plenty of other things I have about this season that I’ll be releasing in the weeks to come. Like I mentioned to start today’s column, I don’t think it’s a coincidence that once we got back to regular filming with travel etc, and the show isn’t being filmed in a one location bubble that’s blocked off from everyone else, the spoilers returned. Yeah, it sucked for the past 4 seasons not having as many details, but I told you that was probably gonna happen. And it did. Not for Clayton’s season. There’s been plenty of pictures already, you know the first impression rose, you know all the locations they’re headed, you’re getting date pictures as they happen, you’re getting travel pictures, etc. Things are trending back to normal. Gonna be an interesting next month to see how his season all plays out. I’ll keep you updated as we go.

“Reader Emails” (the few that we have this week), begins on Page 3…

“Reader Emails,” BIP Ratings, Clayton’s Filming in Houston, Tyler C. on SNL, & (EXCLUSIVE) Where Are They Headed for Clayton’s Overnights & Final Rose Ceremony
The “Bachelorette” Michelle – Episode 1 Recap, Clayton Filming, Ryan’s Ex Confirms, & There Are How Many Names for Apples?
To Top