Big day today. Got a lot of stuff to cover AND we are officially back to having a “normal” season of the “Bachelor” as hometown dates begin today for Clayton’s season and they are doing it like they always had pre-pandemic. Traveling to the hometowns of the women. Will update you on that next paragraph. We didn’t have normal hometowns for Tayshia’s, Matt’s, or Katie’s season as we know, since the families were all brought to those particular locations. Now, since most of Michelle’s spoilers this season are scarce, I guess there is a possibility they traveled for her hometowns (which was the plan pre-show before the Delta variant arose right around the time her hometowns would’ve happened). So as of this moment, I don’t believe Michelle traveled for her hometowns. The timing of the schedule didn’t seem to allow for it and, most importantly, there’s never been a season where when they traveled for hometowns, not one of them were ever seen filming. And that didn’t happen for Michelle’s guys, so, my guess is families were brought to Minnesota for her season. However, that’s not the case for Clayton’s as his hometowns begin today in Virginia Beach, VA with… 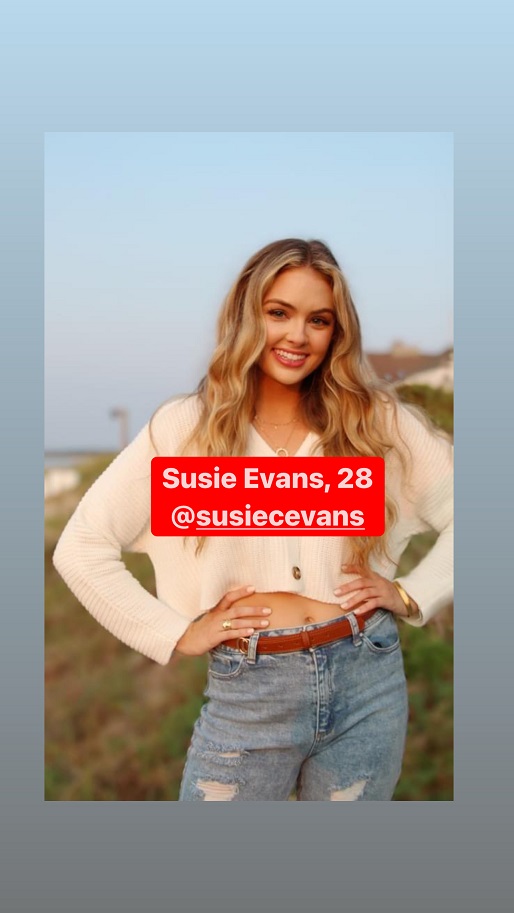 Susie won Miss Virginia Teen USA 2011 and Miss Virginia 2020. I’m sure you’ve heard a couple weeks ago Dean reference the fact that his college ex-girlfriend was on Clayton’s season and that Caelynn also knew someone as well on this season. As I referenced in past columns, Dean’s ex is Gabby Windey and Caelynn knows Susie having won Miss Virginia Teen USA in 2013 and also competed in Miss Virginia in 2016 and 2017. So she knows her through the pageant world. I don’t know where in Virginia Beach they’ll be today, but you never know with hometowns if/when pics get out. There’s been some seasons where pics have gotten out of all four hometowns, some where three hometowns got out, some with two, and some with one. Time will tell today, so anything I happen to get I’ll be tweeting out and posting on my IG stories.

As for the remainder of your hometown, I’m not 100% confirmed on them as I type this, but I feel I’ll know them in the next 24-48 hours. If/when I do, I’ll be posting them on social media and/or tomorrow’s column. The fact that I found out Susie’s was today, and I’m positive on one other one who’s getting one, I think it’s only a matter of time before I find out who the other two are. Especially considering it’s only between 3 possible people. So keep it on my socials for any breaking news regarding that.

On Friday I did something I hadn’t done before, and that was take questions from readers on my IG live. It ended up going for 3 hours and it’s still up on my IGTV. In case you missed it, here it is:

Now, I don’t expect anyone to stay tuned for all 3 hours, that would be absurd. But a lot of things were covered in it. Dave Neal joined me I believe in the first hour and we covered what he’d reported on Friday, which was that he had heard from a single source that Michaell Allio, the single dad from Katie’s season, was gonna be the next “Bachelor.” Dave and I had texted earlier in the day before he came on because when I saw him post the screen shot of the email he’d received about Michael, it was literally word for word the same email I’d gotten from the same person. So that person had told both of us what she was hearing, and that was that Michael was set to be the next Bachelor, how the show had made arrangements so it’d work out with his son James, etc. Again, we’re almost 4 months away from filming happening. So many things can change when it comes to this. Are they leading Michael on? Does Michael think it’s him, when in reality, they’re telling other guys as well? I guess we won’t know for a while. I mean, this show still hasn’t officially told us Clayton is the next “Bachelor,” so I doubt the announcement on who will be the Bachelor AFTER Clayton isn’t coming for a while now. But yes, the rumor is it’s Michael since, well, he seems to be pretty confident it’s him. Still a while to go before that filming starts happening, so nothing is official yet.

ABC did announce the next “Bachelor” season starts airing Monday, Jan. 3rd, the 13th consecutive year the show will begin the first Monday in January. Yet, in that same announcement, they still didn’t tell us the “Bachelor” is Clayton. I guess it’s a moot point now. Everyone knows. Hell, the guy starts filming hometowns today and they won’t acknowledge it’s him. Very weird on their part, but whatever. They’ve always marched by the beat of their own drum when it comes to this. So now the next two announcements that should be coming from them (whenever they may be) are that there will be another “Bachelor” season after Clayton’s and who it is. But I wouldn’t expect that until probably the new year.

I know Michelle and Joe both being at the Vikings/Cowboys game this past Sunday night (not together) had the speculation running rampant, but there’s nothing to see there. Michelle is not with Joe, she’s engaged to Nayte, has been since the show ended filming on Sept. 9th/10th, and that’s that. We know they both live in Minnesota, and both are big sports fans. Not the least bit surprising that they’d be two people in attendance for the NFL Sunday Night Game of the Week along with 66,631 other people.

And finally, I know Jed gave his first real interview since his season with Kate Casey that came out a few days ago. I haven’t listened to all of it, but I read the recap of some of his quotes on People.com. I’m bringing Kate on the podcast this week to discuss the interview with Jed, along with some other shows news. So look forward to that on Thursday.