So at this point, I wanted to contact Laree to corroborate her story. Granted, the photos from Valentine’s Day last year showed a little, but I wanted the full story. So I had an IG message conversation with Laree asking her everything I wanted to know about her relationship with Nate that lasted from Jan-March of 2021, obviously overlapping with his time with Kelsey. Rather than transcribe what Laree told me, I figured I’d just let you read our whole conversation yourselves. Here you go: 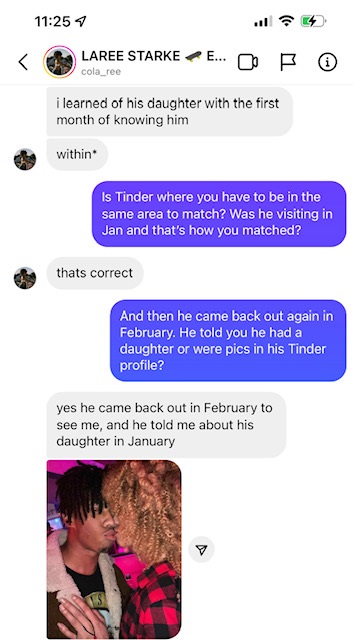 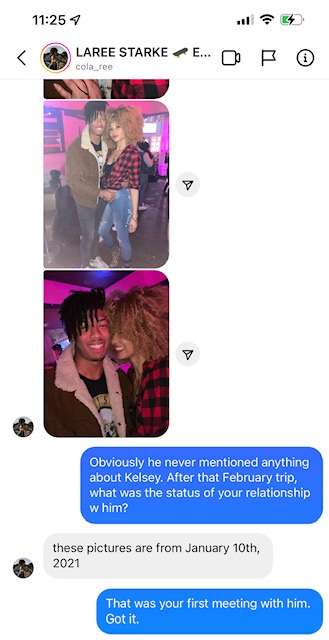 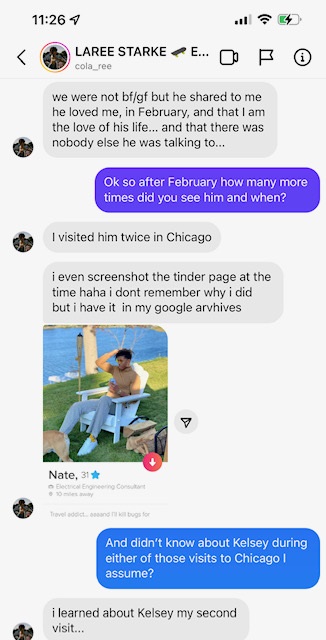 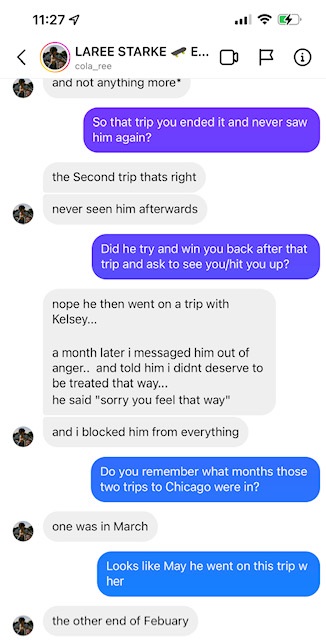 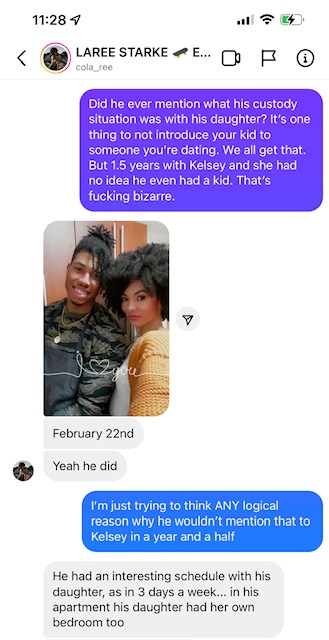 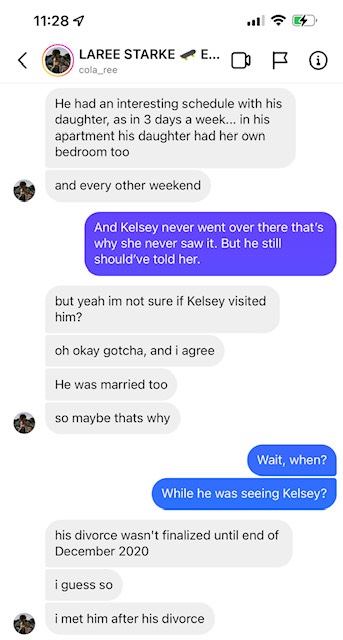 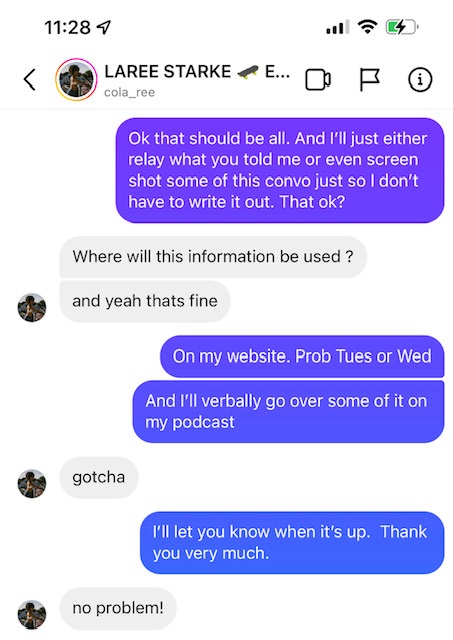 So yeah, Laree’s story checks out and I continued to speak with both. As we dove deeper into the whole Valentine’s Day 2021, come to find out Nate sure was busy that day. We already know that on Feb. 6th 2021 on a trip to Atlanta, he took Laree to dinner. Then on the actual date of Valentine’s Day, Feb. 14th, while back in Chicago, he took Kelsey to dinner and showered her with gifts. Come to find out though, while taking Kelsey to dinner and spoiling her with gifts that day, he’d also sent flowers to Laree back in Atlanta along with a message calling her his “lifetime angel,” she’s “stolen pieces of his heart,” and that he’s never felt “a mature type of love and care before.” Here’s his message and gift to Laree on Feb. 14th 2021, followed by what he gave Kelsey: 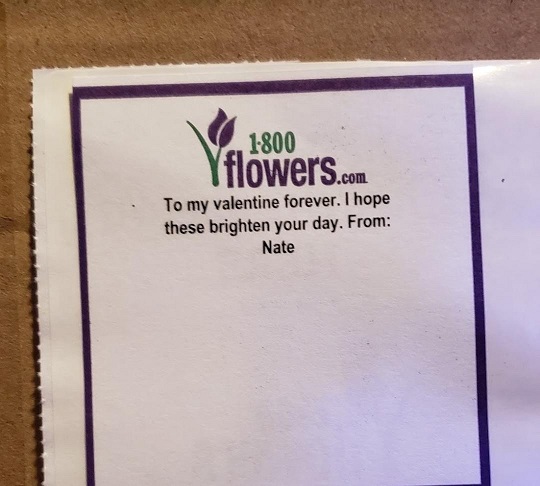 And just to add on a little more to what he told Kelsey and how he felt about her, here’s a text message he sent her: 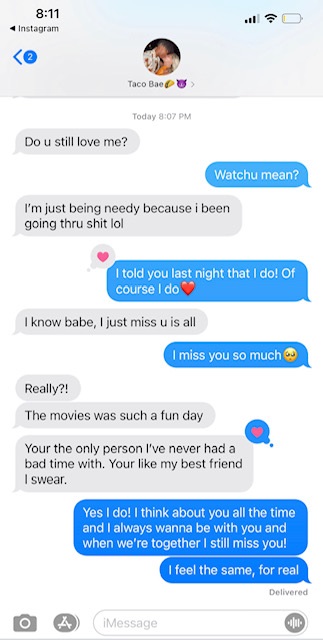 I want to thank Kelsey and Laree for coming forward and sharing all of this. Both of them felt hurt and played by Nate, with Kelsey moreso because it took Nate going on the show for her to even find out he had a daughter and was once married. I was not going to run this story if it was just me relaying what they told me. This is the only way I’ll run ANY story in the future. People have to be held accountable. And if you want to share negative information about a contestant, you have to be willing to show proof and put your name behind it. Nowadays, unfortunately, you need receipts to be believed – especially when it comes to anything in this franchise. Both women provided them and I can’t thank them enough.

Please just look at this objectively. Kelsey and Laree aren’t lying. The proof is all there. I know facts don’t matter to some people anymore, but, maybe they should. People have always complained when people speak out on social media that they never provide proof. I’d say this this proof. I’m certainly not going to tell anyone how to feel. However, if you somehow spin this into Kelsey and Laree are in the wrong here and you come down on them and Nate did nothing wrong, I’d say you’re being completely biased and not looking at this objectively. Did Nate commit a crime? No. Did Nate physically assault anyone? No. Do I think Nate is the worst human being ever? No. But is that the standard now we’ve set for men in this franchise? That because he didn’t do anything criminal or assault anyone, that nothing negative can be reported about them? This is Kelsey and Laree’s story. They have every right to share it. Especially after watching this season and seeing this golden edit the guy has gotten. What you just read certainly seems to be a 180 from how he’s being portrayed. The level of manipulation and lying in these stories is off the charts.

When I asked Kelsey exactly why she chose to speak up about this, and what she wanted to get across by doing this, her response was:

“I wish Nate all the best. I don’t want to affect his future, but it’s important for me to try and prevent another girl from being blindsided by his secrecies.”

Will Nate respond to this? Don’t know. I mean, I’m certainly curious what he was thinking during all this. I genuinely want to know why you wouldn’t mention you had a child to someone you spent that much time with, but, you had no problem sharing that info with a Tinder date from another city and sharing it on national television on a first date with a woman you don’t even know? Whether he addresses it or not is up to him. Lets just hope if he does, he doesn’t attack either of these women in any way. Would not be a good look. Just own what you did and be better in the future. There isn’t any gray area here from what I can see.

One final thing: You might ask how did Kelsey not know he had a child? Did she never see his place? Kelsey told me she always felt something was off, and she only went to Nate’s place one time during their relationship and stayed the night. Did not see anything there to make her think he had a child. She admits that was a mistake on her end, she always suspected something was off but never really acted upon it when she should’ve. However, I wouldn’t say that is any reason to make this story her fault. Or Laree’s. These photos and texts messages show someone who clearly knew what he was doing, was playing two women at once, while keeping his daughter a secret from someone that he had a year and a half invested into. Why? I have no idea. I’m genuinely curious though because that’s totally bizarre. Neither Kelsey nor Laree deserved any of this.