Maybe I should do a biweekly column on BIP filming. And why does biweekly mean both twice a week AND every two weeks? How about pick one, biweekly, since those are completely different? pic.twitter.com/MzFCFkUuPD

This tweet had two meanings, but it was the hidden meaning I was focusing on more. If what I was told was gonna happen never ended up happening, then I would’ve just addressed this tweet as it was written and never even mentioned to you anything about a second meaning. Would’ve just focused on the “Maybe I’ll write twice a week about BIP.” But what I was told was going to happen a month ago happened last week during BIP filming. I’m sure you can guess what it is now, since the word “biweekly” shows up 4 times in that tweet. Here’s what you need to know happens on BIP: Demi is bisexual and she comes out on “Bachelor in Paradise.” Let me explain…

I was told about Demi liking women all the way back in January during Colton’s season. Even still have the email sent to me of pictures with her kissing another woman. But obviously I was never going to out Demi. That’s her story to tell whenever she was going to tell it. Why do you think I tweeted about Demi during the WTA that she’s trying too hard? Because I knew at the time she was interested in women (didn’t know who at the time), but just so happens to be Catherine Agro’s (Colton’s season) roommate. They met through Catherine. So it was kinda pointless to sit up there and get involved in all the drama when you were never into Colton, was the last guy she hoped was the “Bachelor,” hated the fact he was the “Bachelor,” and admitted she was never attracted to him (she said all of this after the fact on Olivia’s podcast). Anyway, I just thought it was her trying too hard since I knew she had started seeing a woman at the time, so it was just a bit much for me. But did I ever come close to revealing that? Absolutely not. Never crossed my mind.

As prepping for Paradise was going on during the last month, word got around and I heard that Demi had a girlfriend and that she was planning on bringing her on the show. I didn’t really understand at the time how it was gonna work, but, I knew she had one and Demi was set to go on BIP, so it seemed like it was going to happen. Then last Tuesday I was told her girlfriend left for filming and she did. Demi’s girlfriend showed up on the beach late last week, Demi told everyone this is the woman she’s been dating, they were given a date card that night, and got to stay on the show. Demi’s girlfriend is Kristian Haggerty: 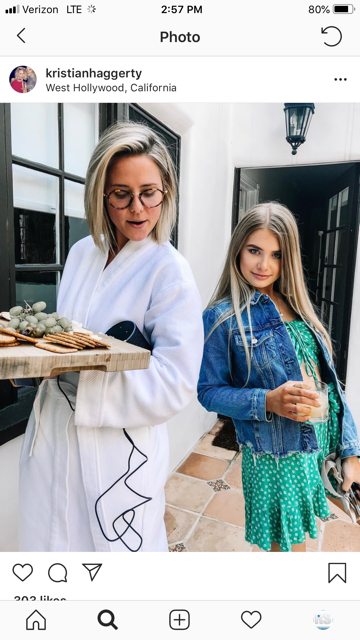 As mentioned, Demi and Kristian have been seeing each other since around February, and all this of Kristian coming on the show was pre-planned. Demi talked about it with producers, she knew Kristian was gonna be brought in after filming had started, and she wanted to use the show as an outlet to come out as bisexual. They’re not having Kristian battle over other men for Demi or anything like that. They are there and they are a couple and, seemingly, I guess just seeing where it goes. But the fact they didn’t leave together right away makes me think these two will stay til the very end. This show basically has no rules anymore, so I don’t have a clue what they’ll do on rose ceremonies where guys are giving out roses.

Kristian isn’t Bachelor Nation obviously, so I don’t get what the point of keeping them on the show is other than to exploit their relationship. ABC can pound their chest now saying, “See, we care about same sex couples!” when they basically haven’t given a rat’s ass about any sort of equality on this show ever before. But Demi and Kristian are part of this. I get that she wanted to come out and do it on the show, and I have zero problem with Demi being bisexual. More power to her. But could she have just done this on an Instagram post one day and posted with Kristian? Or even just given her story to a tabloid and get a featured story? Of course she could’ve. But Demi is about Demi. Some may think this is genius that she wanted to be sure she was the center of attention and part of the ground breaking first same sex couple on this show, and some will find it exploitative. Make no mistake, it’s all about Demi all the time and the show is eating this storyline up. Look at some of her quotes to ET just a month ago talking about Paradise. She was in a relationship with Kristian at the time of this interview. Of course she knew what she was doing:

“We’re renaming it Demi-dise if I go. I’m going to run that beach. I gotta be the queen.”
“I think it would be easy to get really involved with someone right away, but then it’s Paradise, and people can come in later, so what if someone comes in later? I just need to keep it open and play the field.”

It’s always about Demi. Always. And that just gets a little exhausting and nauseating to me. She went on the show knowing she had a girlfriend, had everything pre-planned, exchanged roses with Derek the first two rose ceremonies, and then her girlfriend comes in. Just knowing the way Demi is since the second we’ve seen her and loving having the focus on her, again, I have no problem with her being bisexual. It’s not about that. But just this whole performance about using the show to come out just seems a bit exploitative. My opinion is just that it could’ve been done another way, that’s all. Some will agree, some will disagree. That’s fine. But you can bet your ass ABC loves this and will scream it from the rooftops how ground breaking it is for their show to have a same sex couple on it. That’s why they’re allowing it and seemingly not caring about any sort of rules for the show.

Now, as for Derek, you’re probably asking did he know this was coming? From what I’m being told, he wasn’t completely blindsided. I guess there had been talk either before the show or on the show by Demi that she had dated women in her past. So I don’t think Derek physically expected Demi’s girlfriend to show up during filming, but I don’t think he was all that shocked by it either when it happened if that makes sense. I think the seed was planted so he wasn’t completely caught off guard.

Whew. I’d say that’s enough exclusive info for one day. Now lets get to talking a tad about what we saw last night that literally insulted all of our intelligences.