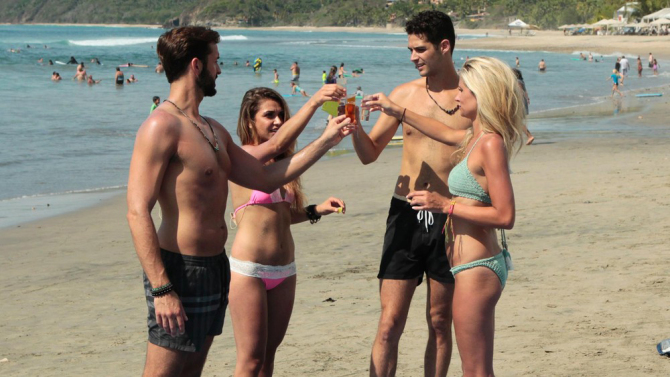 Not an hour after my post yesterday where I said you’d be hearing that production had completed their investigation, found no wrong doing, and you’d be hearing an announcement any day now – Warner Bros. came out and basically said just that. So the only thing at that point to start discussing was “Where do they go from here?” With the statement saying that filming would resume on production, we got our answer pretty quick. I didn’t know how the logistics worked, and knowing they originally only had the resort until the 26th or 28th, could they get everybody back there so quickly, how easy it was to maybe extend their time at the resort, we didn’t really know how it was all going to play out. But here we are. I can report to you that EVERYONE who was still there when production was stopped is headed back to Paradise and will be there by tomorrow, with filming on the season resuming by this weekend. So yeah, I guess it was pretty easy to get people to come back there as soon as possible since most were chomping at the bit to be on. There are still plenty of things we don’t know in regards to what’s gonna get shown and what not, but I can tell you everyone will be back in Mexico by tomorrow and filming will resume by the weekend since they don’t need to do photo shoots, cast photos, etc since that was done already. Once everyone is there, they can jump right in. You’ve already seen plenty of them on IG mention they’re headed back.

As for DeMario and Corinne, I highly doubt either one will be going back, but I haven’t heard anything either way. I can’t see in a million years Corinne being asked back. DeMario, well, wouldn’t the ultimate storyline be if DeMario is asked back and he gets engaged at the end of this thing? Talk about a redemption story. It would almost be too good to be true – hence the reason I’d still be surprised if it happened. But I’ll let you know either way if either of them return. In terms of “Where are they going to pick up filming from?” That I don’t know. Do they use the footage of the three days that were filmed before production was shut down? Do they just start all over this weekend and re-create the dates that already took place? Do they just pick up right at the first rose ceremony that they were set to shoot when the complaint came in and they stopped filming? Nobody knows yet. I’m sure we’ll have those answers shortly. I mean, if I was able to give you the spoilers for the first 3 days of filming, I don’t see why at some point down the line I won’t have all your BIP spoilers for you this season. I had them for your first three seasons of it, so I’d be pretty surprised if I don’t get this season. We’ll see though.

Corinne’s lawyers have spoken out giving their response to Warner Bros. concluding their investigation. I mean, they wouldn’t be doing their jobs if they just said, “Yep. Nothing to see here. We’re done.” So they will now start their own investigation into things, and I’m sure they’ll keep us informed publicly on any findings they come across. Maybe Warner Bros. third party investigation was completely incompetent and Corinne’s lawyers will rip it to shreds and find a whole bunch of stuff that disputes it. Or her lawyers will conduct their investigation and find nothing further to do with the matter and it’ll go away. I guess in due time we’ll see. Let’s let them do their own investigation first, tell us their findings, then go from there before we start declaring we know everything that happened. Personally I don’t think they’ll find much, but then again, these are lawyers we’re talking about here.

One sentiment being shared a lot yesterday was that “Oh, this was all a publicity stunt for the show and it worked. Now more people are going to tune in.” Really? And you know this how? You can prove this? Look, it’s a very easy take to have. And you’re entitled to have that opinion. I just think it’s wrong. I think publicity stunts are done for shows that are dying, on the verge of cancellation, and whose ratings are suffering. BIP didn’t need to create a possible fake sexual assault on their set to generate interest in their show. It’s a summer hit for them. Why inconvenience location, cast, and crew for 10 days just to draw some publicity for a show that was already popular? Doesn’t make a whole hell of a lot of sense to me. But in reading some of the response yesterday, people who are convinced it was a publicity stunt are never going to be convinced otherwise. Just use your head people, that’s all I’m asking. That’s an awful lot to go through for something that wasn’t broken.

And finally before we get to “Reader Emails,” Michelle Money posted the trailer for the new movie she’s in called “By Any Means” on her IG yesterday. She plays a detective in a thriller about a kidnapped reality start. Or was she? Here’s the trailer if you missed it: