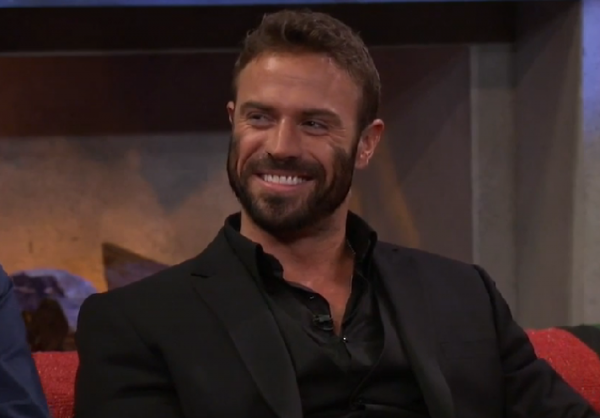 You know, I pretty much joke all the time about Chris Harrison and what a ridiculous easy job he has. And lets face it – he does. There’s nothing remotely difficult about his role on the show. Time consuming? Yes. Away from his kids 4-5 months a year? Sure. But his actual work when he’s away from them? Well, lets just say a lot of people could do it. But he’s become synonymous with the show, which is why I doubt he’ll ever be replaced. As long as this show is on the air, I’m guessing he will be the host, despite rumors to the contrary. “The Ringer” did an interesting piece on Chris last week that broke down his actual screen time every episode this season. Frankly, it’s mind boggling how little he does. Like, we all knew he basically did sh** and we barely saw him other than to hand out the first date card of the week then show up at the rose ceremony, with the occasional group date appearance thrown in. But yeah, I’m glad the people over at “The Ringer” took the time to dissect this because I sure wouldn’t have any interest. But it is still pretty laughable how little we see of him in any given season. And to think he gets paid roughly $60k an episode for that, yes it’s now official, Chris Harrison has the best job in America.

We’ve heard the “changes” made to “Bachelor in Paradise” after the shut down in production, but didn’t know how true they were. Vinny Venteria, he of JoJo’s season, last season of BIP and this season as well, talked about those changes for season 4 with E! Online. I’m still chuckling at everyone saying filming was only 10 days this season. Yes, after they returned to film it was 10 days, but there’s still 3 days of filming that happened before that which will be used. Considering the first 3 seasons only took 18 days to film, it’s not that crazy that this season was only 5 days less.

I was alerted yesterday on Twitter that Chad Johnson showed up on “Celebrity Big Brother: UK” as a contestant. I’ve never watched that show, then again I’ve never watched the US version either, but how is he on that show? Like, would people in England really consider him a “celebrity?” Would they even know who he is? Whole thing is weird to me. Well, apparently he made quite the entrance as you’d expect, playing his character like only he can. Seriously, what an ass clown. The guy is about as fake as you can get. It’s not even the least bit entertaining anymore yet people eat this sh** up. I don’t get it.

I don’t know about you but I find it quite refreshing that peter is actually being realistic about proposing, we are conditioned as viewers to expect a proposal at the end of the show but I feel that he’s actually reflecting what most of us think, who gets engaged after technically knowing someone for 72 hours except in bachelor land, granted he may get engaged at the end of he is indeed the bachelor, just my two cents on that observation

Love your column and podcast. One question, are the contestants and lead contractually obligated to propose and/or accept a proposal?

I’m really sick of Team Peter people. I’m honestly not sure if they’re watching the same show I am. How can’t they see he’s just not that into her? I’ve met a lot of *Peters* during my forays into dating and they’re all the same. He gives you just enough to make you feel as if there’s a chance but casts enough doubt that you don’t have the right to be mad when he screws you over cause he was *honest* with you. But really he’s just biding time til something better comes along. I hate how people are eating it up (including Rachel’s family). Why even be on the show if you don’t want to propose? Oh right, to get reality show famous.

I know you’ve alluded to the fact that out of the final two, Peter may be the real player here and I’m hoping you change your mind and give us the details! I’m thinking maybe you’re keeping it close to your chest until we know he’s for sure the Bachelor.

As for Bryan, I really do hope he’s the real deal. There are so many Peters out there and hardly any Bryans so it would give me so much hope if after all this he doesn’t turn into a self serving opportunistic douchebag. Fingers crossed!

Love reading what you write! Since we’re almost on the horizon of the next season getting filmed, I had a few questions.

1. When they’re casting for the next girls for The Bachelor (ie: Peter, I guess), do they take in to consideration what kind of people the lead likes? For a few of them, sure. Do they make sure all 25 are to the leads liking? No. They’re casting a television show.

2. Also, how many girls does casting choose to go to that final round where they’re locked up in a hotel? I’ve heard it’s 100, and then they choose the 25. But I’ve also heard they only bring in the final 30-25 to it and then either keep all of them or eliminate just a few. 50.

3. Do you think producers ask the lead to keep around their next potential bachelor/bachelorette intentionally until they’re in the final 4? Like, “hey, we know you wont pick this person but we’re considering them as our next lead so please keep them around for a bit.”

Hi there. Devoted reader and podcast listener. Maybe you posted this and I somehow missed it. Was Peter given the chance to appear on Andi, Kaitlyn, and JoJo’s seasons but refused each time until Rachel became the lead?

I posted something about Peter knowing damn well that this show ends in an engagement 99% of the time. Even if he intended it “jokingly” in his HS yearbook, he’s obviously been interested in the show for years. He knows how the show works. It needs to end in an engagement or America is disappointed. I feel like he was setting himself up to be eliminated to become The Bachelor and/or just not that into Rachel. The Peter crazies went OFF on me… saying he “refused” all these other gorgeous women because he just wasn’t interested in them. Can you confirm that’s a big, fat lie? I know he had been “in talks” with producers for quite some time, but that doesn’t mean that he turned down the opportunity to do the show! I kinda find it haaaard to believe he refused. Can you put the Pachel crazies in their place? Oh and I was team Peter up until the end… his heart just doesn’t seem in it. Wasn’t really a huge fan of Dr. Miami initially but I guess we’re only seeing what producers want us to see…

Have you ever heard if during the overnights when cameras are not around, the lead tells the contestant “I am going to pick you” or on the other hand, “I am sorry, I am not going to pick you, but let’s just keep the charade form for entertainment purposes.” Not specifically, but I’m sure it’s happened.

I would like to listen Juan Pablo as a guest on your podcast. I am guessing is not going to happen, right?

Not sure if you saw the recent People article about Britt (http://people.com/bodies/bachelor-alum-britt-nilsson-talks-addiction-bulimia/) opening up about her addiction but I have a quick question. The screening process seems to be thorough with mental evaluations, psych tests, etc. Any idea how all of this made it past producers/casting agents? Don’t contestants go through extensive screening?

My boyfriend and I watch the show and love your spoilers. Thanks for keeping us entertained every week.

My question is, what are the guys/girls doing all day when they are not filming or on a date? Can they have their phone? Can they do anything? Watch tv? Doesn’t that get extremely boring? Nothing. They sit around and talk.

Especially in Nicks season I saw the girls posting pictures on instagram with Nick after they would have a date with him. How did they get those pictures if they don’t have their phones with them? I’m assuming the producers take them but I’m wondering if you know anything.

Do you know if there is trouble with Rachel and her “man”? I saw she did not show up for her bachelorette party this week….

I have a question about the post-show press tour if you know anything yet.

1. I already got tickets for Live with Kelly and Ryan thinking that Rachel and Bryan would be on the show on Tuesday Morning. However, I checked the guide and there was no mention of Rachel’s name on the program information for that day. Do you know if there is a change in the press tour, maybe Los Angeles for all of the post-show press instead? Not sure what the schedule is, but just because it’s not being promoted, doesn’t mean it won’t possibly happen.

2. Have you heard why Rachel did not attend an engagement party that her bachelor girls threw for her?

I was just curious why ABC has really released nothing for the new season of Paradise when it premieres in like 2 and half weeks. I get that the premier date was delayed a week, but it feels weird that they didn’t even show the full length trailer for the season at the Men Tell All. I feel like at this point last year, we at least had seen the initial cast picture taken and the initial cast’s bio pictures. All ABC is shown us is a couple of promos and it just feels weird.

Comment: We’ll get the promo next week. And they have released the cast, just not the head shots. I’m sure people are well aware it starts in two weeks. It was the talk of the summer basically all through June.