Yesterday sure was a fun day. The trolls came out in full force on Tia. She’d been off social media for about a week because she knew what was coming on Monday’s episode, and it was probably a good idea. Not to mention, the timing of what happened yesterday, just hours after I’d posted about why people have to spew so much hate towards contestants is mind boggling. Apparently a few people didn’t get that message. Of course you’re allowed to question Tia’s actions on the show, why she came back, why she couldn’t let Colton go, is she being a good friend to Becca by confronting her with that right before the rose ceremony – all totally valid points. Hell, I said the exact thing in yesterday’s column because I had those questions myself. You go on this show, you open yourself up to criticism. And it happens from everywhere. I criticize a lot of people on this show for their actions. But never in a million years am I going to anonymously email them and start spewing hatred and cursing at them. I literally said this exact thing yesterday in the column, then hours later, Tia posts on her IG story a message she received from a fan. If you didn’t see me retweet it yesterday, here it is again. You tell me if this is normal human behavior… 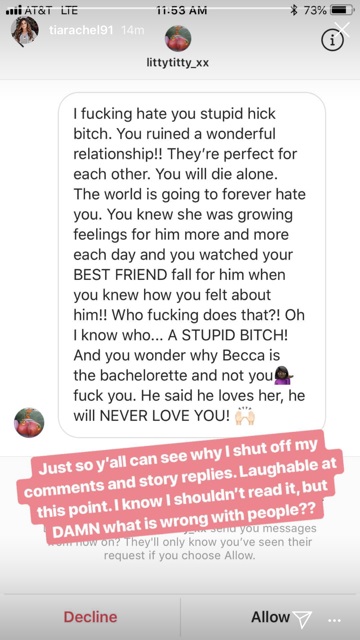 I can’t even fathom how screwed up someone is to tell her that. Tell Tia you totally disagree with how she handled the situation. Tell Tia you don’t think she was being a good friend to Becca. Tell Tia she maybe should’ve thought that whole thing through first. Fair game. But THAT? Was that really necessary? Of course it wasn’t. And that’s the point I’m trying to make. There’s a MAJOR difference between criticizing the contestants and their actions on the show, something we all do, and spreading pure hatred. That was uncalled for. Krystal got it during Arie’s season, and I defended her. Kaitlyn got it during her season for sleeping with Nick before the overnights (something other leads have done yet it was never made into a storyline), she was slut shamed left and right, and I defended her. The worst part of all this? Unfortunately, nothing will change. As long as the keyboard warriors are allowed to anonymously sit behind a computer and say whatever they want without any repercussions (outside of a terrorist threat or something of the like), this will continue to happen and it sucks. Yeah, maybe Tia reports that IG account and that person gets suspended. You know they’re just gonna create a new one and do the exact same thing to her again or move on to someone else. I don’t see how people can’t see the difference between criticism of the contestants and spewing hatred. Mind boggling.

Becca came to Tia’s defense yesterday with her say on the situation: 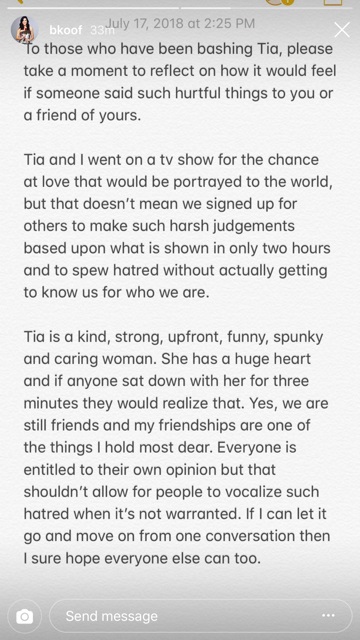 Ok, so if Becca doesn’t have a problem with what Tia did, still calls her a friend, and is over the situation, why are strangers who aren’t affected by this in any way, shape, or form so bent out of shape? How does this affect your life at all that Tia told Becca she still had feelings for Colton? You’re really THAT bothered by this? Why? For what? For whom? It’s pathetic all around, and I’m glad Tia called that person out on the carpet whoever they may be. And maybe it won’t change much, and I’m sure Tia got many more messages that sounded just like that, but at least it could possibly open some people’s eyes to the fact that, “Hey, maybe I shouldn’t take this show so seriously.” It’s all I’ve ever preached on this site for the last, oh I don’t know, 10 years or so. Embarrassing behavior. And even after I tweeted that out, some of the responses that came after that…people still don’t get it. Makes you lose all hope for humanity, I tell ya’.

Tons of you asked this week about the Life & Style report that Becca pulls an Arie this season. Anyone who asked it, I removed it from your questions, because it was probably asked 10 times this week, and I figured I’d just address it here. The first thing I’d say is read the actual story from beginning to end. Nowhere in that story does it ever say that she actually is going to or has pulled an Arie and dumped her choice (Garrett) to go with the guy she originally dumped (Blake). Nowhere. It’s not in there. It’s click bait to get you to read. Becca has not and is not going back to Blake. Now, if you want to discuss the other things in the column about how maybe she closed her mind off during filming, it was all about Garrett, and now maybe she’s realizing he’s not what she envisioned, that’s a conversation to have. I don’t think these two are ultimately going to last. I haven’t heard about any break up as of now. That’s news to me. They’re still together and engaged as far as everything I’ve heard. But it’s certainly going to be an interesting ATFR because I’m sure Garrett is gonna have to address his apology from last month, and yeah, I could see that being a little tense. I just don’t see it in the long run between these two because I think they are pretty different. Not saying people who are different can’t work. But with these two in particular, I just don’t see it.

In case you missed it, yesterday’s 2nd episode of the “He Said, She Said” podcast with myself and Ashley Spivey is now available. You can listen to it on a number of platforms, but you can also tune in by clicking the player below:

Ashley joins me to talk about how you handle keeping an ex’s pictures on your social media pages. Caller Jessica in Texas discusses a toxic friendship she’s currently having (17:35) and then Victoria in San Francisco talks about how she’s dealt with an emotionally abusive ex (42:04).