Last night’s episode was chock full of goodies. But I’m gonna try to go in order here so bear with me:

-The very first scene from this season was that flash forward of Chris Harrison talking to Peter at the final rose ceremony. And man, everyone went nuts. All season long people wanted to know 2 things: What is Chris Harrison talking about and who was Barb talking about. Well, you got both your answers this past Monday when I told you, but for the longest time, I did tell you that Chris’ talk with Peter had nothing to do with Madison. And even the day I posted the episode 1 spoilers, I reminded people of how many times they’ve been let down by a teaser. I think we can say now that was a giant letdown. Chris tells him Hannah Ann is thinking of not showing up, Peter goes and lays down on a bed, we go to a commercial, and back from commercial it’s Chris Harrison saying, “Oh, she is coming.” All that build up all season for not much of a payoff if you ask me.

-The engagement itself couldn’t have been more awkward. So many things about that that seemed off and I’m sure you’ve all dissected it to no end. But that engagement alone, knowing everything that happened afterwards, now makes more sense in its cringey-ness. It certainly now seems like Peter only chose Hannah Ann because 1) his family wanted him to and 2) she was the only one left he could’ve chosen. Very hard to convince a lot of us otherwise, but most notably, Hannah Ann herself.

-Hannah Ann couldn’t have handled herself any better than she did both when the breakup happened and during the live show. She eviscerated Peter, as she should have. What were we told by Peter’s ex Calee Lutes long before he ever became the “Bachelor?” That he’s a player, he basically dumped her to go on the show, he’s not interested in settling down, and he just wants to be popular and gain fame from this. But no one wanted to give Calee any credibility because they thought she was a scorned ex. Tell me now after watching everything you saw this season, do you honestly think Peter Weber went on this show to find love, get married, settle down, etc? C’mon.

-Everything Hannah Ann told him was well thought out, well spoken, and right on the money. He couldn’t argue with any of that, and thank God he didn’t put up a fight at the ATFR. He deserved everything she said to him and I don’t disagree with any of it. Neither should any of you really. He played her. He was never truly in love with her that final day in Australia. He tried to convince himself he was, but it’s clear now he wasn’t. I’m not sure what was going through that guy’s head, but he definitely was right about one thing he said last night: he made more mistakes this season than any Bachelor ever.

-Here’s the biggest thing I think that really had me and most of the audience confused last night. We see the proposal in Australia, then come back live to Peter and he gives a few thoughts on his feelings that day, then Chris Harrison says, “Lets see what happened next.” The very next thing shown is the Peter and Hannah Ann meeting at the CA house and them breaking up. We never saw one interaction or anything that their relationship was about to even get an understanding as to what happened. Clearly by watching their convo, THEY knew they were having issues, but we as the audience had literally just seen them get engaged, and now all the sudden they’re breaking up for reasons I still don’t know I could give you or understand. That whole sequence totally made no sense.

-Peter never gave any specific examples of what happened between them, or why he wasn’t all in, or why he was so sorry. “I can’t give her what she wants” is too generic. This is your fiancée. Not some random girl you’re dating. That conversation was as clear as mud. I heard that Hannah Ann went on Rachel and Becca’s podcast out today, so I’m sure she HAD to have at least discussed what their relationship was like and some sort of timeline, no? So until I hear that, I can’t comment. I just hope Hannah Ann isn’t continuing the company line and making it seem like their breakup happened earlier than the last week of January, because it didn’t. Not to mention, that’s certainly giving more credibility to the rumors that when Peter was at Super Bowl Weekend, people were absolutely saying he was acting single. Which we know now he was.

-Which brings us to Barb. There’s nothing ground breaking I’m gonna say that most of you don’t already think after last night. She went after a 23 year old girl on stage for something she did 3.5 months earlier in Australia and she embarrassed her son in the process. Look, I don’t think Peter and Madison have a chance in hell of making it long term, and I’ve said it all season, just because I really don’t think Peter is ready to settle down, and certainly not with someone as different and as grounded Madison. So Barb isn’t wrong in having an opinion they won’t make it. But to be so dismissive about your own son and his happiness, and to basically insult him and embarrass him on national television was just wrong on so many levels. Who does that to their own son? The best thing Peter did all night was take up for Madi when his mom was basically raging against her. And I STILL think Peter could’ve stuck up for her more.

-Peter and Madi already have enough obstacles in front of them to overcome to start this relationship, now you throw in the fact that his family absolutely HATES her. No, they don’t dislike her. They f***ing HATE her. It’s sickening. And I don’t know where this stems from. Yes, reality TV doesn’t show us everything. And clearly something Madison has done or the way she’s acted that we haven’t seen has set them off, but they definitely have it out for her. You don’t think so? Look at what Peter’s brother Jack said on IG last night, piling on Madison. 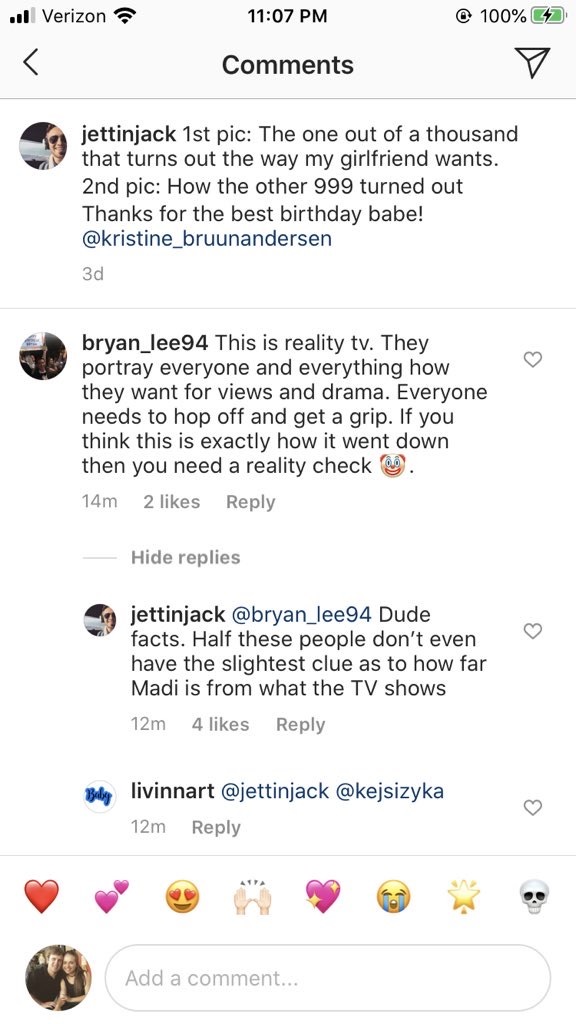 Like seriously, WTF is wrong with these people? This is your son. This is your brother. If you don’t like Madi, express it in private. Tell him you’re disappointed in his choice. Don’t pull his pants down on national television and basically kill his relationship with Madi before it begins. There is zero chance Peter and Madi make it through this. None. Hell, they might not even make it through the weekend. I just think they’re too different and I’ve said it all season. But now with this sort of vitriol and hatred coming from his own family towards her, why would she even WANT to be part of this? You think her Christian family watched that last night and isn’t gonna be an influence on HER telling her to get out of this thing? Now, if Auburn didn’t have the SEC Tournament this week and then March Madness starting next week, I’d say Peter and Madi would be finished by Saturday. But hey, maybe Peter wants to get some tickets out of this and be seen with her at the SEC Tournament this week and then the NCAA’s next week. Who knows? But as for the Weber family, what an embarrassment to treat your own son that way in public. Disgraceful and total lack of class.

-Something else that came up during that live portion when Barbara had verbal diarrhea ripping Madison and Peter’s relationship to shreds was this:

And if THIS is true, and that’s what she said to her husband in Spanish? Yikes. pic.twitter.com/7IFucCkLhm

Now, to play devil’s advocate, someone emailed me last night and said this in regards to what said:

“The Cuban accent really drops off vowels at the end of words. So she said ‘di also mas Tambien, ayudame’ or ‘say something else too, help me.’ If she would’ve meant ‘bad’ she would’ve said ‘malo’ with an O on the end. ‘Di algo mal’ would mean ‘say something wrong’ where mal means ‘wrong.’ Hope that cleared it up a little!”

Tom-aye-to. To-mah-to. The idea behind it is still the same. Barb was saying to her husband, “back me up here. Don’t you dare say something positive and support them.” Again, I cannot believe the gall of this family to act that way because they don’t like their son’s new girlfriend. I’m floored by what I saw last night.

-Also not to mention if you didn’t see this on Twitter yesterday, that what Barb said about Madison taking 3 hrs before meeting them in Australia, not apologizing, saying she wasn’t in love with Peter, and then saying she wouldn’t accept a proposal in 4 days, is all stuff Barb told someone privately on DM yesterday afternoon when they emailed her calling her out for her behavior Monday night.

I believe every word Barb said tonight bc she told someone THE EXACT SAME THING IN A DM EARLIER TODAY. Wow. She truly despises Madison. Feast your eyes… pic.twitter.com/TKPVkldKYT

This was sent to me in the afternoon yesterday and I was like, “Whoa. There’s no way Barb says this on TV, does she?” Well, she did. And I still can’t believe it less than 12 hours removed from it.

-So where does that leave things now? I’ve heard rumors last night was even worse than what went down on TV. I was told Barbara ripped into production post-show. She’s putting the blame on them for Peter getting back together with Madison.

-I was specifically told this by someone close to the situation: “What a mess. Didn’t see that coming. There could have been SEVERAL outcomes tonight and was truly shocked on that one. Lets just say there were other girls involved in that picture that weren’t mentioned.”

Sooooo yeah, Peter and Madi are doomed. I don’t buy any of that relationship we saw last night unfortunately, because now all these rumors I’ve been hearing for months of “Oh, Peter slept with so-and-so” and “Oh, Peter was here doing this with this girl,” honestly, I can’t rule any of them out. The playboy I heard about all season seems to be coming true. At first it happened at the expense of Hannah Ann, and now it looks like it’s gonna happen at Madi’s expense. Get out while you can, Madi. Don’t fight for this anymore to prove Barb wrong. You’ll never win her over no matter what you do, and honestly, you shouldn’t want to. He’s not worth fighting for, and I guarantee the stories of women he was messing around with the last 3 months are coming full force now. Get ready for them.

(EXCLUSIVE) Clare’s Guys
Clare’s Filming Possibilities, Peter & Madison Break Up, Hannah B. & Tyler, & What To Expect On The Site During This Postponement
To Top