Ok I’m gonna use this page here to just list off every rumor I heard this season, none of which I ran with. But first let me address the two things I told you I would address yesterday. First, there was this one:

I’m still trying to confirm it. I might be able to tell if it’s legit by tonight’s episode. Or it may air tonight since I don’t know where tonight’s episode ends. But even if it doesn’t end up happening, I’ll let you know what it was.

Didn’t end up being true, but, what I was told was Peter and Hannah Ann’s engagement actually didn’t happen in Australia. That they’d gone somewhere else and done it. Which when I heard it, thought it could actually make sense of Peter saying “my seasons is gonna get spoiled and there’s a reason for it.” So when this was told to me, I was like, “Hmmmm, maybe because they went somewhere else other than Australia, that’s why Peter thought I wouldn’t find out.” Good thing I didn’t run with that since it wasn’t true.

Then a few weeks ago in a column, I specifically told you I was hearing a rumor that, if true, would make me throw my hands up in the air. That source was the one who told me Clare was gonna be the Bachelorette AND they added that there was truth the Julie producer rumor and they had been hooking up. So now with everything coming out, I can’t even say that part is true. But when I was told that, they said that Peter was gonna come out with Julie on the ATFR last night, which didn’t happen. Although, it certainly seems now like it’s possible. No proof of anything, but when it comes to Peter now, I seriously can’t rule anything out.

I swear if this “Bachelorette” casting rumor is true and this guy I’m hearing makes it as a contestant, I’ll be giddy. Would automatically make him my favorite male contestant ever.

…unfortunately he isn’t on the cast list, so he’s not doing it. No need to report anything else, but just know he’s not on the show.

Ok, here’s a laundry list of all the “rumors” I heard this season in regards to who Peter was with, when, and all sorts of craziness. Well, now some of it might not be so crazy. Get ready people, I’m telling you, Peter’s philandering over these past 3 months is gonna start getting out.

-The Tik Tok Bowl Video – while it looks like that actually could’ve been true now, I’m still told it wasn’t. Was told Hannah Ann was Facetiming with her brother and talking about her eventual move to LA, not Peter.

-Peters Family Follows Kelley on IG – well, yeah, they do. And the only one. And Kelley was there last night at the show, introduced in the beginning, then never mentioned again. Lets just say ever since Super Bowl weekend (just days after he ended his engagement to Hannah Ann), there have been rumors swirling Peter spent the weekend with Kelley and they slept together. I don’t know if we can rule those out anymore. I mean, she’s definitely not pregnant like some assumed, but, where there’s smoke there is certainly some fire. And hell, you know Barb would approve of it. Look what she wrote under Kelley’s post last night: 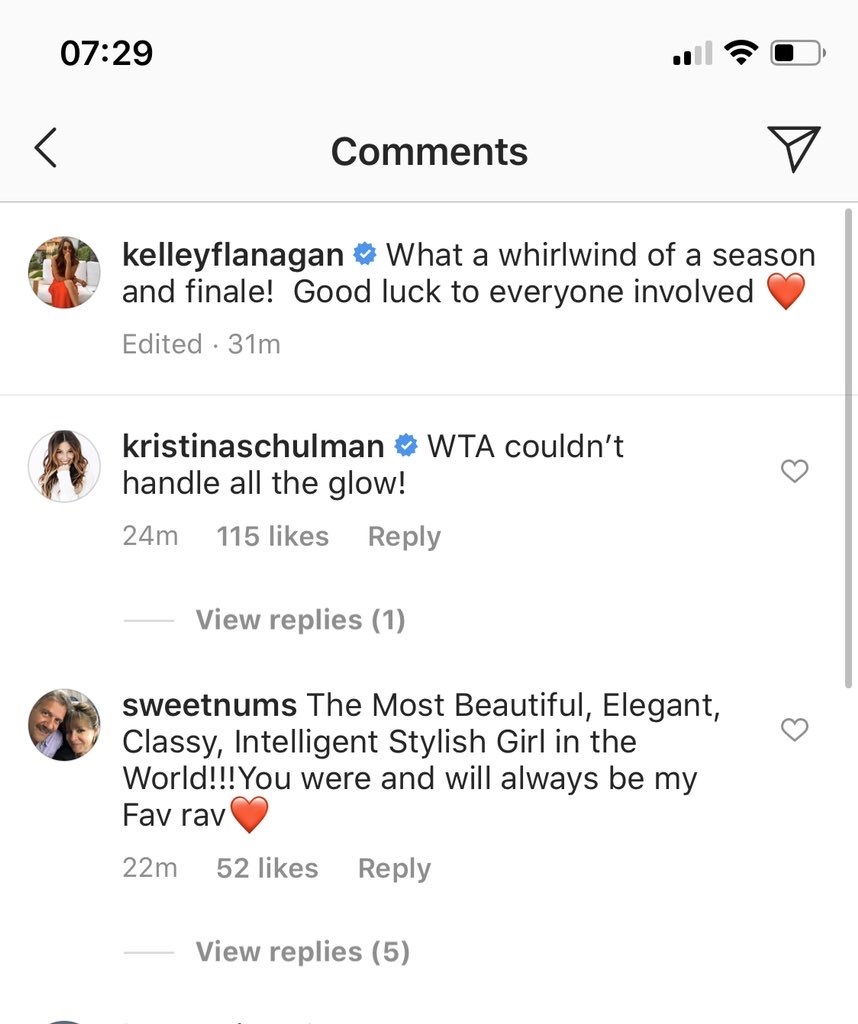 -Hannah Ann Using Peter’s Buddy Pass To Fly and See Him – another one that was never proven, but again, I was told that didn’t happen either. Would’ve given too much away and they wouldn’t be that stupid.

-Hannah Ann & Peters Venmo Both Private – I never looked into this one, but I guess it’s possible it could’ve been true.
Peter Defended Madison on Nicks Podcast – I mean, I can’t remember when that exactly happened in terms of a date, but, clearly she was in the back of his mind.

-Peter in Early Season Podcast Gives it Away – On Rachel and Becca’s podcast before the season started, everyone was convinced he picked Madi because in a word association game, they asked him to describe his “final one” in one word, and he said “Rose,” so everyone thought because Madi’s middle name is Rose he gave it away. Clearly that was wrong since he wasn’t with Madi and was engaged to Hannah Ann when he did that podcast.

-Peter Is With Someone Not From the Show – That one came up a lot this season and again, people SWORE to it that they heard through pilots at Delta that he picked someone not from the show. Ummmmm, well, that didn’t happen.

-Hannah Ann Followed Peter All Season and Madi Didn’t – Well, Peter followed neither of them all season, so it’s really impossible to read into something like that and make it so definitive.

I cannot stress this enough. You are going to start seeing stories of Peter with other women over these last few months, you’re gonna see stories about how last night was a complete joke, Peter and Madi aren’t even together, they did it for show, Peter is with Kelley, Peter is with Julie, Peter is with some other women – you’re going to hear it all. One thing I do know now is this season was an absolute dumpster fire and I believe nothing that I saw last night when it came to Peter and Madi. Maybe that’s why Barb acted the way she did, even though it was the wrong move personally, but, this is not going to end well for Peter.

(EXCLUSIVE) Clare’s Guys
Clare’s Filming Possibilities, Peter & Madison Break Up, Hannah B. & Tyler, & What To Expect On The Site During This Postponement
To Top