I know a lot of you are hoping for information on who Katie is engaged to this week. I’ll say this: I feel I’m very close to knowing who Katie is engaged to. I had mentioned last week that I was close to telling you who from the final 4 didn’t win, and I was able to get the confirmation I need. So I’m sorry if you spent a half hour watching some guy break down the season promo and deduce that Andrew was the winner this season – he’s not. That I can confirm to you. So now only 3 possibilities – Justin, Blake, and Greg. And honestly, I’m thiiiiiiiiis close to confirming that 2 of those 3 didn’t win either. This could break at any time, but I’d be pretty shocked if I didn’t have it confirmed by next week. Just like I wanted to wait until I had all 4 names confirmed before I released Katie’s final four, I just need certain confirmations before running with the winner this season. While I’ve been able to correct wrong reveals in the past, it’s not fun having to do that. So I’d rather have it right from the get go rather than reveal something I’m not totally 100% on and have to go back and correct. Bear with me. Won’t be long to get this one.

Get your “Reader Emails” in today for tomorrow’s column. I think I’m at about 12 emails so far. We usually have between 25-30 a week, so if you get something in today good chance it gets in tomorrow. Also, filled up about 50% of the spots in the 2 weeks since the announcement for the Fan Appreciation Party on Aug. 27th at the Rio Hotel in Las Vegas. If you’re interested in attending and you are out of state, you get first priority. Your confirmation into the party is your flight itinerary and a screen shot of your vaccination card. If you’re driving in, it’s hotel confirmation and vaxx card. If you’re a Vegas local, while a few have already RSVP’d, I only have a certain amount set aside for locals. If the out-of-towners don’t fill it up, then I’ll fill with locals. You’d just need to show your vaccination card. Two months away and it’s filling up fast. There is no cost for the party, but I’m working in conjunction with the Genesis Women’s Shelter & Support in Dallas this year. Any donation would help. Thanks.

On Friday I tweeted out some updated info regarding “Bachelor in Paradise” filming. Here was the thread:

-Recounted last night & actually 32 contestants had appeared through rose ceremony #3, not 30 as I originally tweeted.

-Out of the 5 pairings I gave you yesterday, 4 are no longer. Which is why I prefaced those pairings saying they were early roses.

Since then, we’ve had rose ceremony #4, and there should be one more rose ceremony before “Decision Day.” For those unfamiliar, after the 5th rose ceremony is where the show usually tells all the couples left that they must make an immediate decision on the spot to either stay together, or break up. If you break up, you leave. If you stay together, you’re offered an overnight date, and then the next day is the final day, or whatever you want to call it, where those couples either then decide to get engaged, leave as a couple, or break up. I expect that to be Friday or Saturday of this week.

Some people, like Becca, have posted on their IG stories even though they are in Mexico filming. Becca posted stories last week and this week that she 100% had scheduled, or, someone posted for her. Other people like Pieper, who had a ton of social media activity over the weekend, are actually home from filming. I have photo evidence of Pieper back in New York on Sunday, so, she’s home. Almost 40 people now have appeared on this show at some point this season, so to have EVERY storyline for EVERY person probably won’t happen. However, my goal is to get you the basics which is the rose ceremony eliminations, when people came in, who they went on dates with, and then once filming is over, who the final couples were and did they get engaged. I’ve got a lot of the rose ceremony stuff already but I want to put it all together, rather than piece it here and there. I will keep you updated once filming ends and I can put as much of it together as I can. You will have most, if not all of your “Bachelor in Paradise” spoilers next week since filming ends this weekend.

Biggest Bachelor Nation news yesterday was Rachel Lindsay writing a first person esssay for New York Magazine. Some of you may be able to read it by clicking on the link, and some it may be behind a paywall. Whatever. This is a MUST read for fans of this show. Rachel criticized New York Magazine after the fact for the title the editors gave the article. Some people are asking, “What’s wrong with ‘No Roses to Burn’” title, but that’s not what she’s referring to. The print version of this story has the title of “Oops, I Blew Up the Bachelor,” which 1) Rachel doesn’t decide which headline goes with her story and 2) That’s not what the article was about. But you bet your ass the Rachel haters, or as she refers to them in her essay the “Bachelor Klan,” will immediately form an opinion on her and the story without having read it. If you do that, you’re pathetic. I can’t stress enough how important this read is.

And yeah, Rachel’s definition of the “Bachelor Klan” is spot on. I know, because I heard from them yesterday after I posted it on my IG story. Immediately was met with emails about “Why do we have to continue to hear from her,” “she got Chris Harrison fired,” “why doesn’t she just go away,” etc. If you honestly took the time to read that article (and it’ll take you a good 20-30 minutes due its length), and you came away from that saying “Meh,” or “Whatever,” then you’re just a troll who didn’t like her in the first place. And frankly, it means you support racism within this franchise. How can anyone possibly read Rachel’s account of what she went through and not realize how behind the times production was, how awful she was treated, and how any contestants who were POC were represented on this show? Holy shit. Like, Rachel has alluded to this in prior writings and podcasts, but she’s out of contract now. She’s NEVER gone into detail about her whole duration on the show like she just did in that piece. Fascinating read. Go read it. And if it doesn’t strike a nerve with you, well, consider yourself part of the “Bachelor Klan” because there’s no other way to look at it. (UPDATE: Originally I reported this was from the New Yorker. It’s been corrected to say it was from New York Magazine).

So this story was hilarious to me. We all know about the senior “Bachelor” edition this show put out last year. They were really promoting it hard, but then the pandemic hit and it kind of got pushed to the side. Well, it looks like it’s gonna happen and start filming soon according to this Facebook post late last week by a guy who was set to be on it: 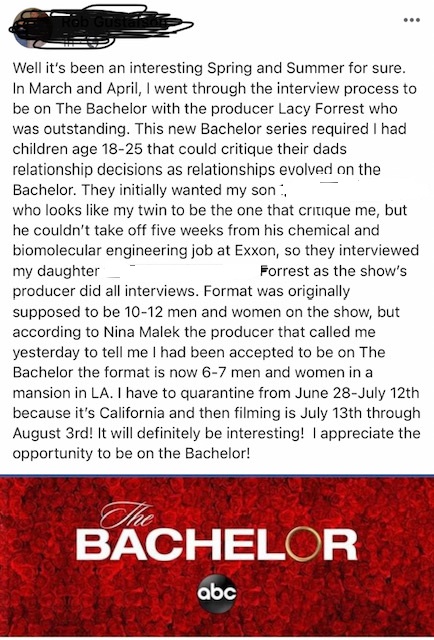 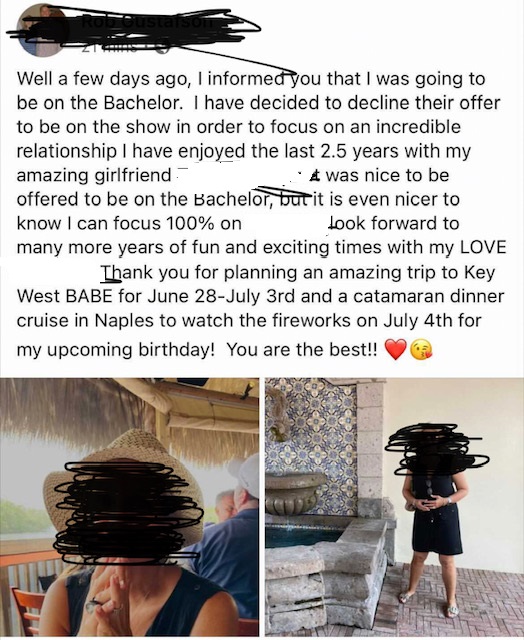 This is all types of confusing. In the first post, he was all giddy about being on the show, where seemingly older contestants would live in the mansion and date each other. Well, it wasn’t more than 2 days later when he posted the second FB post and does a 180. In 48 hrs he went from being super excited about being on the show and couldn’t wait to “yeah, I’m not gonna do it anymore. I’m gonna focus on my relationship of 2 ½ YEARS!!!” Then proceeds to tell her how great she is three times. Wait, huh? Why weren’t you gonna focus on that relationship two days earlier? She was still your girlfriend of 2 ½ years then. Who knows what the real story is here, but this was just too funny:

“Can’t wait to be on the new ‘Bachelor’ show!”
(48 hrs later)
“Yeah, not gonna do it. Gonna stick with the girlfriend I have. Can’t wait to spend many more years of fun and exciting times with my LOVE. You’re the best!”