There’s no way I can write this story out because it’ll take too long, so I’ll just tell you to go listen to my Daily Roundup today if you wanna hear a funny story regarding my trip to the Olive Garden yesterday. I mean, I think it’s funny. And I think it’s just classic me considering how much I’ve been there over the last 30 years. Fun times were had I tell ya’. Even the couple sitting next to me at the bar was getting a kick out of it. I’ve never exhibited any sort of “Karen” behavior, and this definitely wasn’t that because I was kinda joking, yet, knew I was right about the situation. Which ended up being confirmed by the manager. But just the fact that this would happen to me and I would notice it right away is something that, well, doesn’t surprise. When you’ve eaten at a restaurant on and off for 30 years, you develop a pretty good palate for what everything tastes like. The second I took my first bite of yesterday’s meal, I knew something was off. And that’s where the story begins. Go check it out on my Daily Roundup today, along with me calling out Dustin for not holding himself accountable for the Bachelors in the City podcast from August 19th. I’ll explain more below.

Before we get to the Dustin stuff, a clarification regarding a schedule change. Last week, Bustle had reported (which I quoted), that the rest of the season would play out with Part 1 of overnights next Monday the 5th, Part 2 of overnights the following Tuesday the 13th, then the finale and ATFR on Tuesday, the 20th. Well according to the Bachelorette IG account that posted the missing rose ceremony yesterday, next week will have the two overnight episodes back-to-back on Mon & Tues the 5th & 6th. The Finale will be spread out over the following two Tuesdays, the 13th 20th.

Ok, in regards to the Bachelors in the City podcast, they released their first episode yesterday since August 19th, which was the episode where Dustin defended Nate and was crucified for it in the comments, where I’d say about 95% of the women came after him for his misogynistic, sexist, and woman shaming takes. I’d tell you to go read them for yourself, but at the end of last week, the BITC IG account deleted that clip from their feed. Not surprising. Anyway, yesterday’s podcast was recorded weeks ago, and made no mention in the beginning or the end that it’d be their last podcast. Even were telling people at the end how to contact them if you had a question or wanted to be a guest on the pod. But yesterday, Dustin posted on his IG stories “Recorded this a few weeks ago. Wouldn’t have thought this this would be our last episode but I’m happy we are going out with a positive bang!” Quite suspicious if you ask me.

Honestly, there’s only one reason why they’re quitting their podcast to me. And that’s because of all the heat they took from the Nate podcast, they don’t want to have to address it, so they just bolted. I say that because 1) Why wouldn’t they release a goodbye podcast to the few people who actually do like them and follow their podcast? They release a podcast yesterday that gives no indication it’s their last one until Dustin posts on his IG story it is, something that’ll disappear in 24 hrs. 2) Their producer, Emma, was actively speaking with a sexual assault survivor to come on as a guest recently. Then 8 days ago, decided against it, but told her they were looking in to bringing on a professional because they know what Dustin said was troublesome and wanted to make it right. Soooooo, what happened to that? Here is the DM conversation between the sexual assault survivor (who emailed the BITC IG account the day the podcast came out on the 19th to express her disappointment in Dustin), and the subsequent back and forth with producer Emma. I was given permission by this woman to share their conversation. 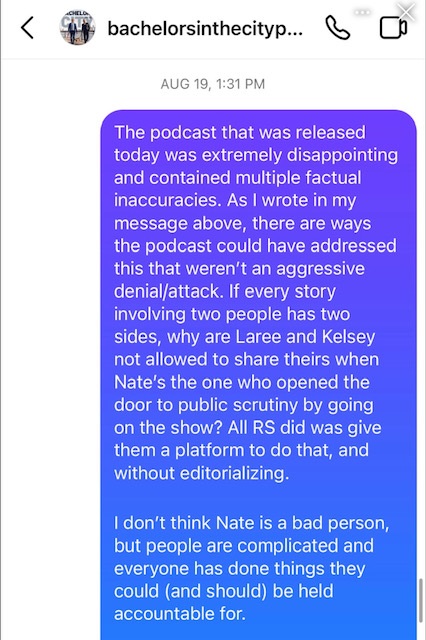 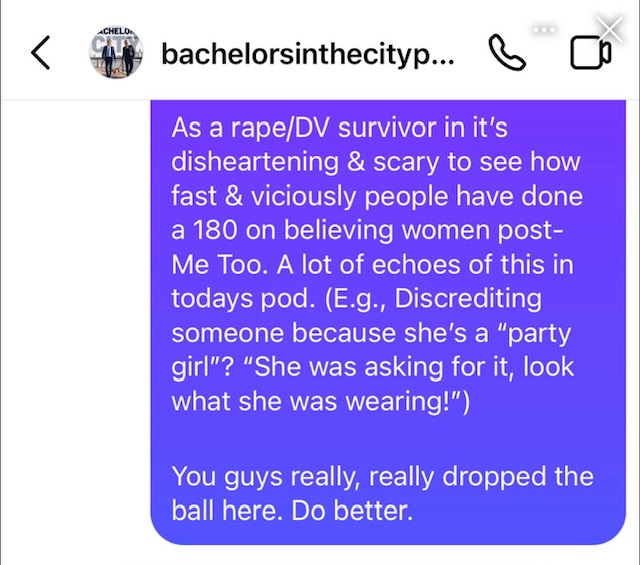 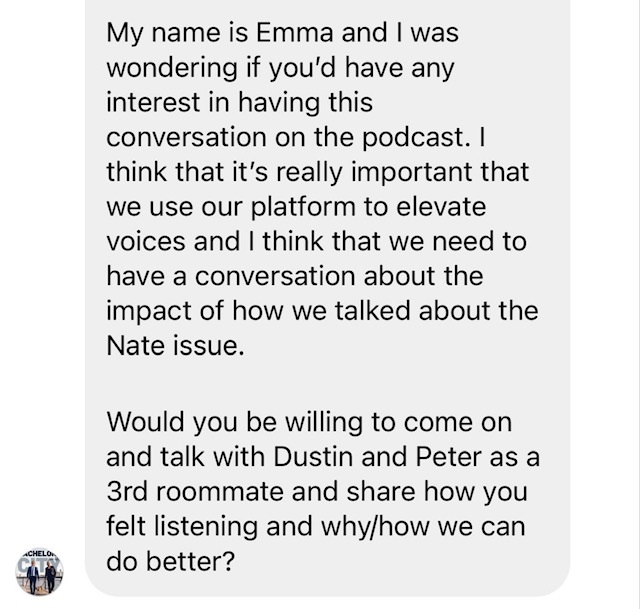 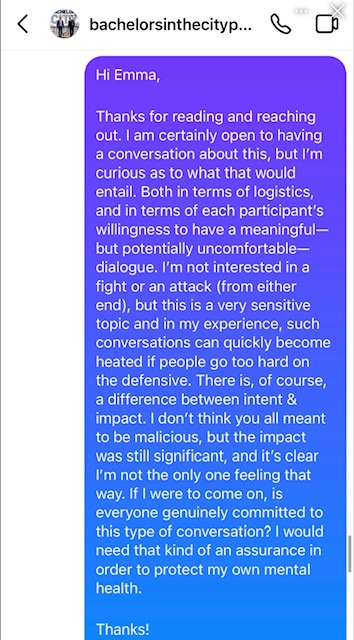 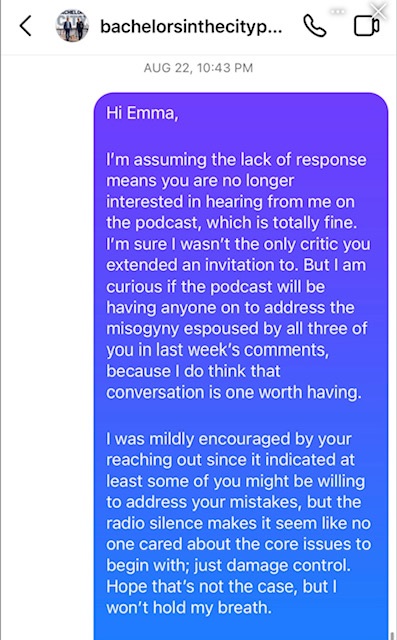 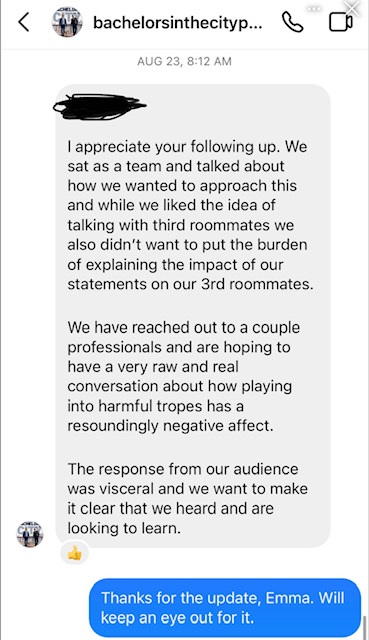 No mention here whatsoever in there that they were thinking of closing up shop and just quitting the podcast. Sounded like they actually wanted to address it and she acknowledges essentially what Dustin said needs to be addressed. Until it wasn’t.

All I want to show here is that as of a week ago, this show was full steam ahead on addressing the problematic things Dustin said on that Aug. 19th podcast that defended Nate by disgracing Kelsey and Laree and minimizing them as women. Now a week later they just up and quit without a goodbye podcast, or even saying on yesterday’s podcast it was gonna be their last one? You can tell me til you’re blue in the face, “Oh, it wasn’t making any money, oh the reviews were bad, oh Peter’s flying schedule made it too hard for them to record consistently.” Bullshit. I can put 2 and 2 together and get 4. To me, they quit because they ultimately decided they didn’t want to address what Dustin said. And if you want to quit your pod, that’s fine. But here we are still 12 days later, and you’ve deleted your IG post on it so no one can read all the factual things women were calling Dustin out for AND Dustin has still yet to say anything either on Twitter, an IG post, or in an IG story apologizing for the things he said. Chicken. Shit. Not even holding himself accountable when people are calling him out. Seems to happen a lot to podcasters in this franchise. How convenient.