On Friday last week, news broke of Garrett’s IG account that had some very shady “likes” on it. It went beyond political beliefs. It was more human decency stuff. I was emailed it numerous times on Friday, and being out of town, I just didn’t have time to sit down and address it. One person from Bachelor Nation who brought it to the forefront on her social media accounts is Ashley Spivey. Ashley was very vocal about how she felt in regards to Garrett’s like, and then late last night after the premiere, the Huffington Post put a piece together that broke down everything. Please take a minute to read that so you’ll know what I’m referring to these next few paragraphs. The only person I’ve discussed this with all weekend was Ashley. She is going to be the podcast guest this week because it’s something that needs to be addressed. We’re actually recording it in a couple of hours from this posting and it’ll be up Thursday as usual. I can tell you right now that Ashley and I are taking a much different approach to this and disagree on a few things, so it should make for a good conversation.

I understand that Garrett is already guilty in the court of public opinion right now. All the responses I saw on Twitter these last few days, in addition to the people who all emailed me the screen shots of his likes and Ashley’s IG comments are already crucifying him. Here’s where I stand: I’m waiting to hear what Garrett has to say first. There’s also a part of me that smells something fishy about this whole story. I’m not saying Garrett didn’t do this. I’m also not saying he did. I’m just saying I’m reserving judgment until some statement is made about this. ABC is in a very weird position right now. Very rarely do they let their contestants speak publicly until they’re eliminated from the show. Well as we know, Garrett is the winner, and we won’t see that til August 6th. Mainstream media has already started running with this and we’re one episode in. Last season, Lee had a sh** ton of old tweets that resurfaced pretty early in the airing of Rachel’s season, and Lee nor ABC addressed it until the “Men Tell All” in late July. I don’t know what ABC and/or Garrett is gonna do. None of us do until if/when it happens. I’m just reserving judgement until I hear what he has to say.

There’s basically only three things Garrett can say about this right now:

Probably not his best bet to go with #3. Again, this isn’t a political leaning. This isn’t a left vs right thing. This is common decency. Liking posts that perpetuate hate, transphobia, homophobia, and conspiracy theories involving school shootings (which have already been debunked), is flat out wrong and despicable. There is no middle ground here. While I’m apparently still one of the few who hasn’t gone 100% in on this, IF Garrett did like these photos, I want an explanation as to why, how, and what he’s done about it since. I will wait to hear what he has to say before I cast judgment on the guy.

You’re probably asking, “Ok, but why don’t you think he liked those photos? It’s clearly his old IG account that YOU yourself said was his IG when you confirmed him.” You’re right. I did. On Tuesday, March 27th, that was the day I identified Garrett as a contestant. Before then, outside of his family and friends I’m assuming, no one publicly knew he was a contestant on the show. Ironically, it just so happened, that day was also the day he received his first 1-on-1 in Park City, Utah. At the time I released him and up until this past Saturday, Garrett’s IG account was garrett_yrigs12. That’s confirmed. Once these screen shots were getting released, everyone jumped on him, calling him a bigot, racist, homophobic – you name it, they called him it – and spread it all over his and Becca’s IG accounts. Garrett deleted his garrett_yrigs12 IG account on Saturday. Then a bunch of fake ones sprouted up over the weekend. Accounts like garrettyrigoyen, garrett_yrigoyen, and garret.yrigoyen were all created, and not only were they fake, these people were contacting other people and trolling them. Like this woman who emailed me and immediately assumed Garrett was an asshole who was hitting on her, knowing he was engaged to Becca:

“Just followed Garrett on Instagram. He followed me back and then kept hitting on me after I mentioned I was married multiple times. Just wanted to let everyone know Becca again has terrible taste in men. I’m so sad he wins and is engaged and hitting on random girls on Instagram.” 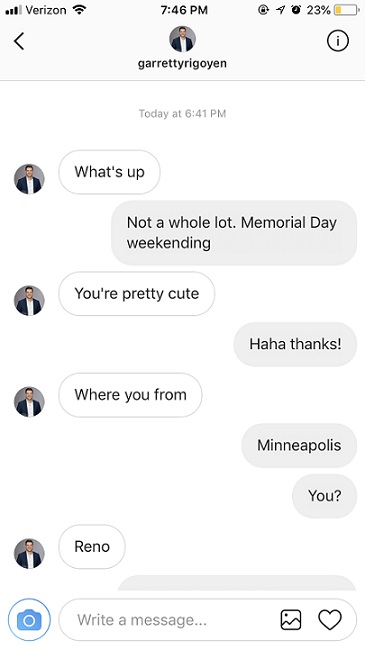 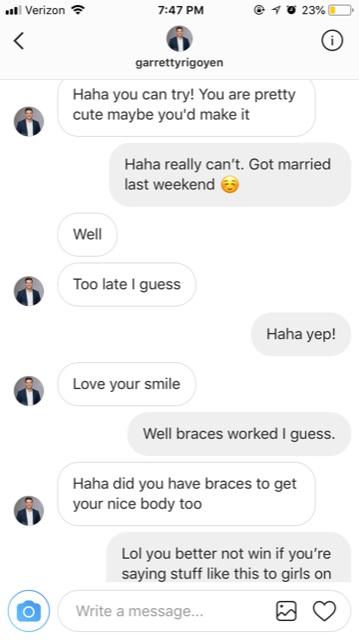 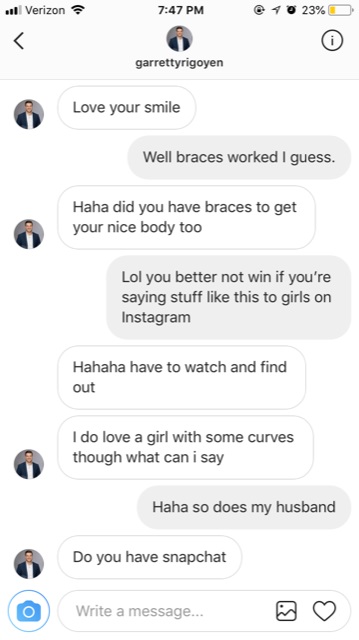 I mean, I could tell just by reading it that was a fake. But the girl in question couldn’t and immediately jumped to a conclusion. Garrettyrigoyen was never an account run by Garrett. That wasn’t him. But what it did do was show me that there are sick people out there with nothing better to do than to go out and are willing to make fake accounts and trash Garrett’s name.

Again, I’m not saying Garrett is innocent. Not at all. If he did like those posts, we need an explanation as to why. I’m just saying I’m not calling him guilty yet until I hear from him, which is different than probably 99% of the audience so far who’s aware of this story. Including Ashley. I don’t know why people aren’t preferencing this by saying “IF” he did this. It’s already assumed he did and the guy can’t post anything on his new IG account gy_yrigoyen without a bunch of hate being spewed at him. He’s obviously got filters set up now to avoid it, but that’ll only last so long. People will come up with new hate words and phrases to throw in there, that he’s constantly going to have to be updating his filters it won’t be worth it. I know the likes came from his old account, but there’s something that just doesn’t sit well with me regarding the timing of all this coming out. Hey, I could be wrong. That’s why I’m not saying he’s innocent. Ashley and everyone else might be right to slam the guy already, but I just want to hear his side first before passing judgment.

I love Ashley. This will be the third time she’s been on the podcast when she’s on this week. But I am going to run down step-by-step what issues I’m having with this. Trust me, I’m not the most savvy Instagram person. You’ve seen my IG. I post like 10 pics a year. Hell, I didn’t even know til the other day you could set up filter words in your comment section that prevents words and phrases from being seen in your comments. Clearly something Garrett did with his new account. But there definitely is a slight part of me that thinks someone, for whatever reason, has a hard-on for disliking Garrett and is after him. Maybe that’ll be debunked. There’s still things I do not know about the process and I will ask Ashley about. But this timing is certainly weird to me.

The public has known about Garrett since March 27th when I confirmed him. These likes came on posts that were posted on alt right propaganda sites in Jan and Feb of this year, along with a few likes from October thru December on 2017. Who knew to keep track of this stuff when the public didn’t know about him til March 27th? When did the likes occur? If they occurred since filming ended on May 10th, why did Garrett go back and like posts on IG accounts from 6 months ago? He’s following those sites allegedly, why wouldn’t when he got his phone back just like some recent stuff? You been on those IG’s? I did. They post non-stop. Numerous pics a day. You have to do an awful lot of digging to find those posts he liked because they were months ago. And if he liked them when they were actually posted, which was earlier than February of this year, how would anyone know right now to be looking for that six months ago? And someone just happens to have screen shots of this the day after it’s announced he’s the winner, creates that “imwatchingyouu” IG account to blast him immediately, sending it out to everyone making sure they look at their newly created IG page? People have known he’s been the front runner for months. They knew he was at least in the top 3 as of a couple weeks ago. Why wouldn’t someone post the screen shots then? And is there any chance the “garrett_yrigs12” that “liked” these posts were super imposed on those pictures from someone looking to bring him down? If someone is sick enough to create a fake account and have a fake conversation with a female to make themselves seem like Garrett is hitting on other women while engaged, is it really that far fetched to think that someone might be out to get him with these screen shots? Just throwing that out there. I don’t know. The timing of all this, and the fact that someone had this at their disposal so quickly with screens shots just gives me some slight hesitation moving forward on a conviction. I guess I just need more to go off of before I start cursing the guy on social media, blasting his IG account with more hate and calling him a bigot, racist, transphobe, etc. That’s disgusting. People, just stop. C’mon, you know me. I’m the first to jump down people’s throats on this show for shitty behavior. If he comes out at some point and admits to these likes, by all means, then I’ll have my answer and my opinion of him will most likely change. But lets hear what the guy has to say first before he gets labeled. I know that’ll go over most people’s head because they’ve already convicted him in their minds, but I’m just telling you where I stand right now.

Looking forward to this conversation with Ashley today because we’re really going to dive into this as much as we can with the basic details we know so far. She can teach me a little more about Instagram and these likes and I’m going to share how I feel about what’s going on. Regardless, everything about Garrett this season that you hear from me will be prefaced with an “IF he did this” or an “allegedly” tone until I hear him address this issue himself or through an ABC press release. I know I’m in the minority, but I have too many questions about this to immediately say he’s guilty. But I’m not saying he’s innocent either. I just need more. I don’t think there’s anything wrong with prefacing this whole story with “IF,” that’s all.