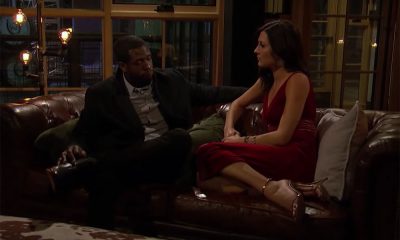 Man, I feel like I’ve been living out of a suitcase since Becca’s season started only four weeks ago. I guess because basically I have. The weekend before she began, I was in Denver for my first stop on my Summer Tour. Then two weeks after that I was in Vegas for my Fan Appreciation Party. Then this week is Tour Stop #2 as I head to San Francisco. I don’t think there will be any sort of “official” meet up this weekend, but once I’m settled in, Friday night I’ll be tweeting out where I’ll be and I’ll let people know. I’ll take any suggestions since I haven’t been to the Bay Area since college. Saturday I will be at the Giants game in the outfield bleachers Section 143 if anyone wants to attend that. I’ll be watching the game from my seat for the most part, but will also walk around the behind the seats for some portion of the game. Let me know in advance if you’re attending. Next month, I will be going to Chicago. I’m just not 100% sure right now what dates I will be there. The Cubs have three weekend homestands in July/first wknd of August, so I need to see which fits my schedule the best. I’ll keep you updated.

As I mentioned last week, we had a successful 4th Annual Fan Appreciation Party in Vegas two weekends ago. I also mentioned that next year, I wanted to go bigger. And I will. I have already secured the date & location for next year’s party. I know it’s a year away, but for the 5th Annual, I’ve secured a much bigger room so there won’t be a strict head count on capacity. I’ll cut it off at a certain point, but we have much more room next year. Everyone is invited. First come, first serve. One of the best rooms on the strip as it’s on the roof of the Rio Hotel. You’re not going to want to miss this one. Going to make this one the biggest yet. Next year’s party will be held Friday, June 7th 2019 at the Rio Suites Hotel and Casino in Las Vegas. Since it’s further down the street than Mandalay Bay (and off the strip a tad) where the first 4 years have been held, you can obviously choose to stay wherever you want, but if you want to book a room using my discount code, the rooms I will have available will be at the Venetian. I should have info on those rooms soon. Since the Venetian is my favorite hotel on the strip, figured I’d change it up and stay there next year. But the party will be at the Rio Hotel and Casino on Friday, June 7th, 2019. Put it in your calendars. Anyone interested in getting their name in early, just email me now and I will save your email until early 2019 when I start promoting it more. And hey, if you wanna book your flight/hotel now, be my guest. That would definitely secure you a spot. But I don’t expect you to this early.

Speaking of the party, since I forgot to do it last week, here were the questions from this year’s Trivia Contest (the answers are on the last page of today’s post). There were 15 questions, but 40 points total. If there’s parentheses in the question, that’s how many points were available for that particular question. The winning team got 37 out of 40, which I still can’t believe. And no, they didn’t even cheat. They missed 1 on question #1, 1 on question #5, and 1 on question #9. That was it. Amazing. So here were the questions if you want to take it yourself and not cheat to see if you can beat 37 points. Good luck…

2. (2) Name the two places they visit during Becca’s season that they also visited during Ben Higgins’ season?

3. True or False: Peter got Rachel’s first 1-on-1 date of the season last year.

4. Colton, as we know, dated Tia before going on Becca’s season. Colton also has the same last name as a very famous country star, Carrie Underwood. Both Tia and Carrie are originally from small towns in the Midwest. Can you name them?

5. (6) Also this season, Becca’s season has 6 guys whose names begin with J. Name as many as you can.

6. (4) Who were the four couples who came out of Winter Games? (Talking about when it ended but before they came back to film the “finale.” Meaning Clare & Benoit is NOT one of the answers).

7. Which one of the twins is dating Vegas Golden Knights hockey player, William Karlsson. Haley or Emily?

8. Meredith was recently a podcast guest. She was on Bob’s season of the “Bachelor.” Which number “Bachelor” season was Bob?

9. (3) There have been 4 seasons where the show went to Thailand. Obviously we know Becca’s this season. Name the other three seasons they went there.

10. (6) Name all the couples from this franchise that have gone on Celebrity Marriage Boot Camp?

11. Arie was supposed to be the “Bachelor” a few seasons ago, but they went with someone else at the last minute. Who’d they go with?

12. What was the last season where the final rose ceremony was held at the mansion?

13. True or False: Not counting Becca’s season, there are currently 5 former “Bachelorettes” still with the guy they chose.

14. Where was Nick’s final rose ceremony?

15. (3) In the last 10 seasons (Bachelor and Bachelorette), the overnight date location has been different than the final rose ceremony location three times. Name those three seasons.

Raven and Bekah went at it a bit over the weekend on Twitter, in case you missed it. My opinion is this: this never should’ve happened. Bekah didn’t HAVE to tweet what she did, but she wanted to get a rise out of people. Knowing Tia couldn’t respond, she knew exactly what she was doing when she tweeted that out. She’s quite calculating in what she does. As for Raven, I totally get her sticking up for her friend while she was away filming, I get that. But it was never going to accomplish anything. They went back and forth and nothing was resolved. Hence the reason it’s pointless to ever bother getting in a Twitter back and forth with anyone. I’ve posted over 12,000 tweets, and none of them have ever been a back and forth with anyone that carried on for multiple tweets. And there have been plenty of occasions where I easily could’ve. I just don’t see the point. But I get why Raven did what she did. I think even she realized it was going nowhere, hence the reason she deleted a few of them. Bekah has a hard on for Tia, that’s clear. Still isn’t over what happened on her season, her tweet even alludes to that. But in my mind this whole situation is so much more on Colton than it is Tia, I just don’t get it. But no point in going back and forth on it. Those that don’t like Tia don’t see it that way so I’m not going to try and convince them. We’ll see how BIP plays out then take it from there.

In other “Bachelor” world news over the weekend, Jared and Ashley got engaged Sunday down in Paradise. I have nothing to add to this. I do not care. The only thought I took from this news was I’m curious as to how Kaitlyn truly feels about this. I don’t expect her to say anything publicly. But assuming Jared and Ashley do eventually walk down the aisle, you know damn well ABC is televising it. And here sit Kaitlyn and Shawn, their longest running engaged couple, and apparently have never even been approached about televising their wedding. Yet Ashley and Jared will get one after dating for two months. Seems fair.

Ratings are in from last night and Becca’s season held steady to what it’s been producing all season, which is 5.5 to 6 million viewers (5.67 last night) and a 1.4 rating, which won the night for any show on network TV in the 18-49 demo. However, the “Proposal” were the ratings I was most looking forward to. I knew the curiosity factor would get people to at least watch the first episode to see what the train wreck was. It drew 3.85 million and a .8 rating. Meh. The key is to see what it does next week and the following weeks to see if they can keep their audience. My guess is no. The show is f***ing awful. And I think they know it is since they’re basically openly mocking the contestants who are on the show. It’s embarrassing, the formula isn’t original at all, and no one cares if any of these couples stay together anyway since we have zero time invested in them. It’s shock TV, which is what Fleiss is known for. Jesse Palmer attaching his name to this flaming dumpster fire is amazing. He doesn’t need this. Oh well. His career, not mine.