Yay Super Bowl! Or not. Man, what a letdown. Obviously not if you’re a Patriots fan, but since I’m a guy that has no rooting interest in any NFL team, yet I watch it every weekend, when it comes to the Super Bowl I’m looking for a compelling game. And frankly, it failed on every level Sunday. 14 punts, 16 total points (the lowest in SB history), one play run in the red zone all game (ONE!!!), and 6 total plays over 20 yards. Did you know that last years Super Bowl had 5 TOUCHDOWN plays over 20 yards? Yeah, for all the purists out there that are sick of offensive football and wanna see some defense played, congrats, you got your wish. But don’t tell me the game was exciting or intriguing. It was only in score because the game was close, but nothing about that game was remotely interesting, compelling, and/or fun to watch. When Nantz and Romo are joking about punts being the longest in SB history, you know you’ve got a dud on your hands. It was what it was. The Patriots are a dynasty we’ll never see again in football, the Rams made zero adjustments all game, Todd Gurley’s face should be on the back of a milk carton, and Jared Goff’s perpetual dumb face might be my lasting memory from the game. Just awful to watch, and that’s coming from someone who loves football.

Don’t forget to get your “Reader Emails” and “Dr. Reality Steve” emails in this week, as right now, we’re a little low. “Temptation Island” episode 4 is tonight and, well, we get something tonight we haven’t seen yet all season. I don’t think it’s too hard to figure out what it is, but I’ll let you see for yourself. If this preview clip isn’t a clue, then I don’t know what is:

Lets just say this week’s talk with Kaci on the podcast will be quite interesting to say the least. I’m nervous for what’s about to happen.

Now, the big topic at hand after last night’s episode is Cassie and her “other” show. I’ve talked about this for the last 3 months, but yet, here we were last night after tweeting about it, and people still up in ire and freaking out not having a clue. Just goes to show that no matter how many times I bring something up, or how many times I repeat myself, there will always be someone (in this case, multiple people) who are hearing it for the first time. Yes, Cassie is on another reality show that was released last night. It’s called “Young Once.” First season aired 4 years ago as it followed students at Biola University manage their way through a college that makes you sign a contract which prevents drinking and sex among other things, something most kids go to college for. I never watched it, but once Cassie was announced as a cast member on Colton’s season, obviously I’ve heard a lot about it. Well, season 2 dropped their first episode last night and will every Monday night through March 11th (same as “Bachelor” finale as far as we know), that you can view on this site: https://www.youngonce.ca/

Here’s what I can tell you about season 2. I’m repeating myself here, but after the reaction to my tweet last night that people didn’t even know she was on another show, I guess it’s necessary. Season 2 filmed from mid-August to beginning of September. Colton’s season started filming Sept. 20th. So yes, Cassie was filming this show knowing she’d be going on the “Bachelor” a couple weeks later. Yet, what I can report to you is that Cassie never brings this up on the show. I don’t know why she didn’t, although I’m sure she’ll use the “I wasn’t supposed to tell anyone” excuse, but c’mon. Season 2 focuses on her relationship with her on again, off again boyfriend Caelan and what they’re going to do going forward. Obviously they didn’t end up together at the end, but do you think maybe just maybe they didn’t end up together because she was about to leave and film another dating show? This isn’t a fling. This isn’t some random guy. This is a guy she’s been with on and off for 5 years. I think it would’ve been appropriate to tell the guy who you JUST FILMED A SHOW WITH ABOUT YOUR RELATIONSHIP that you are about to go on America’s most popular dating show where the end result is an engagement.

I know the Cassie defenders will say she didn’t owe him anything, and I’ll say you’re being short sighted. Again, just because you like Cassie doesn’t mean she didn’t handle things correctly in this situation. And I’d say that for ANYONE who leaves to go on this show and doesn’t tell the person they’re involved with they’re doing it. I’ve called out numerous contestants over the years, male and female, for doing this exact thing. Cassie is no different. But probably even moreso because she filmed a dating show about her relationship with an ex, weeks before leaving, and never mentioned once she was about to go on the “Bachelor.” To me, that’s just shady. No other way around it.

Here’s also something interesting from last night. After I sent out that tweet about “Young Once” airing, someone sent me a screen shot of Cassie’s cast bio on their website. This is what it said (at the time): 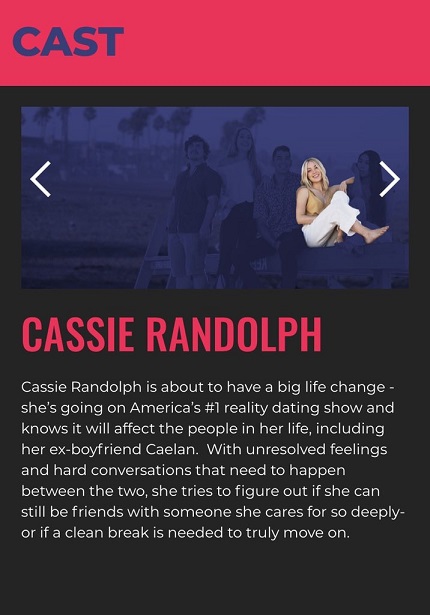 One would be led to believe by that bio, it’s acknowledged in the show that “Bachelor” is on her plate and she’s juggling what to do, or somehow that plays a role in the show. Well, not an hour later, her bio was changed and now it says this: 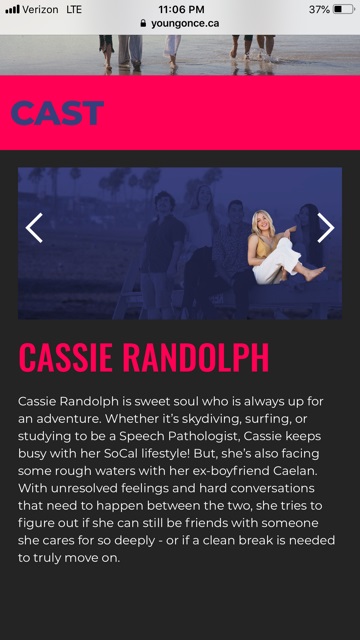 Zero mention now of going on “America’s #1 reality dating show.” Sooo yeah, your proof will be when you watch every episode, you’ll see the topic of her going on the show is never brought up to her ex, but I’d say changing that cast bio within an hour is probably more evidence as well.

Does this make Cassie the worst human being alive? Certainly not. Is she a horrible person? No, not at all. Should she be burned at the stake? Well, no. But don’t tell me this isn’t somewhat shady. And especially knowing how Colton’s season ends and what she does makes it even that much more bizarre. Explains a lot, but yeah, I just don’t think it’s a good look for her. Too bad she won’t be able to address this until after the season, if she even does. And yeah, I do think the “I’m not able to tell anyone I’m going on the Bachelor” will be her reasoning. While technically that is correct, if I knew Cassie was gonna be a contestant and I don’t even know her, I’d think her ex of 5 years who she just shot a show with should’ve known. This will be a fun debate the rest of the season because I know Cassie is beloved after last night’s episode. And yeah, she’s great. I can see why she’s everyone’s favorite. I like her too. But the optics of this don’t look good.

One season has nothing to do with the other. I get that. She filmed “Young Once” right before she left to film the “Bachelor.” There’s zero overlap. However, if you look at the content matter of both shows, and what the end result is, I’d say it’s definitely relevant. If she ended “Young Once” season 2 by telling her ex Caelan, “It’s over, there will never be us ever again, leave me alone,” then there’s no story here. But (SPOILER ALERT), that’s not the way it ended. It’s not like she left that show in a relationship with him, because that wasn’t it either, but to not even mention you were going to film the “Bachelor?” Eh, not sure that’s the way to handle it. More to come on this I’m sure as the season continues…

And lastly, episode #15 of the “He Said, She Said” podcast is now up. You can listen to today’s podcast on a number of platforms, but you can also tune in by clicking the player below:

Ashley joins me to talk about how we don’t always have to have serious calls on this show. Then our first caller, Catie in Connecticut, is gay and likes her best friend but doesn’t know what to do about it (5:20). Then Adrienne in freezing Indiana joins to tell us about her struggles dating as a single mother (28:07). Original theme music provided by Kate Bass and the song is titled “Blink.”