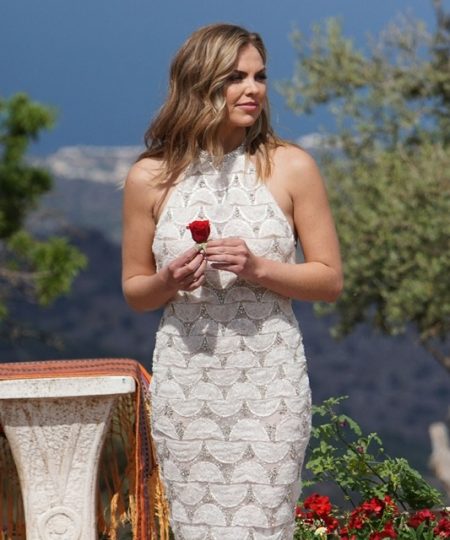 We all know the main attraction is tonight and nothing you saw last night should’ve been the least bit surprising. First up was the Peter breakup along with him on the couch still sad by the breakup as his family watched on. Kinda weird for the final 3’s family to be sitting in the audience, however, they all live close to the studio in LA, so that could’ve had something to do with it. If Peter was from, say, any other state than CA, I’m guessing they wouldn’t have been flown in. But they’re local, so I guess that helped in that decision to have them there. Of course, once Peter had his couple segments on the stage the predictable chatter began of, “Oh, well that was totally his Bachelor audition. It’s obvious it’s him.” Wait, I thought last week was Mike’s Bachelor audition and it was obvious it was him? Same thing, different season. The newest dumpee is the one that people claim will be the new “Bachelor.” We don’t know. No one knows. The announcement isn’t coming tonight. They haven’t announced the next “Bachelor” on the ATFR in 6 years. It’ll be announced in another month towards the end of BIP airing. We know who the candidates are. No one’s been chosen yet, no one’s been guaranteed anything yet, and no one’s been told they are the “Bachelor.” Just remember that until the announcement is made.

Yessss!!! We’ve finally returned. Episode #20 of the “He Said, She Said” podcast with Ashley Spivey is now up. First one we’ve done in 2 months and it’s a good one. You can listen to today’s podcast on a number of platforms, but you can also tune in by clicking the player below:

Our first caller, Anne in Montana, tells a story of a horrible Human Resources nightmare that she’s dealing with at work (3:38). Then Laura Anderson, a licensed psychotherapist who specializes in domestic violence, joins us to discuss Mandy in Philadelphia’s call from last Thursday’s podcast, as well as discussing Luke P. this season (33:31). Original theme music provided by Kate Bass and the song is titled “Blink.”

It was great to have an actual licensed professional on the show to give their input of what they heard in Thursday’s call. Ashley and I are not professionals, nor do we ever claim to be. We’re just a outlet for people to share their stories. I think Laura really does a good job in breaking down Mandy’s call and what she’s dealing with. Laura’s website is: www.lauraandersontherapy.com. Also, Laura has just written a 100 page manual on domestic violence that she’s willing to give out free to anyone who’s interested. Just go to her site, email her, say you heard her on the podcast, and she’ll send one out to you. Whether you’re in an abusive relationship yourself, or know someone who is, this manual can no doubt come in handy.

Don’t forget your “Bachelor in Paradise” episode-by-episode spoilers were posted last week. I remind you of this because I’m still getting people asking me, “Is Peter on Paradise?” and “What about Luke?” So yeah, it’s all in there. All your incoming dates, your eliminations, who made it to the end, who got engaged, etc. All there. Go read it, enjoy it, and then watch as the fun begins next Monday night. Remember, Paradise airs every Mon & Tues night for 6 weeks.

Ali Manno (Fedotowsky) and Rachel Lindsay having a podcast that’s dropping tomorrow. Demi and Peter will be there first guests on it. I know that Peter will address the Calee situation on their podcast, so, I’m sure I’ll have something from Calee on Thursday as well. Everyone’s doing podcasts now. It’s what people do. I worry about mine and let others do theirs. Like, I have zero opinion on Ali and Rachel doing a podcast together. Good for them. Doesn’t have anything to do with me, so I’m not interested in talking about it. You know what I’ve done for 2 ½ years with my podcast you’ll know after a few weeks what they’ll do with theirs. It’s whatever. But of course I will address what Peter says since it’ll be his first statements about Calee since her story broke. Ali and Rachel will definitely ask him about it and I’m sure Peter will definitely answer. And then Calee will respond accordingly if need be.

Ratings are in and beginning to sound like a broken record here, but the “Bachelorette” had it’s highest episode of the season with 7.1 million viewers (600,000 more than any previous episode this season), and a 1.9 rating. And tonight will absolutely beat last night’s rating since this is the big finish. Just remember, Hannah’s premiere episode did 4.67 million viewers and a 1.3 rating. They’ve gained 2.5 million viewers over the course of the season and their rating has gone up almost 50% (did I do the math right there?). I’m gonna look tonight and see if ANY past season had that big of a spike in total viewers from first to last episode. That’s a huge jump. So yeah, the moaning and bitching and whining all season about Hannah or the Luke P show falls on deaf ears. No one cares. The show is drawing huge numbers.

I knew by doing last Thursday’s podcast, if it could help one person out there then we were doing our jobs. Page 2 of today’s column has just some of the responses that it garnered, and to say I was blown away would be an understatement. Always good when you see people responding in a positive way to what you’ve done. So check those out on Page 2. The recap will begin on Page 3…